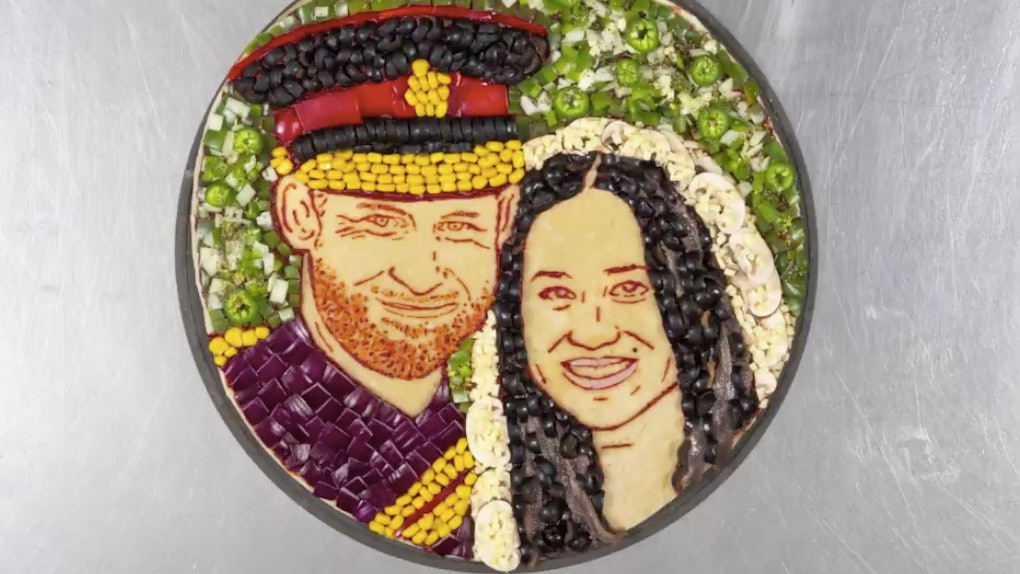 If you haven't already noticed, everyone is super excited for the royal wedding to take place on Saturday, May 19. It's all the rage on Twitter, and it's been soaking up an inordinate amount of international news coverage. Aside from "Yanny or Laurel," it's pretty much everyone's main focus right now (and I love it). Anyway, the royals appear to be taking over the world of food, too, because Papa John's royal wedding pizza exists, and it has Meghan Markle and Prince Harry's faces on it. If you haven't already seen it, prepare to be amazed.

At long last, Prince Harry and Meghan Markle are celebrating their wedding, and so is Papa John's. In honor of the big event, the pizza company created the most regal pizza I've yet to see. No, it's not covered in diamonds, and there's definitely no 24-karat gold crust involved. However, it's totally decked out with a portrait of the soon-to-be newlyweds. According to a press release, Papa John's created the masterpiece in collaboration with talented U.K.-based artist, Prudence Staite. This is truly the only thing I want to be eating right now. I mean, really, are you seeing what I'm seeing? This 'za is marvelous.

I can't imagine how much time and effort it took for Staite to perfect this masterpiece. It appears to have taken a great deal of careful chopping, an extremely steady hand to outline the couple's faces in sauce, and, of course, some super cautious vegetable placement. You can clearly see the fine detail in Prince Harry's beard, in Markle's hair, and in her dimples. It's actually pretty amazing, considering the fact that the artist's canvas is a pizza crust.

OK, if you don't consider this to be the absolute highest level of artistic talent, I really don't think we can be friends. My new aspiration is to become a pizza artist. This looks beyond delicious, and I seriously cannot fathom the meticulous process the artist took to make it. Let's face it: This pizza is really freaking well done.

It turns out that this isn't the first time Papa John’s has created a specially decorated pizza to honor the royals. In fact, this is the second one they've made so far. To celebrate the royal matrimony of Prince William and Kate Middleton back in 2011, Papa John's created a relatively similar pie, replicating the couple's portrait. Again, the details are incredibly spot-on, and it really makes me wish I was endowed with a little more artistic talent (beyond stick figures, of course).

Since this pizza unfortunately isn't available for purchase, I'd recommend making Tostitos' "wedding cake" dip for your royal wedding viewing party instead. Tostitos created a recipe for a seven-layer "cake" recipe for the royal wedding, and it's definitely worth a shot. The recipe is posted to their website, and it pretty much instructs readers to evenly layer out two jars of Tostitos Salsa Con Queso, two packages of Sabra guac, two jars of Tostitos Queso Blanco Dip, two jars of Tostitos Chunky Salsa, two cans of refried beans, two packages of sour cream, and one package of cherry tomatoes on top of each other in small, medium, and large glass serving bowls. Then, it instructs you to stack the bowls like a wedding cake. If you want to eat like a king, I would definitely go for it.

However, I know art when I see it, guys — and pizza art is definitely art. This is getting me way too excited to finally watch Markle and Prince Harry tie the knot, and even though I can't down this pizza myself, I am 100 percent admiring it from afar.