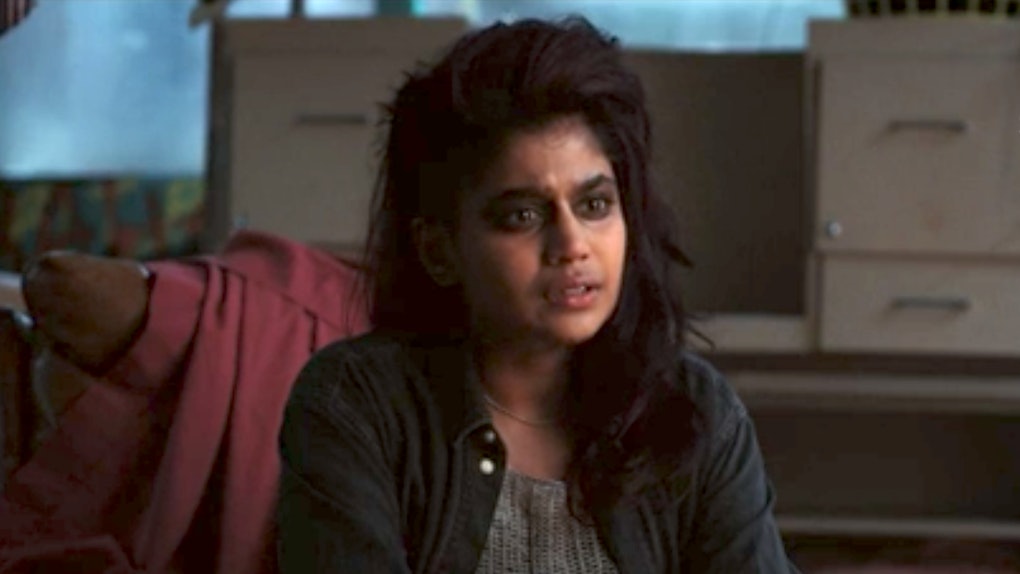 Other Missing Kids On 'Stranger Things' Will Definitely Set Up Season 3, But We Still Have Questions

Most of the second season of Stranger Things revolved around the Hawkins crew confronting and taking down another powerful monster from the Upside Down, but the one episode set entirely outside of Hawkins may actually be the most important part of the new season. Warning: This post contains spoilers for Stranger Things Season 2. In Episode 7, Eleven sets off on her own, boarding a bus to Chicago to find another girl who was captured and experimented on alongside her throughout their youth. Although Eleven decides to return to Hawkins rather than stay with her long-lost "sister," Kali/Eight's introduction seems to set up Stranger Things Season 3, so now we're all left wondering if we'll see her again in the future... and if Eleven will try to find the rest of her numerically named "siblings."

Honestly, when I was watching the first season of Stranger Things, I didn't even think too much about the fact that Eleven's name implied there were at least ten other superpowered kids potentially out in the world, but after finishing Episode 7 of Season 2, it's the thing that's most piquing my interest. Since we really only got one episode with Eight (and it was like, a really fun and cool episode), I feel like the show is setting her up for more to do in Season 3. Or, maybe it was meant to spur Eleven's search for more of her psychic siblings in the next season. All I think we can say with some degree of certainty is that Eleven's past and the people that were part of it will be a major part of the next season.

Eleven learns about Eight (or, I guess, unlocks the memory of her?) an episode earlier, when she finally meets her catatonic mother Terry Ives and gets a glimpse at her birth and early childhood by establishing a psychic link. Ives' memories show Dr. Brenner taking Eleven away immediately after she was born and raising her in captivity alongside another young girl. After coming out of her mom's memories, Eleven is able to use her powers to locate the other girl, and sets off to find her in Chicago.

Viewers actually first met Eight (real name Kali) in the very first scene of Season 2, when we see her fleeing from the police with a group of criminals in a heart-pounding car chase. When Eleven finds her living in an abandoned warehouse in Chicago, she and her crew are just as intimidating as we saw in that first scene, but they take Eleven in once Kali realizes she's a fellow Hawkins Lab survivor. Eleven shows off her telekinetic abilities, and Eight explains that her power lets her make people see anything she wants. Eight also introduces Eleven to her menacing crew; a hodgepodge of tattoos, piercings, and interesting hairstyle choices whom she says she bonded with over being outcast by society.

One gothy, punk makeover later, and Eleven is joining them on a mission to kill the man that was responsible for electrocuting her mother and relegating her to her current incapacitated state. The one-off episode stands out from the rest of the season not only because it's focused solely on Eleven, but also because it shifts the tone from the usual '80s sci-fi drama to something more similar to a high-octane action movie packed with crime, shootouts, and car chases. But, most of all, it gives us a ton of questions about Eleven's past and how she will continue to confront it moving forward. For instance, Eleven also learns that Dr. Brenner, whom she assumed had died in the Demogorgon attack at the end of Season 1, may still be alive.

So, will we be seeing Eight again in Season 3, or maybe meeting one of the other numbers? After that explosive episode, I think it's a given, but you really never know. Maybe the Stranger Things team is instead setting up some superhero spinoff where all the numbers come together to get revenge on the Hawkins Lab scientists? I mean, I'd watch that.