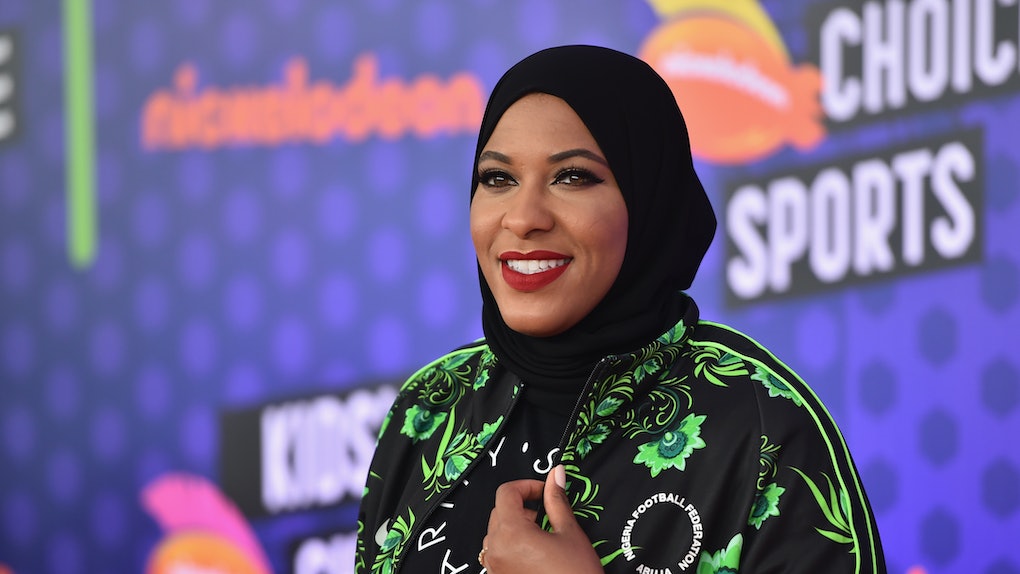 Olympian Ibtihaj Muhammad's Advice About Anxiety Hits Home, Even If You're Not An Athlete

Have you ever had that feeling of immense pressure residing in your chest, compressing and consuming you, making it difficult just to breathe? If you know what I'm talking about or you've experienced something similar, you probably struggle with anxiety, and you're certainly not alone. Yes, at times, it might feel like you're the only one in the world who's dealing with these often-crippling feelings, but the truth is, even your biggest role models, celebrities, and athletes battle mental health issues every day — which is why Ibtihaj Muhammad's advice on anxiety is incredibly inspiring, to say the least.

Ibtihaj Muhammad is the first Muslim American woman to represent Team USA at the Olympics in hijab, as well as the first Muslim American woman to win an Olympic medal, and in a recent interview with Glamour, she had some stellar advice about how to manage anxiety. The 32-year-old athlete, who competed as a fencer in the 2016 Rio Olympics, is completely honest about her struggles with anxiety, which is so refreshing to see from such a powerful woman, particularly one who, from afar, truly seems like she has it all together, all the time.

In her interview with Glamour, Muhammad revealed her experience with something called performance anxiety.

According to the sports psychology resource Expand the Reach, performance anxiety (specifically in athletic competitions), which is sometimes referred to as "choking," is basically when an athlete feels they're under so much stress and pressure that there's a decrease in their overall performance. Whether it's the anxiety of having a huge crowd to watch their every move, or expectations placed upon them by coaches, performance anxiety is a very real thing that affects so many athletes.

In Muhammad's experience with this type of anxiety, she told Glamour that, at first, she had "no idea what was happening." She described the feeling,

The morning of a competition I’d wake up feeling lethargic and sleepy — overwhelmingly so — despite having had a good night’s rest. At game time I’d [go] onto the fencing strip and feel completely detached from reality.

In her interview, Muhammad also described feeling cool sensations wash over her body whenever this anxiety hit, and how her arms and feet felt as if they were "made of lead." It was as if, she told Glamour, she knew she was "going to lose a match before it even started."

These are all very common things to feel when you have anxiety, and as someone who suffers myself, I can totally relate. According to The Guardian, when someone has anxiety, it's not uncommon for their brain to make "incorrect decisions about what to fear," which can cause the body to slip into an unnecessary fight-or-flight mode, and that can sometimes feel exactly the way Muhammad described: strange, cool sensations, heavy limbs, certainty for bad outcomes, etc.

Muhammad told Glamour that once she realized her performance anxiety wasn't going away, she started seeing a sports psychologist so she could learn some healthy coping mechanisms and get back to feeling like herself.

Muhammad shared with Glamour some of the methods she's learned to manage her anxiety, and they're seriously spot-on.

She told the outlet,

[My psychiatrist] gave me exercises I could use whenever I felt the symptoms coming on, to deescalate my mind from its anxious state. Every morning I’d spend 15 minutes in prayer and meditation, which helped me start my day from a calm, centered place.

The simple act of breathing, unplugging from technology, and staying present first thing in the morning is a great idea for anyone, but especially for people with anxiety. According to Harvard Health, mindfulness and meditation are extremely effective tools for calming the irrational thoughts and intense bodily sensations that often happen with anxiety. What's more, the deep breathing that you engage in during meditation can help your brain get out of that fight-or-flight response, and into a more relaxed and centered state. While Muhammad presumably does these things to prepare for fencing competitions, you could easily apply these strategies to anything that makes you feel anxious, whether it's a presentation at work, a job interview, or even a first date.

Dealing with anxiety is a constant battle and a life-long journey, but Muhammad perseveres by owning her struggles and showing them who's boss. As she told Glamour, "we can all learn to be our own best cheerleader," and really, I couldn't have said it better myself.