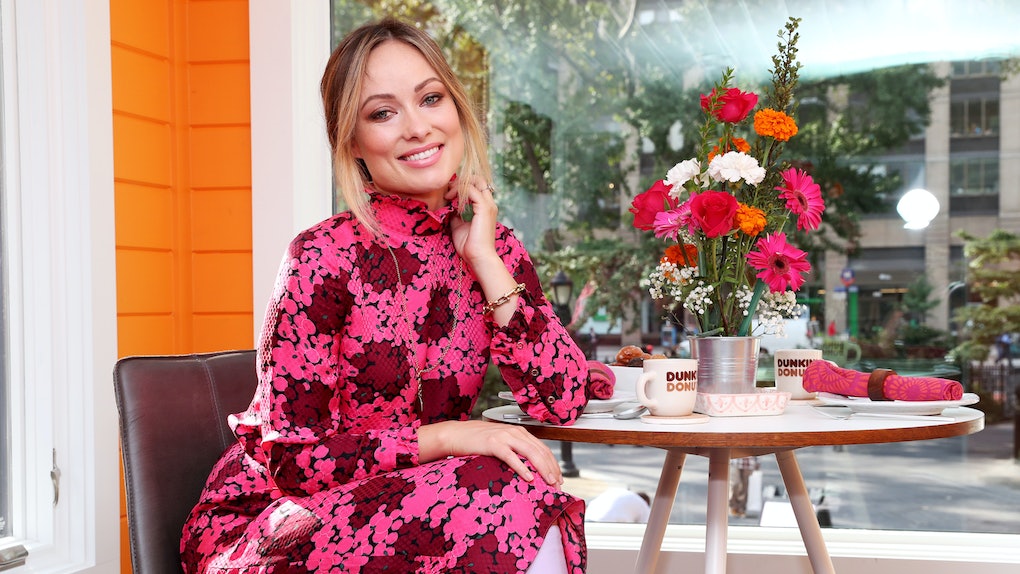 Olivia Wilde is, by all accounts, a superstar, and I don't just mean it in the way that she's a successful, award-winning actress. I mean that she's managed to balance a demanding career and a family, and she seemingly does it all with grace and ease. She's that kind of superstar. But there's much more than meets the eye, apparently, and, in speaking with her, I realized that juggling all of those things simply wouldn't be possible without the help of her fiancé, actor Jason Sudeikis. And honestly, Olivia Wilde's comments about Jason Sudeikis will make you believe that these two are the ultimate #RelationshipGoals.

When I ask Wilde how she and fiancé Jason Sudeikis work together to keep up with such demanding careers while also taking care of their children, 4-year-old Otis and 2-year-old Daisy, she tells me that it's a difficult balancing act, but absolutely worth it. "Having two kids is the greatest thing that’s ever happened to us," Wilde tells me. "We love them more than anything, and I think we both feel that family comes before career. But we do love our jobs, and we have a lot of fun with our jobs, and we have a pretty great partnership in terms of sharing time and space."

For Wilde, one of those jobs is making her directorial film debut with the movie Booksmart, a comedy about two best friends who embark on a night of fun after realizing that they spent their high school careers working too hard, set to hit theaters in 2019.

The fact of the matter is as you get older, you realize you cannot prepare for what life throws at you, and that is what unifies us.

And, because directing a film is an intense, arduous process, Wilde says that she's fortunate to have Sudeikis pick up where she has to leave off when work responsibilities arise.

"Right now, I’m directing a movie and finishing the edits, so Jason has been incredibly supportive and generous with his time while I’ve been really in the thick of it," Wilde says, but notes that when the roles are flipped, she gladly takes over. "And then, you know, he will jump into a project and I will be just as supportive. So, you have to kind of find that balance. It’s never easy, but I think it’s just communication and you have to be really clear on what matters to you, and you have to be as willing to give as you are to take, always."

As for a partnership of an entirely different kind, Wilde has teamed up with Dunkin' Donuts Coffee at Home to help create and design the world's first-ever tiny home powered by recycled coffee grounds. Aptly named the Home That Runs on Dunkin', this New York City tiny home's interior design was thought up by Wilde, and her inspiration, she tells me, was Dunkin's classic logo colors.

"It was all inspired in terms of the colors of Dunkin' itself: pink, orange and red, which are all colors that I really love — and love together," she says, adding that she enjoyed using both handmade and sustainably made materials to make it "feel like a home, as opposed to a trailer."

And if you check out the home itself, you'll see that Wilde absolutely nailed it, blending the pops of color perfectly with sweet and personable details.

"I really love this concept of a tiny home that would actually be powered by a biofuel created by coffee grinds," Wilde says, and honestly, the science behind the tiny home is pretty impressive. Using a biofuel blend containing 80 percent coffee oil — 65,000 pounds of it — extracted from spent coffee grounds, the tiny home is able to be fully powered, and even has luxurious amenities like a jacuzzi tub, washer and dryer, and high-end kitchen appliances.

Wilde notes that she was honored to partner with Dunkin' on this project not only because she enjoys their product, but because of the conversation that the tiny home allows her to speak openly about the environment.

"The innovative approach to this home is creating an alternative fuel, and that’s exactly what we need to be talking about," Wilde says. "There’s a recent report about climate change that says we have about 10 years before irrevocable effects that our children — and their children, and theirs — will suffer from. This is the time to really prioritize that conversation, and I give Dunkin’ so much credit for incorporating that into their marketing, and I really love that they wanted to create this biofuel."

"It's never been done before," Wilde adds. "And that little home, which was so beautifully designed by the architects who created it, is running on 65,000 pounds of ground coffee. And I think that’s so fascinating. I’m excited about the whole thing."

No matter what side of the earth you live on, you’re going to experience incredible joy and pain, and if we recognized that kinship, we would probably behave differently, and maybe it would help us all feel closer in this experience of living.

Switching gears from Wilde's passion about the environment to her passion about her job, I brought up one of her most recent films, Life Itself, and the fact that it's received some backlash about having a plot filled with several twists and tragedies (too many for some critics' taste). But Wilde's takeaway from the film was much, much different, and she revealed that she wanted to be a part of a story that felt raw, real, and — most importantly — human.

"I think that, unfortunately, life is full of tragedy," she says. "Life does change suddenly and can reach from incredible bliss to devastating tragedy — that’s part of being human, and that’s part of what’s so difficult about being human." Her words are poignant, and yet reveal a lot of truth about the way people act and react when it comes to things that don't always make sense.

"We create stories to help ourselves survive. We create a belief structure to contextualize that experience," she reveals. She continues, telling me, "The fact of the matter is as you get older, you realize you cannot prepare for what life throws at you, and that is what unifies us. That sense of vulnerability is what connects all of us, and I think that’s what the movie’s about. It’s about no matter what side of the earth you live on, you’re going to experience incredible joy and pain, and if we recognized that kinship, we would probably behave differently, and maybe it would help us all feel closer in this experience of living."

I finish my conversation with Olivia Wilde feeling uplifted and hopeful, and it's pretty clear that she's not only a superstar in every sense of the word, but a superwoman, too — and I can't wait to see what kind of incredible feat she performs next.