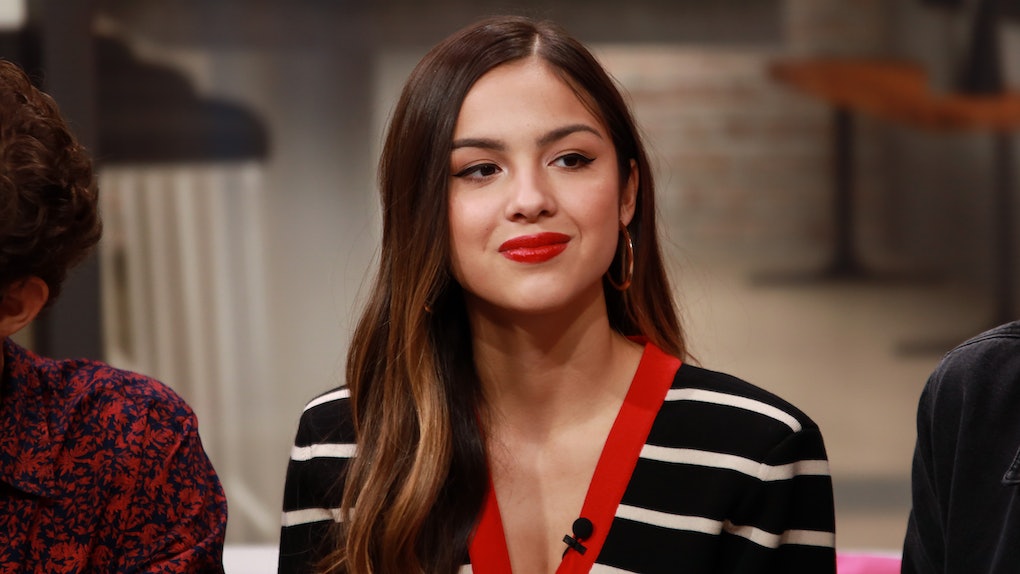 Three months after the release of her debut single "drivers license," Olivia Rodrigo is back with more music magic. Her follow-up single "deja vu," arrived on April 2, and of course fans are already speculating about who the song was written about. If you pay attention to Olivia Rodrigo's "deja vu" lyrics, you might catch a clue.

Rodrigo started teasing the lyrics to "deja vu" several days before releasing the song, partnering with Spotify to do so. "Strawberry ice cream, one spoon for two" one tweet promoting the song read. The next day, a tweet surfaced which teased the lyrics, "let's be honest."

Rodrigo didn't reveal much else about her new song, but she did promise it would be much different from her debut. “I can’t give away too many details, but it’s definitely not like ‘drivers license’ at all, which I’m really excited about,” she said when chatting with MTV on March 29. “I think people are gonna get to see another aspect of my music and my songwriting. I’m super stoked and also really nervous.”

After the hype of "Drivers License," Rodrigo wanted to make sure fans know she had more to offer. “I want people to see more about who I am as a person and get to know me better,” the star admitted. “My next singles are reflective of that and there’s also a lot of aspects of a breakup that aren’t sadness and stuff like that.”

Where "drivers linsense" was Rodrigo's moment to cry about her breakup, "deja vu" is where she gets angry. In it, she calls out her ex for doing all the things he did first with her with his new girlfriend and questions whether the other girl knows it.

Of course, everyone's speculating the song's about Bassett and Carpenter again, but can you blame them considering these pretty pointed lyrics below?

Check out the lyrics to "deja vu" below and decide for yourself.

Being annoying, singing in harmony

I bet she’s braggin' to all her friends

Saying you're so unique (Huh)

So when you’re gonna tell her?

And we did that too, she think it's special

But it's all re-used

That was our place, I found it first

I made the jokes you tell to her

When she's with you

Do you get deja vu when she's with you?

Do you get deja vu, huh?

What do you call her? Almost say my name

'Cause let's be honest, they kinda do sound the same

Another actress, I hate to think that I was your type

And I bet she knows Billy Joel

'Cause she played Uptown Girl

You’re singing it together

Now I bet you even tell her you love her

In between the chorus and the verse

So when you’re gonna tell her?

And we did that too, she think it's special

But it’s all re-used

That was our place, I found it first

I made the jokes you tell to her

When she's with you

Do you get deja vu when she's with you?

Do you get deja vu, huh?

(Yeah, everything is over-used)

Play her piano, but she doesn't know

That I was the one who taught you Billy Joel

A different girl now, but there's nothing new