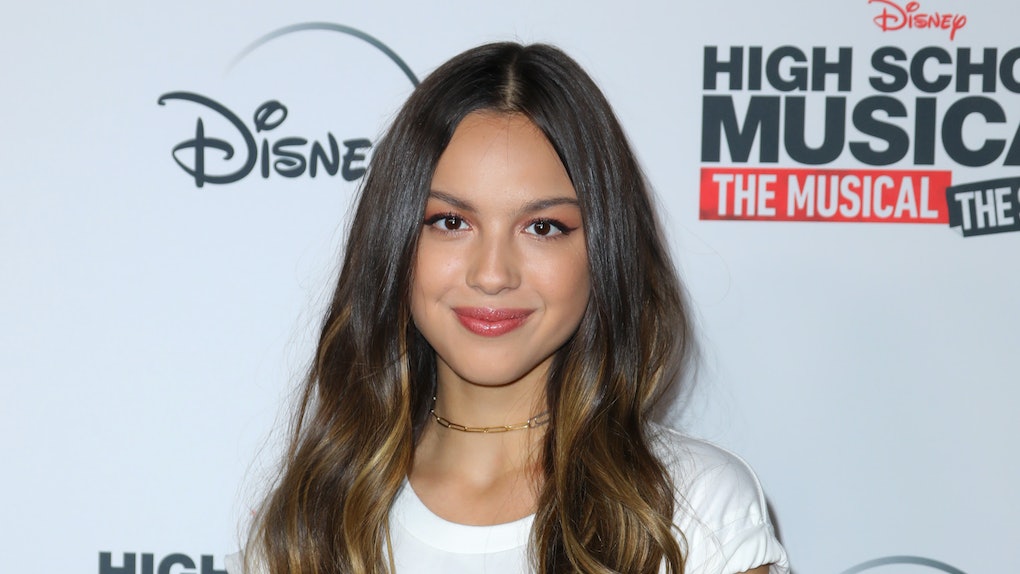 Olivia Rodrigo fans are hardly done blasting "drivers license" non-stop, but they're going to have to make room for another new song on their playlist. The singer's second single, "deja vu," is here, and it's already capturing fans' hearts. Like her debut release, the song has some pretty ~deep~ lyrics, and fans are wondering if Olivia Rodrigo's "deja vu" is about Joshua Bassett and Sabrina Carpenter, who are rumored to have inspired her previous track. Here's the deal.

Fans were already invested in the personal aspect of Rodrigo's music, seeing as her last release was highly speculated to be about Joshua Bassett, her rumored ex and current co-star on High School Musical: The Musical: The Series. With so much hype about who her viral track was written about, fans were wondering about "deja vu" before it even hit streaming services.

Rodrigo first teased the song on March 27, sharing a cryptic video on Instagram that featured a melting ice cream cone. She continued to tease the song in the days following, finally announcing the name of her single on March 30. "My new song deja vu is out Thursday at 9am pst. I promise it’s not an April fools joke lol. Presave link in bio," she captioned her post.

Now that it's finally here, fans have a lot of thoughts on who the song might be inspired by, but before I get to that, listen to the track below.

Fans are convinced "deja vu" is about the love triangle Rodrigo sang about in "drivers license," because in the new song, she says her ex is seeing another girl nowadays and they're doing the same things he and Rodrigo used to do while they were together. "So when you’re gonna tell her?/ And we did that too, she think it's special/ But it's all re-used," Rodrigo sings. "Do you get deja vu when she's with you?"

Of course, fans immediately thought of Bassett and Carpenter, who are rumored to be dating. You can't blame them, especially when Rodrigo includes so many references toward Carpenter in the second verse of "deja vu," like when she says her and her ex's new girlfriend's name "kinda do sound the same," and that the new girlfriend is "another actress."

The most telling details of all, however, were when Rodrigo admits her ex is a singer and his girlfriend is as well. "I hate to think that I was your type/ And I bet she knows Billy Joel/ 'Cause she played Uptown Girl/ You’re singing it together/ Now I bet you even tell her you love her In between the chorus and the verse," Rodrigo says.

Fans had so much to say about the lyrics.

Fans clearly love the song and the best part is, they'll be treated to more bops when Rodrigo's debut album arrives on May 21.

More like this
Joshua Bassett Almost Played Harvey In 'Chilling Adventures Of Sabrina' & I'm Shook
By Dylan Kickham
These Tweets About BTS' 'Bang Bang Con 2021' Sum Up The Epic Performance
By Cianna Garrison
With 'Like Water,' Wendy Found Her Biggest Cheerleaders In Her Red Velvet Bandmates
By Michele Mendez
Stay up to date