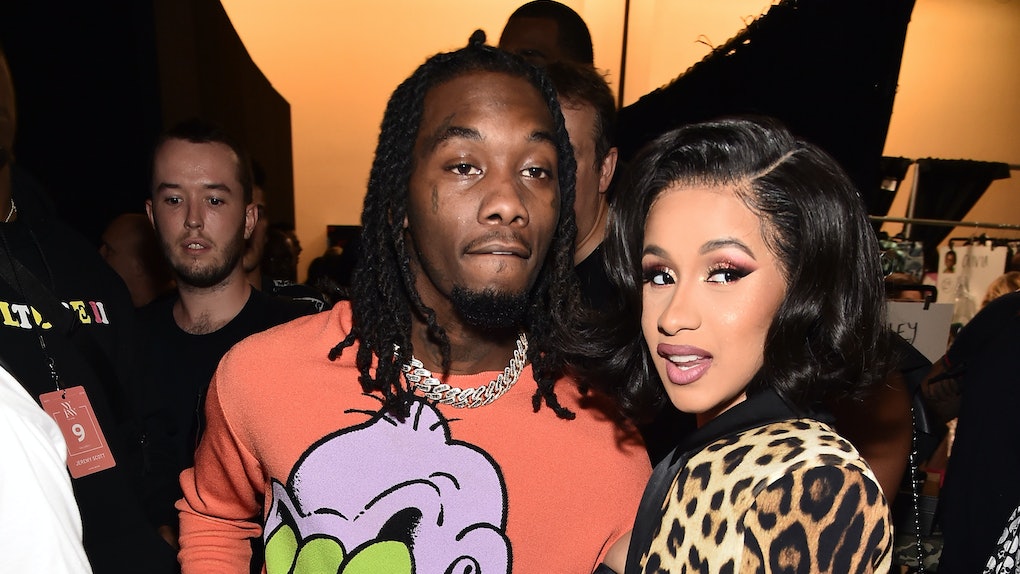 By now, we all know that rapper Cardi B is not on board with President Donald Trump and the government shutdown. After she uploaded a video to social media ranting about Trump, it's pretty clear that she is in no way a fan of the president or his policies. But now, Cardi's ex (maybe?), rapper Offset, is also speaking his mind on the matter, and it's Offset's comments about Trump and the government shutdown that prove that these two are on the same exact page with where they stand politically.

Before getting into Offset's opinion on the matter, let's first take a look at the video of Cardi B talking about Donald Trump and the shutdown, because it's brutally honest and explains how a lot of Americans are feeling about the whole thing.

On Jan. 16, Cardi took to social media to share her thoughts. She said in part,

I just wanna remind you that it's been a little bit over three weeks. Trump is now ordering federal government workers to go back to work without getting paid ... Now, I know a lot of y'all don't care cause y'all don't work for the government, or y'all probably don't even have a job, but this sh*t is really f*cking serious, bro. This sh*t is crazy. Our country is in a hellhole right now. All for a f*cking wall.

The shutdown is now the longest government shutdown in U.S. history, and, in case you somehow missed it, it centers around making Trump's campaign promise of building a wall along the U.S./Mexican border come to fruition.

"We really need to take this serious," Cardi continued. "I feel like we need to take some action. I don't know what type of action, b*tch, because this is not what I do. But b*tch, I'm scared. This is crazy. And I really feel bad for these people that gotta go to f*cking work to not get motherf*cking paid."

Elite Daily reached out to the White House for comment on Cardi B's comments, but did not hear back by the time of publication.

We know exactly where Cardi stands, but what about Offset?

While the Migos rapper typically keeps quiet when it comes to politics, his interview with Esquire magazine that was published on Tuesday, Jan. 22, reveals his political views, and they bare a striking similarity to his estranged wife's.

"We're going through a f*cked up time," he told the publication. "Both sides. Black and the white. You know why? The government shutdown. Black people aren’t working, white folks aren’t working. It’s everybody. This ain’t supposed to be going down. Not in America," he said.

Offset continued, explaining, "We got our chest out, we got the money, we got the cars, we got the celebrities, we got the stars, everybody wants to be like us. All these other countries when I go there, they’re inspired by us."

"Seeing people talk about how they can’t pay their bills but they have to work. That’s some slave sh*t," Offset continued. "I don’t really get into it politics because I’m usually on the other side of it. There’s black mothers with jobs, and now you take their jobs away."

While Trump has ordered some government workers to go back to work despite the government shutdown, those workers aren't being paid for their labor during this time period.

Offset also called out Trump for the inequality of wealth in America, noting the fact that Trump, a billionaire, is our president.

"And then the president, I don’t really want to speak on him but he’s rich," Offset said. "Make a n**** respect you, because a n**** don’t respect you. He’s rich and has these folks struggling."

Elite Daily reached out to the White House for comment on Offset's comments, but did not hear back by the time of publication.

It looks like both Cardi B and Offset have no problem speaking their mind about the current political climate. Hopefully, the more the word is spread, the sooner the shutdown will end. Crossing my fingers for America, and for the workers who are going in and doing their jobs with no real end to the shutdown in sight.