Stop the press. Shut the front door. Drop everything. There is a rumor swirling around the stratosphere that there might be an 'NSYNC reunion at the Super Bowl this year and it's far too much for me to process. Will they sing "Space Cowboy"? Will JC do a super long and slightly off-key riff? WHAT THE "H" "E" DOUBLE HOCKEY STICKS IS UP WITH CHRIS?! So many questions. So much time to hypothesize.

The rumor mill began swirling when Joey Fatone (of course it was Joey) spoke with TMZ Sports in an airport (because that sounds like a match made in someone else's heaven). He said that if the stars aligned and if Timberlake signed on for the halftime show and if he asked his old bandmates, then maybe the boy band of our generation (but also the boy band of all time) would get back together for one or two fist-pump-pivot turns.

Quick important detail: Neither the NFL nor Justin Timberlake and his team have confirmed anything, so we could just chalk this up to Fatone getting liberal with his hopes and dreams and the press... but we can't blame him for tossing it out there.

While strolling through what looks like a Delta airlines self check-in station, Fatone told TMZ,

We've done Super Bowl before... you know what, it's one of those things. Just like we did the MTV awards... You know, if someone asks to do it, if it's right, then we do it. If everybody can't do it, then we don't do it. It's pretty simple.

Fatone also joked with the camera, "Hope there's no nip slip this time." 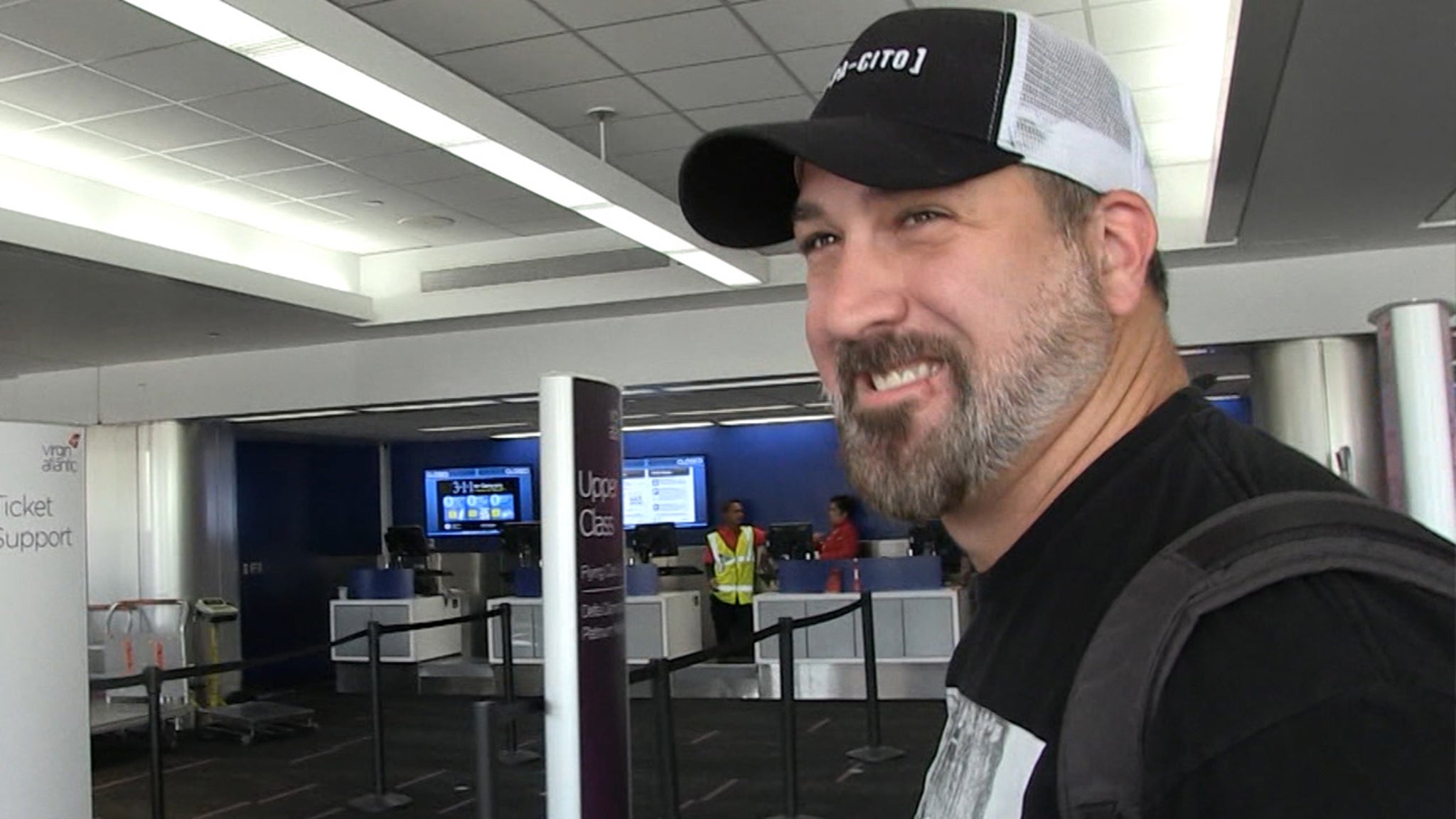 Of course, the previous band reunion Fatone is talking about is the epic two-minute performance 'NSYNC snuck in as part of JT's 2013 Music Video Awards extravaganza. To this day, it is my personal favorite performance of all time. In fact, I vividly remember tweeting something to the effect of, "We thought Beyoncé was the answer, but it's been Justin this whole time."

FIGHTING WORDS, I KNOW. But that's how strongly I felt.

I've since searched the depths of the internet to find a free, high-quality video of JT's performance in its totality, and it just doesn't exist. Fortunately, I can give you this... 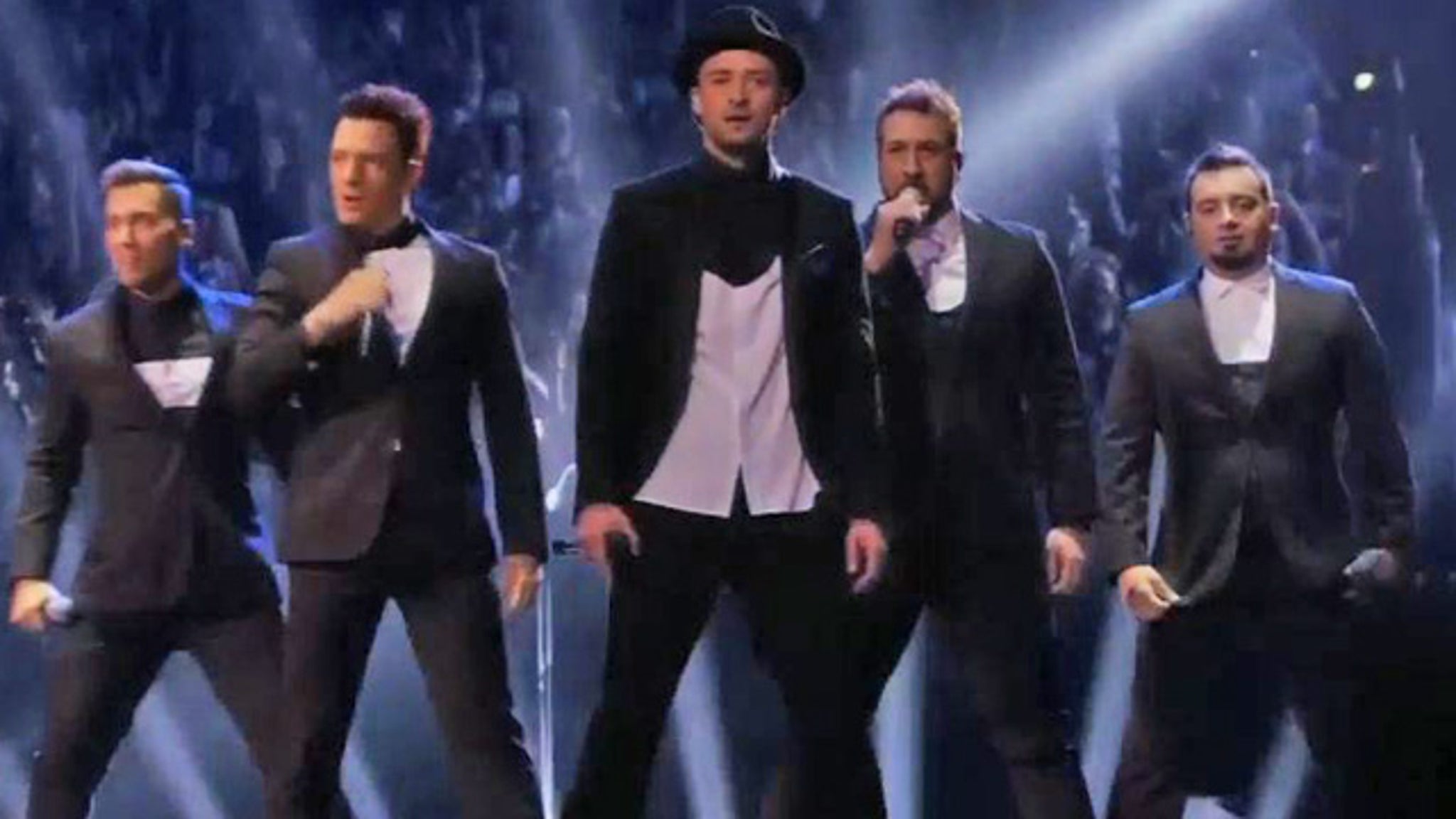 (JC just couldn't help himself at the end there, could he? Listen, if the man's got a microphone, the man will riff.)

What you don't catch in this video is the glorious moment when all the other members subtly disappear into their stage trapdoors, but Chris gets stuck. He ends up having to crawl down Joey's hole.

It's a very special moment to me.

As for Timberlake headlining the big game, Us Weekly reports JT is "finalizing his deal." Other reports hinted that he might step on stage with the one and only JAY-Z, but an insider says, "as of right now, it will just be Justin — no surprise performers."

There is also a touch of lingering controversy left over from nipple gate with Janet Jackson. Ever since, a five-second broadcast delay has been implemented as issued by the Federal Communications Commission. After all, the Super Bowl is supposed to be a family-friendly affair and not just for grown men shouting obscenities at their televisions. Hey... wait a minute...

Dear lord, just give me "Space Cowboy" and I promise I'll never ask for anything again except exclusive insider details on what Justin smells like. That's it.