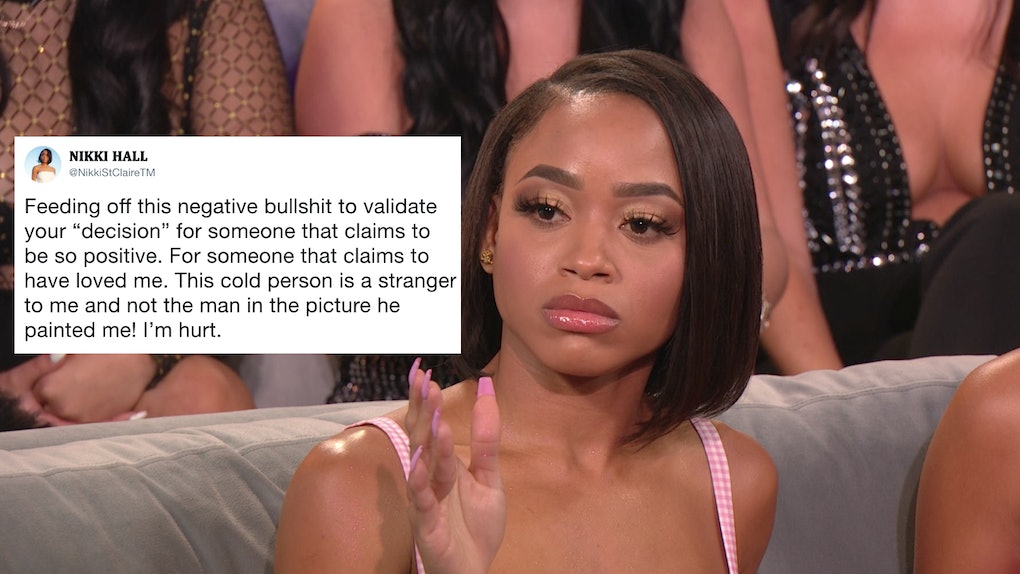 The finale episode of Double Shot at Love with DJ Pauly D and Vinny ended on a pretty uncomfortable note, as Pauly D surprised everyone by choosing nobody. The awkward moment then led to an intense reunion show, where the supposed winner Nikki confronted Pauly over his dismissal of her. And in case that all was not enough drama for you, Nikki's tweets about Pauly D after Double Shot at Love are even more fiery than the reunion.

From the very start of Double Shot at Love, Nikki Hall seemed to have the competition for Pauly D's heart on lock. The two formed an instant connection on day one, and even though Nikki became the center of a lot of fights in the house, she always remained the closest with Pauly out of all the other women. Although Nikki stood out as the clear frontrunner, Pauly also admitted that he was growing scared that she may be too intensely committed to him. When Nikki had to take a lie detector test, she admitted that she loved Pauly and would agree to marry him after only knowing him for a few weeks, which visibly freaked Pauly out a bit.

In the end, Pauly opted to send both of his final two girls home, cutting Derynn first and then blindsiding Nikki after she believed that she had won. Obviously, Nikki was not pleased with the decision. She sat stone-faced through the reunion, making her feeling towards Pauly very clear, and vented a lot about the process on Twitter. Pauly even admitted in the reunion that he blocked Nikki on social media, saying that reading all her posts about him was too much. Check out some of her tweets about Pauly D below:

And Nikki did not stop at just posting tweets about her situation with Pauly D, she also exposed some screenshots of text messages between her and Pauly. In the screenshots, which can be viewed on Yahoo! Entertainment, viewers can see a totally different side of Pauly D than they saw on Double Shot at Love. Pauly seems completely devoted to Nikki, writing that he loved every part of her and even going so far as to show off his jealous side if she dates another man. In her since-deleted post, Nikki wrote that it was ridiculous for her relationship with Pauly to be painted as one-sided. Pauly's team declined to comment on the texts.

Nikki is certainly not alone in expressing her disappointment in how Double Shot at Love ended. The woman that Vinny chose in the end, Alysse, confirmed that her relationship with Vinny was over at the reunion, claiming that he stopped texting her during the months following the show's wrap. Like Nikki, Alysse took to Twitter to vent about her feelings on Vinny even more. Check out Alysse's fieriest tweets below:

Even though Double Shot at Love has ended, it is clear that the drama is only just reaching a boiling point on social media.

More like this
These Tweets About Regé-Jean Page Leaving 'Bridgerton' Are Royal Bummers
By Cianna Garrison
This 'Drag Race' Season 13, Episode 14 Clip Shows The Top 4 Getting SO Real
By Lexi Williams
'The Circle' Season 2 Cast's Instagrams Show Off Their IRL Social Media Skills
By Abby Monteil
Stay up to date