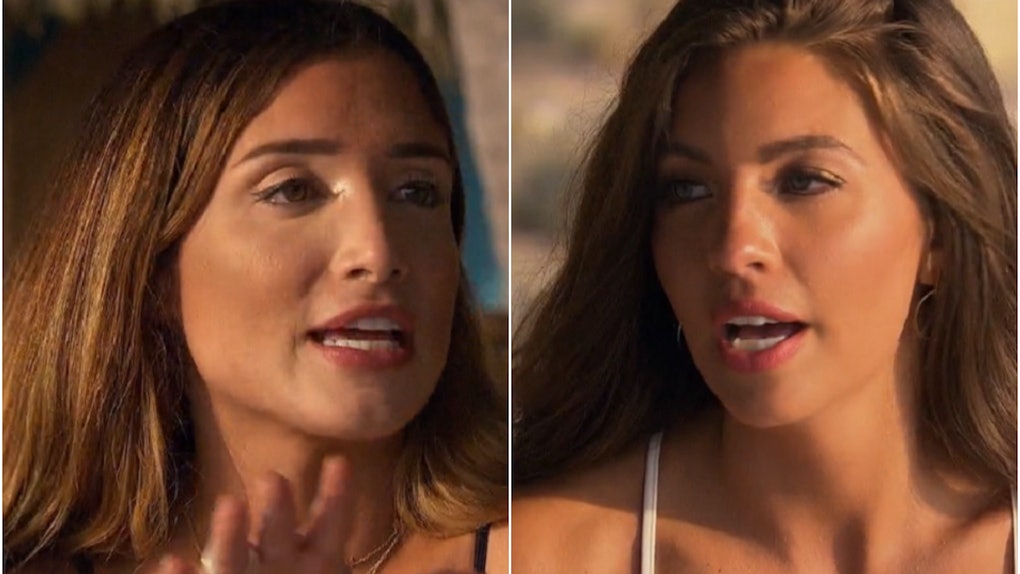 Nicole's Tweet About Angela On 'Bachelor In Paradise' Is Super Apologetic

Having to meet your partner's ex is inevitably awkward, but suddenly having to live on a beach with her and your guy is a whole other story. Such was the case for Bachelor in Paradise's Nicole Lopez-Alvar when Clay Harbor's ex Angela Amezcua arrived as a contestant. Uncomfortable with the situation, Nicole made some negative comments about Angela and her weight on the show.Now, following her remarks airing in the Sept. 2 episode, Nicole's tweet about Angela on Bachelor in Paradise has a far more apologetic tone.

First seeing Angela when the Season 6 cast attended the wedding of Paradise alums Chris Randone and Krystal Nielson, Nicole watched as Clay spiraled over reuniting with his ex. As Angela's friend and Paradise contestant Annaliese Puccini implied earlier this season, Clay apparently called off his relationship with Angela soon after they began serious discussions of their future. Despite believing she and Clay grew stronger during the ceremony, Nicole became worried when Clay was invited to the reception without her, fearing he and Angela could reconnect.

The love triangle grew even more tense when Angela arrived on the beach as a contestant. Although she said she wanted nothing to do with her ex, Angela's arrival prompted Nicole to calm Clay ahead of speaking to her. "Just be strong; just be confident,” she told him. “Get your head in the game. You’re stronger, she’s weak. Literally, she’s like one pound. She has no body mass.”

Many fans interpreted the comment as Nicole body-shaming Angela, and after watching the moment as it aired, Nicole seemed to recognize her mistakes. "Omg Nicole is canceled," she tweeted before writing a full post about the blunder.

"My comments to Clay were in confidence to make him laugh and feel better," she wrote, adding: "However, Angela is a beautiful person, inside and out. Furthermore, f me for those body comments. We all deserve love."

The apology garnered plenty of support, including a tweet from fellow Paradise contestant Demi Burnett. "We stan self-awareness," she wrote in reply to Nicole's apology tweet.

Just like in real life, people in the Bachelor franchise aren't always thinking clearly when they are in the heat of the moment, and sometimes it takes time (plus watching the moment replayed on national TV) to recognize where they went wrong. Nicole also made a valid point about being such a visible member of today's dating world, tweeting, "We are all the product of dating in the 21st century. It’s a nightmare. That’s the tweet and the tea. Good night amigos and haters."

Ultimately, Angela asked out Mike Johnson on a Paradise date after reassuring Nicole that she had no interest in Clay. Although Angela remarked she had as much right to be there as Clay did, it seemed Nicole may have had nothing to fear when it came to the former couple possibly rekindling their bond. Fans will have to wait and see if this proves true.

Season 6 of Bachelor in Paradise continues at 8 p.m. ET on Tuesday, Sept. 3, on ABC.