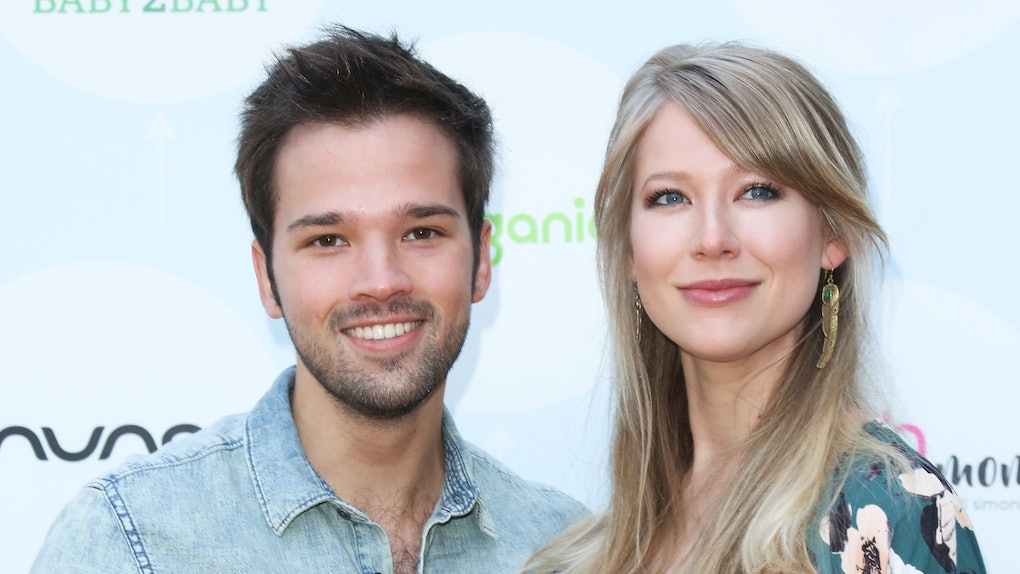 Sorry, Seddie and Creddie shippers, but iCarly's resident "tech stooge" Freddie Benson only has eyes for one woman. Nathan Kress and London Elise Kress' relationship timeline is truly cute AF, and over the past six years, they've been through a lot together. From their whirlwind engagement to health struggles to multiple miscarriages, Nathan and London are now due to welcome their second daughter any day now, and I couldn't be happier for them. However, it seems like some iCarly fans weren't too happy about their fairytale romance — at least, not initially.

"Sometimes people have a little bit of trouble separating reality from a television show," Nathan explained MTV News back in December 2015, noting that — after his November 2015 wedding with London — both their Instagrams were flooding with negative comments. "Honestly, the only things that kind of bother me are more the people who will go on London's stuff and say, 'I hate you, you're horrible because Freddie's supposed to be with Sam,'" Nathan added. (For the record, Nathan also revealed he's #TeamCreddie himself.)

In honor of Nathan and London's expanding family (and the highly-anticipated Paramount+ iCarly revival), here's their sweet relationship timeline from the very beginning.

They Started Dating In February 2015

A few weeks later, London posted a collage in honor of their one-month anniversary. "Where the heckkk did that first month go?!? I really have no idea....but here's to many more ♡," she wrote.

In May 2015, Nathan took to Instagram to announce that — after just four months of dating — he proposed to his girlfriend during a picnic in Los Angeles. "She said 'Heck yes,'" he captioned a pic from the special moment, while London captioned her own picture, "I said 'Heck yes.'"

They Got Married In November 2015

Six months after popping the question, Nathan and London got married in November 2015. The wedding took place at the Villa del Sol d'Oro in Sierra Madre, California, and Nathan's iCarly co-stars Miranda Cosgrove, Jerry Trainor, and Jennette McCurdy were all in attendance. (Peep their car selfie on the way to the wedding and their cute photo booth pics.) "Hands down, best day of my life. And so begins the adventure," Nathan tweeted following the wedding.

They Welcomed Their Daughter In December 2017

A month later, Nathan revealed they were having a girl, and in December 2017, they welcomed their daughter, Rosie Carolyn Kress. "Mom and baby are doing amazing," Nathan wrote on Instagram in a post announcing her birth. "I am an emotional wreck. In the good way!"

They Announced They're Expecting Again In October 2020

Just about two years after welcoming Rosie, the couple announced they are expecting baby number two in October 2020. Nathan shared the news in an emotional Instagram post. "Absolutely thrilled to announce that Baby Girl #2 is well on the way!!" he wrote. "After multiple previous miscarriages, we can thankfully report that mom and baby are doing perfectly so far. Yet another reason to be excited for 2021!!!"

Nathan first revealed his wife's endometriosis diagnosis in September 2016, but he opened up more about her struggles during a February 2021 interview with filmmaker Justin Baldoni. "It's really rough and there's no cure," he said. "You can have surgery, you can do certain things for it, but there's really nothing to be done." London also wrote a lengthy post detailing her experiences with endometriosis in March 2017, but luckily, it seems like everything is going well with her current pregnancy.

You better believe I'll be standing by for updates on Baby Girl Kress #2.