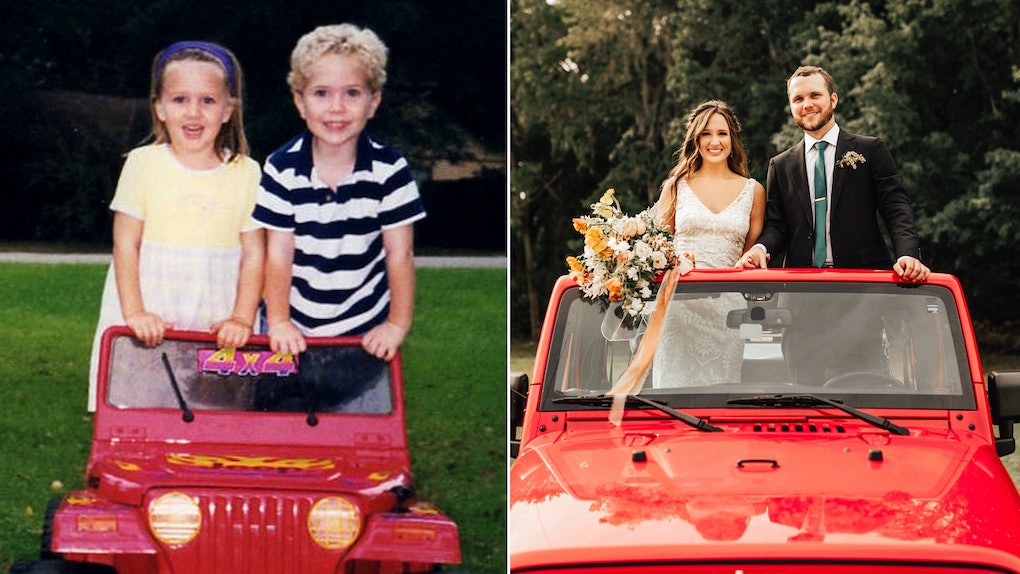 There's nothing sweeter than a love story that takes twists and turns over time, and Natalie Crowe Tatman and Austin Tatman's wedding photo celebrates their unique journey. Natalie and Austin, now 24, were inseparable best friends from the ages of 2 to 5 while attending preschool in Ocala, Florida. They lost touch when Natalie's parents got divorced and she moved to Connecticut, but they reconnected in high school and got married seven years later, this past April. At their wedding, in order to honor their history together, the couple recreated one of their childhood photos together in a red Jeep.

Natalie and Austin tell People that their connection stretches back to birth: both were due on Valentine's Day, though Austin arrived two weeks early and she was born two weeks late. After Natalie moved, she would often think about her preschool best friend, but didn't have a way to get in touch with him. It wasn't until July 17, 2012, when she discovered Austin's name listed in her mom's address book, that she was inspired to find him on Facebook. Though they had no mutual friends, she recognized him instantly, he accepted her friend request, and they began chatting. He still lived in Florida, and she already had plans to visit her dad there later that month.

On July 31, 2012, Natalie and Austin organized for their families to reunite over dinner. “Ever since that time, we’ve been together. It was like the second I saw him, it was a friendship that had come back to life instantly,” Natalie told People.

By the second date, the former best friends knew their chemistry was something special. “We both knew we were in love with each other after being on our second date,” Natalie said. “We rekindled the friendship on the first day of reuniting and then being alone, it was like, ‘OK, whatever time that may be, I’m gonna marry you.'"

They dated long-distance for a year while finishing high school, then attended separate colleges in Florida. The year after graduation, Austin proposed in front of their family and friends in August 2017, and they got married in New Smyrna Beach, Florida on April 13, 2019.

In addition to recreating their sweet Jeep photo, the couple also hung Polaroids from their childhood around the wedding venue and used an address book as a guestbook. “The Jeep was our favorite thing about the wedding,” Natalie noted. “It was a perfect recreation of it.”

While the nods to their past were an integral part of their wedding, there's so much more to the newlyweds' relationship. “As amazing as our story is, I didn’t want it to be the focal point of us being together," Natalie told People. "We have this amazing story but the story isn’t what kept us together for seven years since we’ve reconnected.”

Now, the Tatman family lives with their dog in Fort Lauderdale, where Natalie works as an event planner and blogger and Austin works in sales. These two preschool sweethearts look forward to a lifetime together.