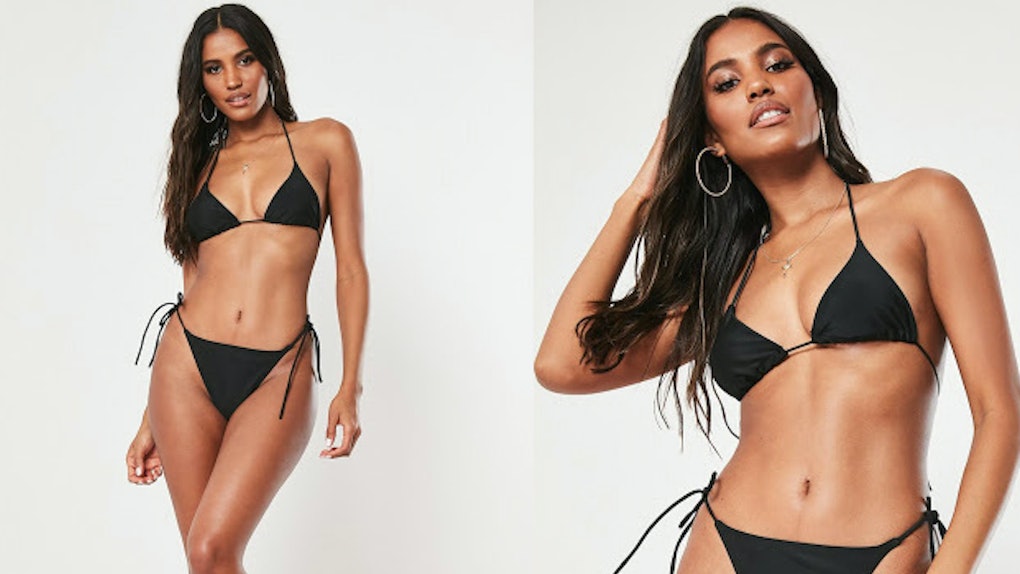 It's no secret that fast fashion is less than good for the Earth. Between the industry's regular use of toxic dyes and non-biodegradable polyester, as well as its low sale prices that encourage consumers to buy, buy, buy, its environmental impact is serious. So when news of Missguided's under-$2 bikini broke in mid-June, some people were understandably critical. A bikini? For just over $1?!

As reported by Dazed, this is actually the second time that the retailer has released its £1 bikini, which was available exclusively on their UK site. As with the first drop, it sold out in a flash this time around. Missguided posted a Tweet to announce the bikini's return, writing, "IT'S BACK @brown.ellie in the £1 bikini set everyone will notice (but your bank account won’t) Shop the 'one pound bikini' in sizes 4 -24 on site but be quick babe, there's limited stock." Featuring a classic triangle top and string bikini bottoms, the swimsuit looks like a typical offering from the retailer, and if I didn't know better, would likely be something I'd consider adding to my closet. Who doesn't love a classic back bikini, am I right?

Thankfully, people took notice of some major issues. Despite the fact that the bikini sold out in a flash, people came out in droves to react to the product and bring up concerns as to why a bikini so cheap should raise some red flags. First up, customers brought up the fact that the set is made of 85% polyester. Not only is the material not biodegradable, but it also requires a water-thirsty production process and is colored with toxic dyes, according to sustainable fashion site, Good On You.

People also brought up worker's rights with the launch of the bikini, with some claiming that a £1 price tag couldn't possibly cover material fees, production cost, and fair wages. As pointed out by Dazed, "Missguided was one of the labels found to be working with UK-based sweatshops, as detailed in a report published last year."

Finally, a bikini so cheap is unlikely to last for very long, perpetuating the culture of over consumption which is incredibly harmful to the Earth.

Following backlash from consumers, Missguided posted a response to the criticism on their website:

We launched the £1 bikini as a promotional item to celebrate 10 years of empowering women to look and feel good without breaking the bank. It cost us more to produce than £1 and we're absorbing the costs so we can offer it at an incredible price as a gift to our customers. There has been no compromise with this bikini - it is sourced to the same high standards as all of our other products.

While it's somewhat encouraging to know that the bikini was supposedly made like every other Missguided product, it doesn't help the fact that the act of releasing it in itself propagated the devaluation of products. Hopefully, this fiasco will encourage consumers to be more conscious about their future purchases.