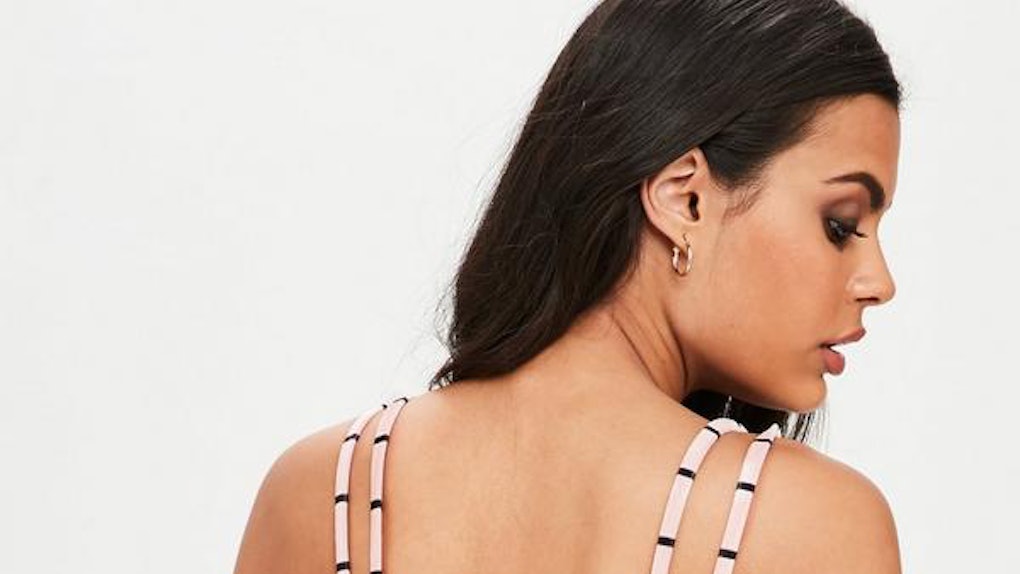 Last week, the women of the world rejoiced when fashion brand Missguided uploaded imagery to their website in which models' stretch marks were on full display. A promising step in the right direction, I thought. But now, in a twisted turn of events, a photographer is claiming that Missguided Photoshopped stretch marks onto their models' bodies, and my hope that the brand was setting the standard in regard to body inclusivity has been crushed.

Over the weekend, photographer Chloe Sheppard accused the brand of digitally altering their photos to actually add stretch marks onto models' bodies. Having previously worked with Missguided on their prom 2017 look book, and shot for respected publications with the likes of Dazed & Confused, i-D and Nylon, Sheppard knows a thing or two about how to spot Photoshopped pictures.

On Saturday, Sheppard uploaded an image of herself in which she proudly shows off her own stretch marks to Instagram, accompanied by an understandably scathing caption. "I suppose this is somewhat a response to *a certain company's* recent tasteless move editing stretch marks on a model, which was clearly a marketing tactic to make their brand seem 'representative' and 'not conforming to normal conventional beauty standards' but actually it's just bullshit," she began.

Sheppard went on to explain that stretch marks are not a trend, and shouldn't be used as such to sell products. Indeed, millions of women, including myself, have to deal with insecurities related to their stretch marks, so if a brand creates fake ones as a marketing strategy, it's pretty insulting. Plus, as Sheppard points out, there are plenty of incredibly beautiful models who actually have stretch marks that Missguided could have used.

"It's quite honestly insulting and does the opposite of what they probably intended. It reiterates the idea that stretch marks/eating junk/thick thighs whatever are OK but only when applied to a skinny girl. I'm just bored of all these companies acting like they give a shit and want to represent everybody when they really don't," she wrote.

After the post went live, The Debrief asked Sheppard to explain how she knew the images had been altered. After all, when the news first broke last week that Missguided had stopped editing their images, I checked out their website right away and was convinced that the pictures were real. While Sheppard does reveal that one of the models in question actually does have stretch marks (her friend showed her a clip of the model doing a swimwear video for Missguided), she remains confident in her conclusion that the photos were altered to make them more apparent.

"Go to their original Instagram post and zoom in on where the stretch marks are, you can see little bumps and white shadowing from where something has been done to that area on Photoshop," she told The Debrief. "The stretch marks are also completely different patterns in the two photos which made me think they were doctored on."

If this is truly the case, it's a huge shame. I can’t tell you how important it is, both on a societal and personal level, for stretch marks and other "imperfections" to truly be celebrated in the media, and not just used as a marketing ploy.

I grew up dancing six days a week and was always super thin until I tore my ACL and had to quit the sport I loved. That was during my senior year of high school, and by the time I finished my first semester of college I had gained 15 pounds (ironically NOT due to alcohol) and found myself marked with squiggles of bright purple stretch marks across my hips and butt. I was horrified. I refused to wear a swimsuit, was embarrassed to tell my friends, and tried every remedy I could Google to get rid of them.

I thought I was one of few girls my age with stretch marks because I never saw them on anyone else. Eventually, they faded into silvery little stripes that I’ve now come to accept — even love! — but I still can’t get over how upset and embarrassed I had been about something that nearly all women have. And yes, that includes models. (Remember when the world seemed to let out a collective gasp last year when Victoria’s Secret released a photo of Jasmine Tookes that showed her stretch marks?)

In response to Sheppard's accusations, Missguided released a statement.

All accusations that we have Photoshopped on stretch marks are entirely untrue. Our aim is to inspire body positivity, so our policy is to not photoshop out what are generally perceived as 'flaws'. Photoshopping them on would negate our message, which is all about celebrating who you are and not striving for unrealistic perfection."

I can only hope this is true. No one's insecurities should be turned against them as a means of getting them to buy things. Rather, they should be normalized (because stretch marks ARE normal) so that girls can grow up loving themselves completely and without exception. As Kendrick Lamar puts it in HUMBLE, "Show me somethin' natural, like a** with some stretch marks."

The internet overwhelmingly agrees that brands should stop editing their photos, but can't seem to decide whether they should praise Missguided for showing stretch marks on their site, or question the brand for the photos' authenticity:

Thankfully, there are other companies out there that definitively aren't airbrushing their models. Earlier this year, it was revealed that ASOS had stopped photoshopping their imagery, while the recently launched Rheya Swim emphasized they won't doctor stretch marks out of photos. These are amazing steps, but in light of this whole debacle involving Missguided, I can't help to wonder if it isn't time we stop praising brands for showing people as they naturally are? That shouldn't earn them the title of being revolutionary or "woke" or inclusive. It should just be reflective of women IRL.

Stretch marks are a part of growing and maturing and developing into yourself; they should be a source of pride rather than shame.