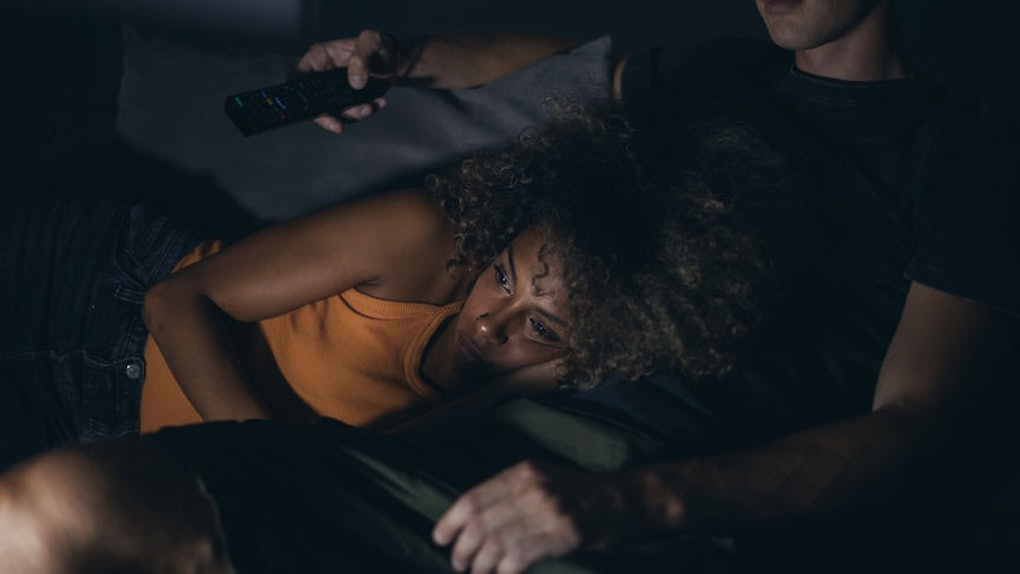 Millennials Are Choosing Marathon-Watching Over Sex, A New Survey Finds

In a world where there are more Netflix originals than anyone could ever keep track of, it's no wonder more and more people choose to stay in rather than go out. But still, there are some activities you might consider always preferable to watching TV. Going to a concert to see your favorite artist, eating out at your favorite restaurant, having sex... right? Well, according to a new survey, it turns out that millennials are choosing marathon-watching over sex, and it's honestly kind of surprising. After all, is Netflix really better than an orgasm?

According to a survey from the Wall Street Journal and Survey Monkey, 1006 adults were asked if they had ever chosen to watch something on Hulu, Netflix, Amazon Prime, or another streaming service over having sex with their partner in the past six months. 26% said they actually had. In fact, one in four of the people surveyed admitted they'd chosen marathon-watching over sex. But, when looking at only the participants ages 18 to 38, that percentage grew to 36% — over one-third of those surveyed. To be fair, most participants said they hadn't chosen streaming something over sex, so it's not like every couple is just re-watching Game of Thrones instead of getting it on.

Looking at the situation closely, it's important to remember that watching a streaming service is highly addictive. “Now, if you’re watching something streaming, the next episode is immediately available, and there are no commercials where you could look over and say, 'Honey, you look cute tonight,'" Dr. Jean Twenge, a psychology professor at San Diego State University and the lead author of the study told TheWall Street Journal. It's easy to fall into the habit of letting "just one more episode" become your entire night.

While it's certain that couples may be too tired to get it on and watching a few episodes of The Office can be more appealing if you don't have enough energy, that doesn't mean no one is having sex anymore. Additionally, it might not be just streaming services that are to blame for a decrease in sexual activity. "There has never been a time you could feel more alone with your partner right next to you," clinical psychologist Dr. Megan Fleming told The Wall Street Journal.

As interesting as this study is, it doesn't mean you should worry about your own sex life. You and your partner don't have to have sex a certain number of times per week to be happy together. "In a long-term relationship, there are no set guidelines, nor should there be, as to how often a couple should be having sex," Erika Ettin, a dating coach, previously told Elite Daily. "Every couple is different and needs different things to satisfy them."

Additionally, as long as neither you nor your partner feel rejected or less important than the next episode of Friends, it's OK to skip the "Chill" part and indulge in the Netflix every now and then. Everyone deserves a quiet, peaceful night in, and if you're tired and would rather watch Vanderpump Rules than get down with your bae, there's nothing to be sorry about.