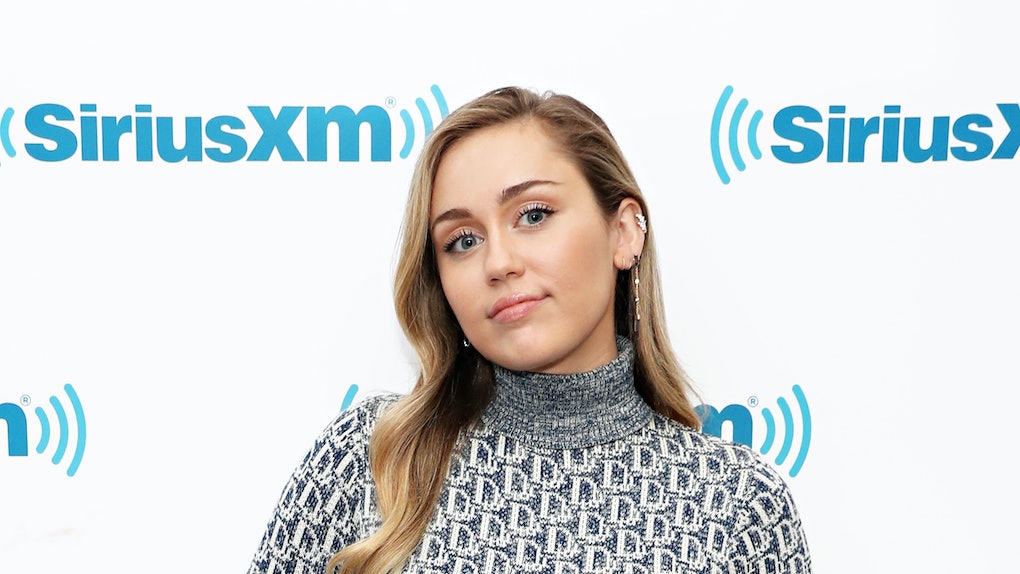 Miley Cyrus is no stranger to the art of tattooing. She's got a handful of tats already, ranging from quirky to beautiful, and I honestly can appreciate them all. But the 26-year-old star recently added another to her collection, and it's definitely, erm, turning heads, because of what it says. Written in script on her left ankle is the word "pussy." So, Miley Cyrus' new foot tattoo really is something else, fam.

The newly married starlet went to her favorite tattoo artist, Bang Bang, and got some new ink added to her body. And, while her new "pussy" tattoo is certainly unique, she's got plenty of other tattoos that are a tad outlandish — you know, things like a slice of watermelon, an alien head, and a jar of Vegemite, which is reportedly meant to honor her now-husband, Liam Hemsworth. I mean, is there even a better way to celebrate Hemsworth's Australian heritage by tattooing the food of his people on her arm? I think not.

So, what inspired her to get this "pussy" tattoo? Is it for her love of cats? Her love of the female form? Did she lose some kind of bet, and was dared to get this as some form of punishment?

I have no idea, but the one thing I do know is that getting the word "pussy" tattooed on your body is so very, very Miley.

In Bang Bang's Instagram Story, it shows Miley Cyrus is all smiles in a black cap, seemingly ready for some new ink:

Then, we see Cyrus laying down, prepping for that sweet, sweet ink to hit her ankle:

Once the tat is complete, we finally saw what she was having tattooed on her body. In elegant script is the word "pussy," and it's kind of cute (???):

OK, so it might seem *slightly* unusual to have that term inked on your body, but this is Miley Cyrus we're talking about. Perhaps there's actually some really deep meaning to the word for her. Or perhaps it means nothing at all.

Whatevs! Let her have fun.

Besides, she already has some deep quotes tattooed on her, like a quote from former President Theodore Roosevelt's 1910 oration speech, which is tattooed on her left forearm back in 2012. It reads, "So that his place shall never be with those cold and timid souls who knew neither victory nor defeat." Later that year, her Liam Hemsworth got a quote from the same speech tattooed onto his body. (FYI: Hemsworth's quote reads, "If he fails, at least fails while doing greatly," and is on his upper left arm.)

A couple who gets tatted together, stays together, amirite?

For anyone who thinks it's silly or pointless to get something like "pussy" tattooed on their body, just remember that it's her body and her choice. It's not hurting anyone!

Let's all just be really happy that she didn't get it somewhere more conspicuous... and let's also be happy that she waited until after she married Liam Hemsworth, because the word "pussy" next to a wedding dress may have turned a few heads. You keep doing you, though, Miley! I support it.

More like this
I Tried Singing While Running Like Miley Cyrus & OMG, My Lungs
By Rachel Varina
Hailey Baldwin's Quotes About Being Rude To Her Waitress Cover A Lot Of Ground
By Brandy Robidoux
Why Did Addison Rae Deactivate Her Twitter? Fans Think This Is The Reason
By Brandy Robidoux
Stay up to date