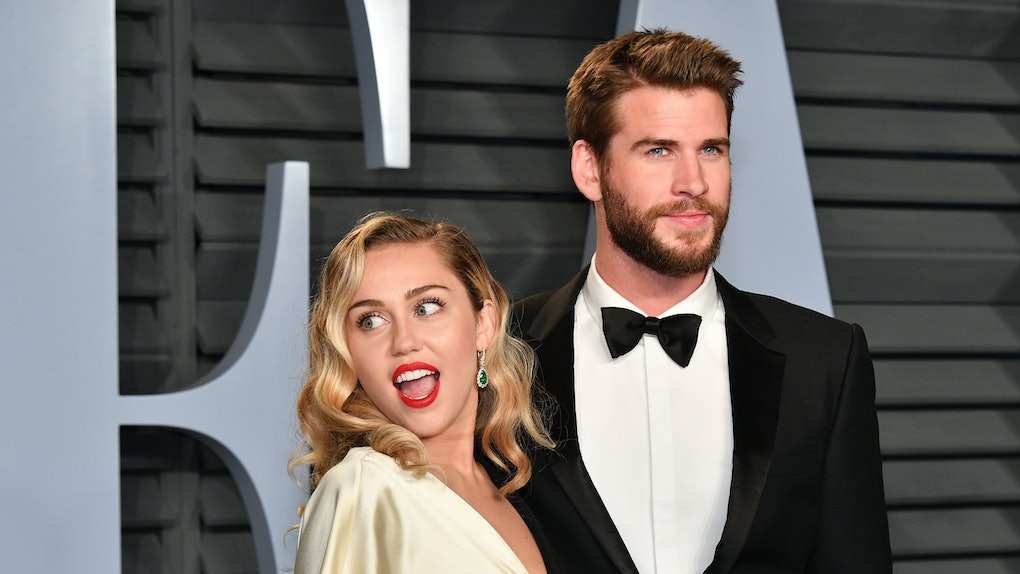 Well, guys. Here we are. Miley Cyrus just confirmed everything you've ever daydreamed or fantasized about Liam Hemsworth is true. Now, somehow, we're all just supposed to carry on as if our lives aren't actually changed forever. The "Nothing Breaks Like A Heart" singer just got very, very personal on social media by confirming her partner has all of the qualities of one meme's description of a "perfect man," and it's equal parts hilarious and overwhelming to take in. Miley Cyrus' comment on this perfect man meme reveals just a handful of the things she loves about her fiancé but certainly answered some outstanding questions fans might have had about their favorite Hemsworth brother.

To be super direct, the meme shared by the popular account @SourPyscho said this: "No man has all five: good d*ck game, empathy, a height above 5'9", no hoes, common sense." Well, well, well. Cyrus begs to differ.

We all know Miley's always just being Miley, which must be what inspired her to comment on the objectively stupid meme. She wrote, "Mine does! Don't give up!" (Actually, actress Lili Reinhart wanted to set the record straight, too, by also commenting, "I found one!" with the raised hand emoji.)

Across the country, Hemsworth admirers (and Cole Sprouse admirers for that matter) sighed, "I knew it!"

A few days prior to her comment, Cyrus spoke with Howard Stern about her relationship with Hemsworth at length where she revealed she prefers to call him her "survival partner" instead of "boyfriend" or "fiancé." Cyrus said this title makes the most sense particularly since her and Hemsworth's home burnt down in the horrific Woolsey Fire. "He thinks it's not romantic, but I learned that it is. It is why you pair up with someone is for survival," Cyrus said.

According to her, Hemsworth jumped into action getting their many animals to safety during the natural disaster. "I've never loved him more for this... He was so incredible. He got all the animals out in his truck. He put two pigs in crates, which I tell you is so hard." She cheekily added, "He got a lot of action for saving the animals."

In the aftermath of the fire, Hemsworth shared this shocking photo of his and Cyrus' demolished home where only a few giant letters spelling out the word "LOVE" remained.

E! reports Hemsworth and Cyrus ended up donating $500,000 to fire relief efforts. According to their statement, Cyrus and Hemsworth's "community and state are very special to them and they want to give back to the place that has created so many beautiful memories for themselves and others. They are donating $500,000 dollars to The Malibu Foundation through Miley's charity, Happy Hippie in hopes to restore Malibu's magic." Reportedly, the money was "used for those in financial need, emergency relief assistance, community rebuilding, wildfire prevention and climate change resilience."

All joking aside, these two really do seem like perfect survival partners. Liam Hemsworth might not be everyone's "perfect man," but he is to Miley, and that's all that truly matters here.