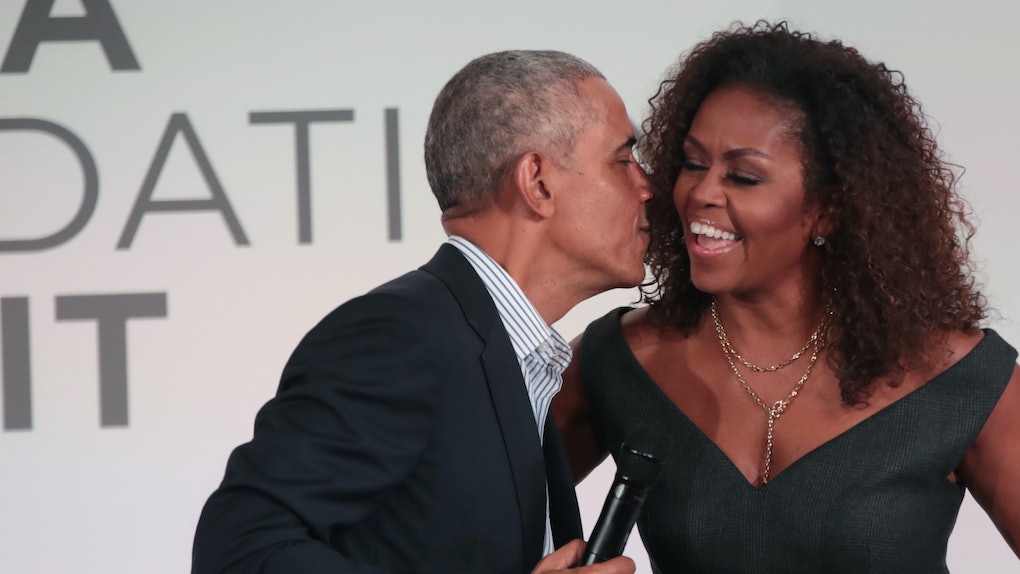 Do you smell the love in the air? It's the most romantic day of the year, and amidst all the chocolate hearts, teddy bears, and sappy cards, there are a few nuggets of True Romance™ out there. Like, Michelle Obama's Instagram for Valentine's Day. You always knew the Obamas were goals, but this takes the cute level up to 11.

Barack and Michelle Obama have always been the poster couple for perfect levels of appropriate PDA, but they're extra sweet when they share the love and show that their romance is about more than just the two of them. For Valentine's Day this year, the former first lady posted an adorable #FBF that showed her love for her husband as both a partner and a father. The snapshot showed a younger Barack along with the couple's two daughters, Malia and Sasha, wrapped up in winter gear and making snow angels in some deep snow (so deep that Sasha, who looks about 5 or 6 years old, kind of gets lost in it). Obama captioned the pic, "Happy Valentine’s Day, my loves. You make even the coldest days feel warm." She paired it with a heart emoji, which is very appropriate because my own heart is melting right now.

The former FLOTUS also posted the pic to Twitter, where fans and supporters weighed in on the adorable throwback.

The photo may be on the older side, but the sentiments clearly haven't changed. Now that Sasha and Malia are both attending college — in their first and third years, respectively — Obama has spoken out about what it's like to be an empty nester.

"Parenting takes up a lot of emotional space," she told Oprah Winfrey on Feb. 8. She said now that her daughters are in college, she has more emotional energy to give to herself. "All that energy I can now place back on me and spending time figuring out my next chapter, how I want to spend the rest of my life," she said. She added that a lot of that goes to her relationship with Barack, too. "Now I can look at him and recognize my husband. He’s still the man I fell in love with."