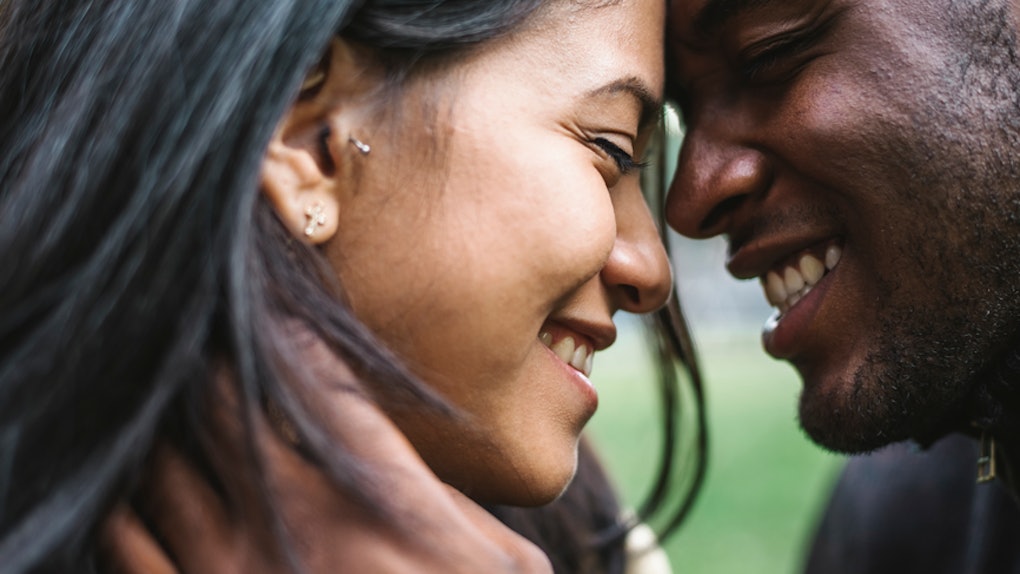 If I had to guess which partner would say, "I love you," first in most heterosexual relationships, I would probably go with the woman. This has absolutely never been the case in any of my own relationships so I have no idea what I'm using as my guide here. Maybe romantic comedies? Anyway, I would be wrong.

Turns out, men are more likely to feel and say those three magic words first. According to a study of 172 college students that appeared in The Journal of Social Psychology, men were more likely than women to drop the L-bomb first. And it turns out that those same students expected the opposite result — that women would say it first.

So not only do men tend to fall in love and express those feelings faster than women do, we're also conditioned to think that women feel and express love sooner in relationships. Personally, I won't say, "I love you," unless it's in response to my partner's admission. It's unfair, I know, but it comes from a fear of rejection. I used to think this was my personal defense mechanism, but thanks to researchers Marissa A. Harrison and Jennifer C. Shortall, I know I'm not alone.

I could have gleaned this from Gossip Girl if I'd been more willing to admit that Blair Waldorf isn't all that different from the average woman. Sure, she has more headbands than I do and oh, yeah, a private limo to drive her around New York City, but for a while, she refused to tell Chuck Bass how she really felt about him unless he 'fessed up first. For her, it was all about power dynamics. She felt that expressing vulnerability would somehow mean losing the upper hand in the relationship.

Eventually, Blair caved and said those three words, eight letters before Chuck could — but most women don't. They're not only thinking about who has the upper hand. Their decision to hold back is more about coming to terms with their own romantic feelings toward their partners rather than their personal insecurities. Here's what else this study revealed about how men and women say, "I love you."

Men fall in love more quickly than women do.

Um, what? Although nine out 10 people assumed that women fall in love before their male partners and seven out of 10 believed that women would be the first to say, "I love you," the survey results revealed the opposite. In fact, men are three times more likely than women to tell their partners they love them, which means Blair was right. Chuck was just playing hard to get.

Men are able to tell if they're in love sooner in the relationship than women are.

OK, now this, I believe. Although it took Chuck longer than Blair to say what he felt out loud, it was pretty obvious to everyone else. He knew he was in love with Blair back when she was dating his best friend Nate and long before she was able to admit her own feelings for him.

While women predict being able to tell if they're in love after a few months of dating, men anticipate knowing this within a few weeks. Romantic, yes, but the reason isn't as pure as you'd think.

Both men and women say they would want to have sex at the same time they know that they are in love and that their partner is in love with them.

Basically, Harrison and Shortall theorize that men's propensity to fall in love sooner might be linked to their desire for sexual intimacy earlier on in the relationship. Although the majority of men and women prefer to wait to have sex until they are sure of their feelings, women need more time to come to a decision.

Whether this hesitation is a natural biological defense (like wanting to choose an appropriate partner to mate with, ew) or a learned, cultural behavior (like waiting on the man to make the first move) is unclear. But the good news here is that women aren't the hopeless romantics they're often written to be in TV shows and movies. They're more cautious when it comes to matters of the heart, more thoughtful, and certainly more logical.

Of course, this study focuses only on male-female relationships, so it would be interesting to look at how same-sex couples toss around the L-bomb. Until then, my advice is, if you love someone, tell them. I promise to work on this if you do, too.