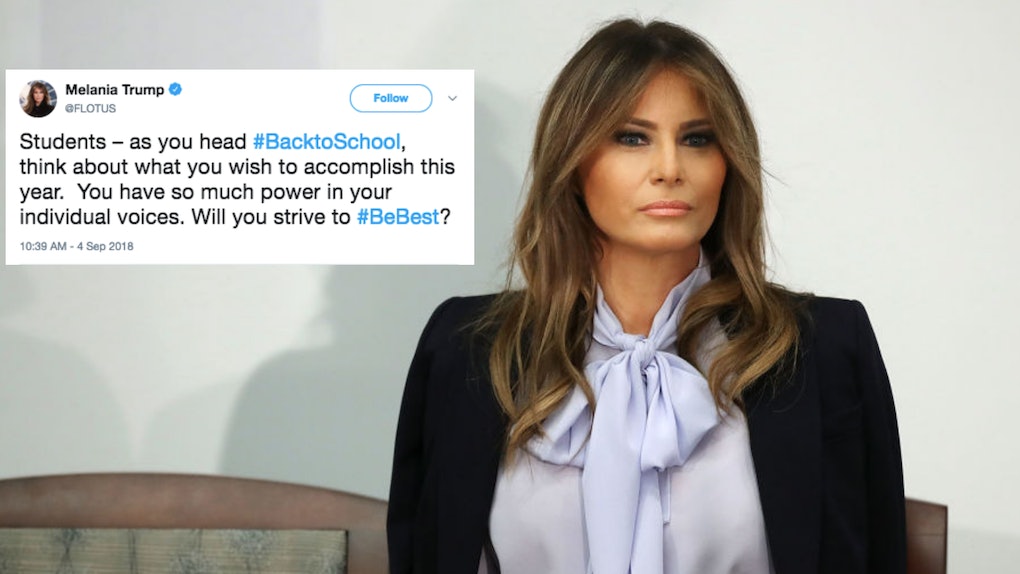 It's back to school for many students across the country. As part of her "Be Best" campaign, the first lady sent off a well-intended message to inspire students as they head into the new school year. But the well wishes did not go over quite like she might have hoped it would. Melania Trump’s "Be Best" tweet for back to school season is getting torn apart by the internet.

On Tuesday, Sept. 4, first lady Melania Trump sent out a tweet aimed at students heading back to school that read, "Students – as you head #BacktoSchool, think about what you wish to accomplish this year. You have so much power in your individual voices. Will you strive to #BeBest?" While many might appreciate the sentiment behind what Trump is trying to propose here, many people found it hard to take her seriously, given the irony involved in her tweet.

Many critics have been calling Trump's "Be Best" campaign kind of paradoxical. The campaign's three pillars focus on the opiate crisis, children's well-being, and, most significantly, teaching and practicing positive social media usage, according to the White House. It's the last one that had a lot of people raising eyebrows, since Trump's husband, President Donald Trump, is known for his frequently bullying or insulting tweets. For example, on Monday, Aug. 20, President Trump sent a tweet denouncing former CIA Director John Brennan as the "worst CIA Director in our country's history." This was in response to President Trump revoking Brennan's security clearance on Aug 15. There was also that time when President Trump tweeted about former White House aide Omarosa Manigault Newman, "When you give a crazed, crying lowlife a break, and give her a job at the White House, I guess it just didn’t work out. Good work by General Kelly for quickly firing that dog!" The vengeful tweet was directed at Manigault Newman, who released alleged audio recordings of her firing by chief of staff John Kelly in the White House Situation Room, according to CNN.

With Trump urging students to be their best, many people couldn't help but think of the ironic discrepancy between what she preaches and what her husband practices.

Donald Trump's tweets weren't the only reason people were calling the first lady's message ironic, though. It is really great Trump is encouraging students to unleash the power of their voices, but some students have already been doing that — to little effect.

For months, student survivors of the Marjory Stoneman Douglas High School shooting that took place in February 2018 have been using the "individual voices" that Trump calls "powerful" to actively call for improved gun control laws, and even organized the March For Our Lives movement to call for stricter gun laws, which include universal background checks, funding for research into gun violence, and banning high-capacity magazines. However, the Trump administration has largely ignored their specific requests, instead advocating for things like arming teachers. In fact, President Trump's education secretary, Betsy DeVos, is reportedly mulling over using federal funds to provide guns for schools, according to The New York Times. A spokesperson for the Department of Education told the paper at the time that the department was "constantly considering and evaluating policy issues."

So basically, people were also not happy about that one.

Maybe "Be Best" is something Trump can bring up with the president. Change starts at home, after all.