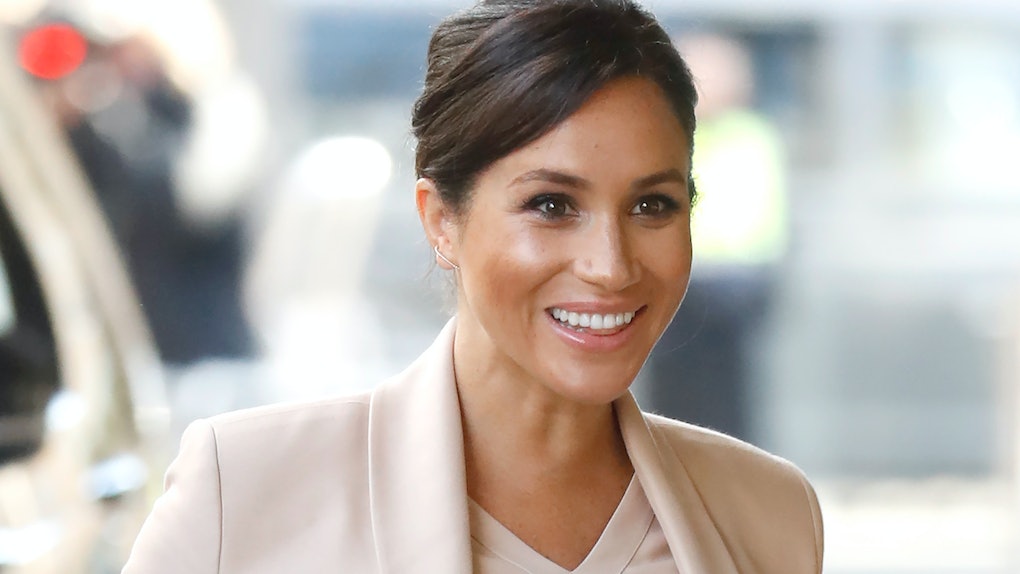 There are a ton of do's and don’ts to pregnancy — do take a multivitamin, don’t drink alcohol, etc. — but where do experts stand on working out with a bun in the oven? Is there a general rule that, after a certain number of weeks, the mother-to-be should lay low, or is it different for every body? Take the Duchess of Sussex, for example. She and Prince Harry always seem to be on-the-go, so clearly her royal highness is getting her steps in, but Meghan Markle reportedly misses doing yoga now that she's pregnant, according to PEOPLE, so is her doctor suggesting she stay off the mat until the baby arrives? Can you not namaslay when you’re expecting? If that’s the case, I feel a little sorry for the mommy-to-be, as I can only imagine how stressful it must be to balance Duchess duties whilst planning for the arrival of your first bundle of joy.

On Friday, Feb. 1, Markle and Prince Harry arrived in Bristol for a visit to the Empire Fighting Chance boxing club for young adults, per the Bristol Post. When the Duke and Duchess arrived in the snowy city, PEOPLE reports that a group had gathered to welcome the royal couple. Markle, being the personable public figure that she is, apparently got to talking with the well-wishers, and struck up a conversation with a fellow yogi. “What kind of yoga do you do?” Markled asked them, commenting on how yoga works “for the mind and body” and how “a nice practice would be so fantastic right now.”

So does this mean Markle is taking a break from yoga until after the baby is born, or was she speaking literally — as in, in that very moment, she could use a yummy vinyasa? I mean, considering the fact that she's a pregnant woman who's constantly on her feet, traveling, giving talks, and meeting people every which way she turns, I wouldn’t blame her one bit if she'd dropped down into child’s pose right then and there.

But listen, I can’t report on what Markle’s OB/GYN thinks about practicing yoga with a little human growing inside her; she hasn’t told me. What I can tell you, though, is that, for the most part, yoga is a relatively safe exercise for pregnant women, according to the American Pregnancy Association. However, the way you approach the mat with precious cargo in your belly ultimately depends on what type of yoga you practice, how far along you are in your practice, and how vigorously you’re moving throughout the sequence.

According to Heidi Kristoffer, creator and producer of Microsoft Bing Fitness Yoga, creator of CrossFlowX, and creator of Revive Yoga, pregnancy isn't always the best time to experiment with new workouts, so if you aren’t a seasoned yogi, it's probably a good idea to stick to gentle flows. “What does [pregnancy] mean for your yoga practice? Not a whole lot if you have a strong, consistent practice,” Kristoffer wrote in an article MindBodyGreen, “but being pregnant is NOT the time to 'go big' with new yoga moves that your body has never known.”

Interestingly enough, back in the fall of 2015, Markle told Best Health Magazine that, in terms of what she does to stay in shape, yoga is “her thing.” Markle’s mother, Doria Ragland, is a yoga instructor, and as a result, the health-conscious Duchess has been practicing since she was a child. “I was very resistant as a kid, but she said, ‘Flower, you will find your practice – just give it time,'" Markle told the glossy. “In college, I started doing it more regularly.”

Knowing this, plus the fact that this is Markle’s first pregnancy, I’m going to go out on a limb here and assume that, if she is putting her practice on pause for the time being, it’s either because she’s approaching physical activity with caution, or her doctor recommended sitting these next few months off the mat for whatever reason.

According to audio-based fitness app Aaptiv’s tips on how to approach yoga when you’re pregnant, after the first trimester, it's not really a good idea to be lying on your stomach, putting too much pressure on your chest, or practicing any deep twists. So, in theory, Markle would be fine to practice a gentle vinyasa here or there, but if she’s more of a hot yoga kind of girl, or she's itching to perfect crow pose, it seems like it's probably a wise move to opt out for now.

It also could very well be that Markle’s just holding off until the couple’s new home in Windsor is completely renovated. Per PEOPLE, the Duchess may apparently be getting her very own, in-house yoga studio, which sounds straight-up awesome.

By the time the baby arrives, Markle might just have her own yogi digs, plus a pair of personalized Everest boxing gloves. So, needless to say, it looks like the Duchess' post-pregnancy workout routine is going to be pretty epic.

More like this
I Tried Singing While Running Like Miley Cyrus & OMG, My Lungs
By Rachel Varina
Here's Why Meghan Markle Reportedly Isn't Attending Prince Philip's Funeral
By Cianna Garrison
These 40 Clever Vaccine Selfie Instagram Captions Deserve A Shot On Your Feed
By Rachel Chapman
Stay up to date