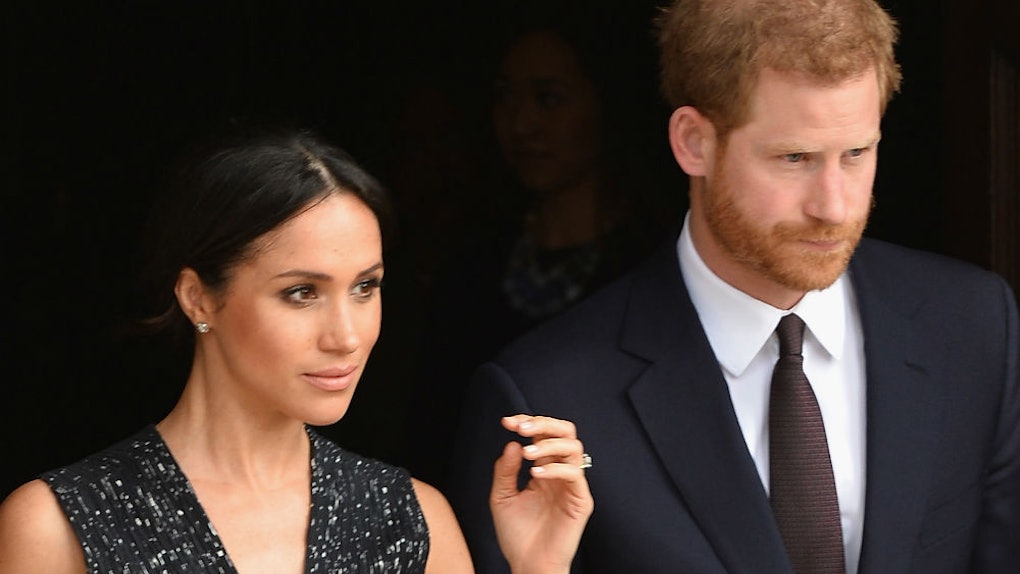 The drama surrounding Meghan Markle, Duchess of Sussex, and her father, Thomas Markle, continues to heighten after a recent interview Markle did with The Sun following his tell-all on-camera interview with Piers Morgan on Good Morning Britain. Both conversations included bizarre commentary on Meghan's relationship with her husband Prince Harry, Duke of Sussex, and her role in the royal family. Meghan Markle and Prince Harry's reported reaction to Thomas Markle's interview is a bummer indeed, but also makes sense given the circumstances. Elite Daily reached out to Kensington Palace for comment on the Duke and Duchess' feelings regarding the interview but did not hear back by the time of publication.

According to Entertainment Tonight, Harry and Meghan are bothered Markle keeps talking to the press about them for financial gain. Prior to the wedding, Meghan was working on bettering her strained relationship with her father when he suddenly appeared in staged paparazzi photos in which he appeared to be googling her and the royal family. According to the Daily Mail, Markle was paid roughly £100k for the setup. At the time, Harry and Meghan showed empathy for his situation, but since then he's apparently continued to use the press to make money off his famous daughter and son-in-law. A royal source told Entertainment Tonight that Harry and Meghan "are frustrated he keeps speaking to the tabloids and taking payment for interviews" and "haven't had any contact" with him as of late.

In his interview with The Sun, Markle said he thinks Meghan is putting on a show and isn't truly happy. He told the publication he feels she is actually "terrified." Elite Daily reached out to Kensington Palace for comment on Markle's claims, but did not hear back by the time of publication.

Also, according to Markle, ever since his on-camera interview with Good Morning Britain, his daughter won't return any of his calls. "Since the [first] interview [with Good Morning Britain], the phone number that I call doesn't work anymore," he said. "The, I guess, liaison with the royal family never answers back, and there's no address I can write to, so I have no way of contacting my daughter."

He claims the reason he's being shunned is due to the money he made on the original staged paparazzi pics, a stunt he eventually told TMZ was not about dollars but rather about bettering his public image. Markle told The Sun,

The reason I am being shunned is because I made a profit on the staged pictures. Anyone who makes a profit off the Royal Family becomes shunned, but I could have made well over $100,000 by just doing a talk show... So if I moved to London and started selling cups with my daughter’s face on, would they shun me? The Royal Family is living by rules that are outdated.

Markle seemingly continues to be utterly clueless to the apparent damage he's causing to his relationship with his daughter by giving paid interviews about their relationship, so it seems there is no clear closure in sight for Markle and his daughter. But the dynamics are still new and changing. Hopefully, Markle will get a clue so that he can work through his issues with the duke and duchess, and they can continue on as one happy family soon!

More like this
Prince Harry's Secret Dates With Meghan Markle At The Supermarket Sound Like A Rom-Com
By Brandy Robidoux
Meghan Markle & Prince Harry's 'Vax Live' Speeches Stole The Show
By Michele Mendez and Abby Monteil
Meghan Markle's 'The Bench' Children's Book Was Inspired By Prince Harry In The Sweetest Way
By Sydney N. Sweeney
Stay up to date