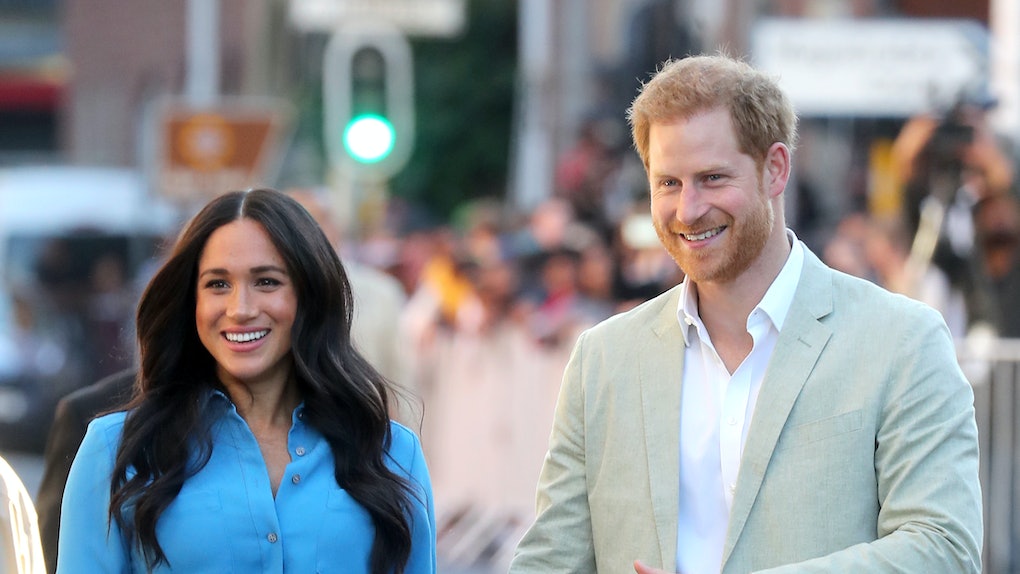 Y'all, I will never get tired of talking about Prince Harry and Meghan Markle. They just seem like two of the coolest and most down-to-earth people ever. If you didn't know, the Duke and Duchess of Sussex and baby Archie have officially begun their royal tour of South Africa and, by the looks of it, they are off to a great start. In fact, the couple's tour is going so well that they're already making headlines for a few different reasons. First, Archie was spotted wearing a similar hat Harry once wore as a baby. (If it turns out it's the same exact one, that would be adorable AF.) The second reason is Prince Harry was caught adorably playing with Meghan's hair. The third reason is Meghan and Harry's royal protocol on tour, which they both apparently want to be casual.

According to Vanity Fair, "The Sussexes want minimal fuss, formality, and protocol, and will instead roll up their sleeves and get to work with projects that mean something to them." Vanity Fair adds, "While security will be watertight, the couple want their engagements to be relaxed, to allow them to connect with the people they are meeting."

Since Meghan and Harry asked for "as little formality as possible" during their time in Africa, they didn't want their arrival to be a huge formal event. Instead, they hoped to get right down to business and start working immediately in order to make a difference.

The royals' agenda includes visiting a women's shelter in Cape Town and viewing a workshop that provides self-defense classes and female empowerment training to young girls. Meghan will also be visiting the charity Mothers 2 Mothers, which trains and employs women with HIV as frontline health workers across eight African nations.

So, you're probably wondering, "how casual do Meghan and Harry want to be treated?" Well, according to Variety, there is no royal protocol that says people will have to bow or curtsy if they get a chance to meet the royals. A source reportedly told Variety, "It’s really up to the individual."

While that may be what goes for the public, the rules for officials are a bit fuzzy. Some officials don't know whether to treat Meghan and Harry formally as usual or not.

“I have no idea how to speak to them. We haven’t received any official brief on etiquette. I think that’s because the Sussexes want to keep it informal. I don’t even know how to greet them," Jacky Poking, secretary of the Bo-Kaap Civic and Ratepayers Association, reportedly told South Africa’s Sunday Times.

Palace aides also reportedly told Vanity Fair that the Duke and Duchess are "happy to be addressed on first-name terms, particularly when they are meeting members of the public."

Fans of the royals know that Meghan and Harry's relationship has been all about breaking tradition. For example, at their wedding, the couple reportedly played some American songs at their wedding rather than entirely British music. The royal couple has also kept baby Archie away from the public eye as much as possible.

Who knows? Since it's only the start of the royal tour, maybe they'll break another tradition in the coming days. Meghan and Harry are honestly the coolest royal couple ever and nobody can change my mind.