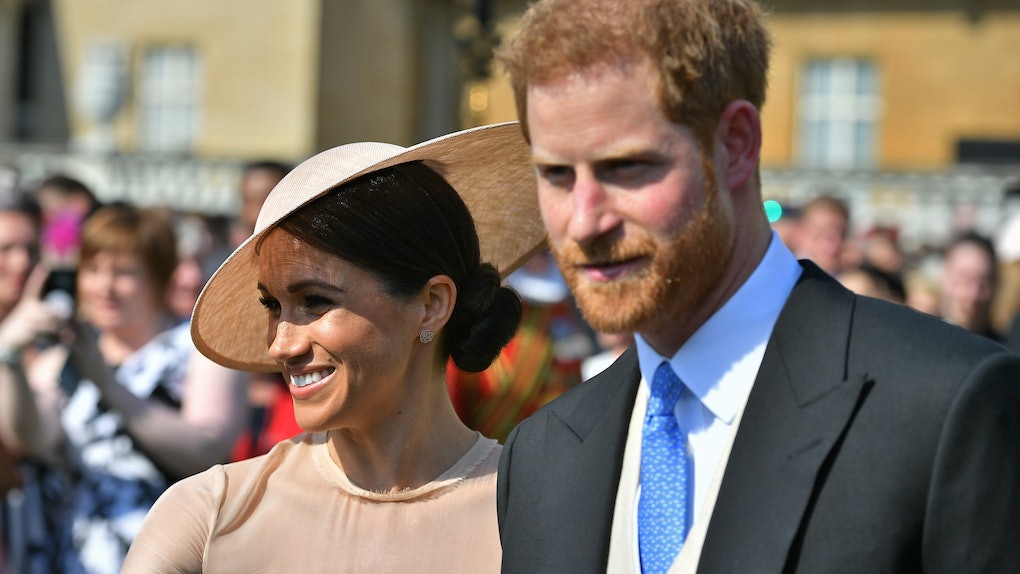 After lots of anticipation, everyone's new favorite couple, Prince Harry and Meghan Markle, finally tied the knot this past weekend and became the Duke and Duchess of Sussex. Since making it official, the couple has wasted no time getting started on their royal duties. Just three days following their wedding, they made their first public appearance as a married couple at Prince Charles' 70th birthday party. And Meghan and Harry's body language at their first royal event speaks volumes about how totally in love and in sync the adorable newlyweds are.

In order to get the scoop on what we could learn from their body language, Elite Daily consulted two body language experts: Traci Brown, author of Persuasion Point: Body Language and Speech for Influence, and Patti Wood, author of SNAP: Making the Most of First Impressions, Body Language, and Charisma.

In general, Brown points out some overarching themes that can be drawn from all of the images. "We see a lot of the same things that we've seen from her," she explains. "She will not take her hand off of him and it can be a little bit for reassuring security and it can be to say, 'Hey, he's my man and don't touch.' We see them in step quite frequently in these pictures which says that they're a very tight team which is great, that's what we love about them."

For more detailed reads of each image, scroll below. Trust me, you're going to learn a lot.

He's got her back no matter what.

Unlike the other images taken of the newlyweds throughout this day, Wood notes that this image, in particular, shows a little bit of tension. "There's a lot of tension in their bodies here that I don't think is really them," she explains. "I think it's because they're just packed in closely because all the photos where they're not packed in closely are totally different."

What makes the image look so tense, you ask? "Her head is bowed significantly and I think it's bowed beyond the realms of the hat causing it to be bowed so significantly," she notes. "I think she's just having trouble getting down these stairs where there's no railing. There's a lot of tension, he's biting his bottom lip in this photo and looking at her and I think she must've just been showing some tension and he's just paying close attention to her."

That being said, she says the root of their tension is totally external (i.e the crowd hovering them and the stairs). "I think there are some external things that are affecting her and that he's keyed in on them," she concludes. In other words, through thick and thin, Harry is totally tuned into what his wife is thinking and feeling.

And Meghan relies on her husband to give her comfort during these times of discomfort. "What I notice in this photo, along with all of the rest, is her touching him," Wood highlights. "In this sequence of photos there's a predominance of her reaching out to touch him, which she's always done. She's done the sort of 'playful around the arm' and 'on the back' in photos even before they got married. But in this one, for example, she's holding onto him to get down the stairs gracefully."

They can't hide their happiness.

Once the two are finally away from the stairs and the crowd, their happiness becomes evident. "You can actually see their happiness just from the sides of their faces and, if you look at this one, they're not on stairs or crowded," Wood highlights. "In this one they're more naturally able to just be the two of them. She has her arm wrapped up underneath his."

Aside from being totally comfortable with each other, the couple is also very much in sync. Wood often conducts what she refers to as her "ruler technique," in which she takes her ruler and checks how aligned people are from their chins to their cheeks to their nose to their eyes. "They're both smiling and they're both doing a really nice matching/mirroring head placement to that left and smiling so, if I do my ruler technique, they all align," she says. "They're looking at the same spot at the same moment and their walk is clearly in line as well. She has her elbow bent and, even though it's in the other direction, his elbow is bent off to the right. This shows a happy couple that's in sync."

They love each other immensely.

"I love a couple of things about this photo," Wood gushes. "Let's start at the feet, that's my favorite part of this photo because she's wearing huge high heels and she's managed to stay in step with him. I think one of the things we're seeing in this photo is that she's sort of excited about that. She's smiling a big smile that says, 'Look at us, we're in step with one another.'"

And Meghan isn't the only one feeling overjoyed. "She's having this little bit of fun walking with him and I just love the way he's looking at her in several of these photos," Wood highlights. "It's just beautiful. It's just wonderful. The fact that he has to tilt his head so significantly to do that and he's looking a little bit ahead because that hat's in the way. It's just very, very nice. His hands are full or I'm sure they'd be touching her."

They're totally in sync.

"What's interesting in this picture is that, even though it's very posed, they look like little matching dolls," explains Wood. "You've got the feet together — which is not his standard baseline and not even really her standard baseline. The lower body is slightly at attention, they have their arms and hands very, very much the same way, the shoulders have the same amount of tilt, the head placement with the chin is absolutely in line and their line of vision is the same. I'm assuming they were watching something go by and it's fascinating that in that moment where they were attending or watching something they went into exactly the same placement all the way down to the feet." Two adorable, royal peas in a pod.

You can take the woman out of Hollywood but you can't take the Hollywood out of the woman.

The first thing Brown notes about this video is Meghan's sultry walk. "She's doing that beauty queen/runway model walk, which looks fantastic but it's not what you see a princess do," she explains. "The walk is the one where your feet kind of cross over each other instead of going side by side. That does a couple of things. For one, it accentuates your hips and it gives you a little waggle that you don't see princesses really have. I haven't really seen her do that since she's been part of the royal group. That seems to be markedly different. You know she wasn't right next to the queen when she was doing that and I doubt she would have." And this walk isn't happening because of sheer coincidence, either. "She's making sure everybody looks at her," notes Brown. "Do not fool yourself."

When compared to the above photo of them posing in line with their arms by their sides, Brown notes that "she's going to take the opportunities to show off that sexiness and then she's also gonna fall into line when she needs to, which is cool."

What Wood finds particularly intriguing about the video was the way Meghan rubs Harry's back. Apparently, this isn't the first time it's happened. "That movement that she makes across his back is what I saw when they would go out in public together before they were married," she remarks. "She would occasionally touch his back like that and rub down the back. That's very intimate and it speaks to the fact that they have a wonderful, intimate relationship and it's also an interesting combination of her showing her power because she's coming up from behind then going downwards."

What's interesting about her going up then down is that it displays an inherently maternal instinct. "You're more likely to do a motion like that to your child but the timing of it is fascinating. I'm remembering a lot of video footage I saw of the first time they went public where she does this, but I've also seen a lot of it since then — it seems to be that when she needs comforting she touches him in a maternal way."

Brown also adds that the hand motion delivers a certain level of sex appeal. "She runs her hand down Harry's back which is super sexy that says, 'Hey, he's my man.'"

Cheers to the happy newlyweds who seem to be totally and completely in love!