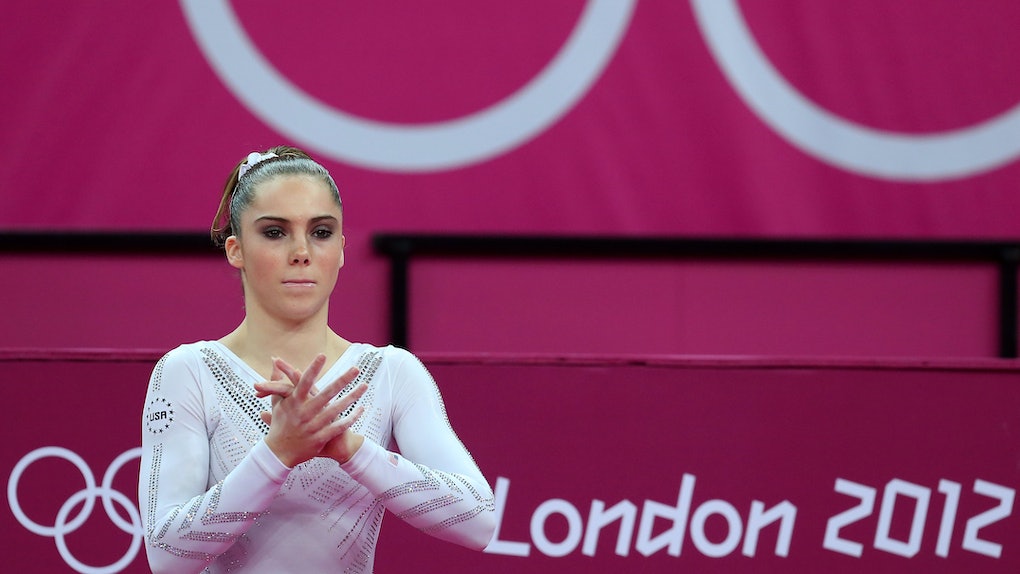 Former Olympic gymnast McKayla Maroney shocked the world when she came forward with allegations of sexual abuse against disgraced athletic doctor Larry Nassar in October 2017. While the cases against Nassar had been going on in courts for months, in the wake of the #MeToo movement, Maroney was the first household name to publicly announce herself as a survivor. Maroney's comments about Nassar launched a wave of other high-profile gymnasts going public with their own allegations, including her "Fierce Five" teammates Aly Raisman, Gabby Douglas, and Jordyn Wieber.

Since coming forward in October, Maroney has been largely quiet — she did not make an appearance during Nassar's public sentencing trials in January 2018, although she did have a statement read on her behalf. But that doesn't mean she's done talking about it. In fact, on April 17, Maroney will be the featured speaker at The New York Society for the Prevention of Cruelty to Children (The NYSPCC) 2018 spring luncheon. The organization was established in 1875 to protect children. This year, Maroney's appearance takes place in the midst of Child Abuse Prevention Month, where the luncheon will serve as a fundraiser for NYSPCC's protection programs.

"McKayla Maroney is an amazing example of a survivor who is now speaking out against someone that was very powerful in his field, and she along with all the other gymnasts brought him down. That is a tremendous success story in the field," Mary Pulido, the executive director of NYSPCC tells me in an interview for Elite Daily. "To have the strength, the stamina, the bravery, the courage, the support to come forward and confront someone like Larry Nassar is tremendous, and it is a huge step forward in the healing process."

Pulido calls the Nassar case one of the most "horrific cases of serial pedophilia I've ever come across in my whole career." Nassar has been accused of sexual abuse by over 250 women and girls. He pleaded guilty to federal child pornography and criminal sexual conduct charges and was sentenced to a total of 140 to 310 years in jail. In addition to his work at Michigan State University, Nassar worked with USA Gymnastics for the women's national team.

Amid the horror of that case, Pulido says, there is a positive impact that can come out of its conclusion. Because it was so high-profile — and because it ended with Nassar behind bars for the rest of his life — Pulido hopes that the Nassar case will empower other survivors of sexual abuse — of any age — to come forward with their accusations, which could mean both justice and the prevention of future abuse from that perpetrator. "I do hope that other children are looking at McKayla as an example," Pulido says.

Maroney came forward with a #MeToo statement on Oct. 18, 2017, in which she claimed she was molested by Nassar. She said in the statement that she wanted to speak up to show that sexual abuse extends beyond Hollywood. She also spoke up to work towards several goals, including holding the people in positions of power "accountable for their inappropriate actions and behavior" and to "educate, and prevent, no matter the cost."

Her #MeToo statement was one part of working towards that goal, and speaking at the NYSPCC lunchon is another part. In December, she began tackling the goal concerning holding institutions accountable. Maroney filed a lawsuit against USA Gymnastics on Dec. 20 that alleged that the organization made her sign a non-disclosure agreement that prevented her from talking about the abuse she faced. USA Gym said in a statement that "the concept of confidentiality was initiated by McKayla's attorney, not USA Gymnastics." Maroney's attorney, John Manly, called their statement "misleading," per NBC News. Jacob Moore, a gymnast at the University of Michigan, and Raisman have also sued USA Gymnastics in recent days. (USA Gym is not commenting on those cases.)

Although she is not directly involved in the changes being made at USA Gym in the wake of the Nassar case, Pulido does expect several outcomes, including settlements and funds for counseling for the survivors and their families (indeed, the organization has announced a fund). However, she says that laws should be changed so that closed systems like USA Gymnastics (or, for example, private schools) have legal requirements to immediately report child sexual abuse claims to law enforcement. She also encourages parents to use the case as a catalyst to both ask organizations their children are involved with about their policies and protocols and to have conversations about body safety with the kids.

"The way that the trial was publicized, the way that the judge let every single survivor speak, the way that the perpetrator was held accountable is the way that all these cases should go. Those of us in the field, we salute the women, the judge, the system," Pulido says. Now, Maroney has even more room to grow and have an impact for kids everywhere.

More like this
These Tweets About Harris & Pelosi At The 2021 Address To Congress Cheer This Huge Moment
By Rhyma Castillo
iPad Pro’s Center Stage Feature Vs. Facebook Portal's Camera Highlights Major Differences
By Lara Walsh
Here's How To Apply For Days Inn's 2021 "Suntern" Position & Earn $10K On Vacation
By Daffany Chan
Stay up to date