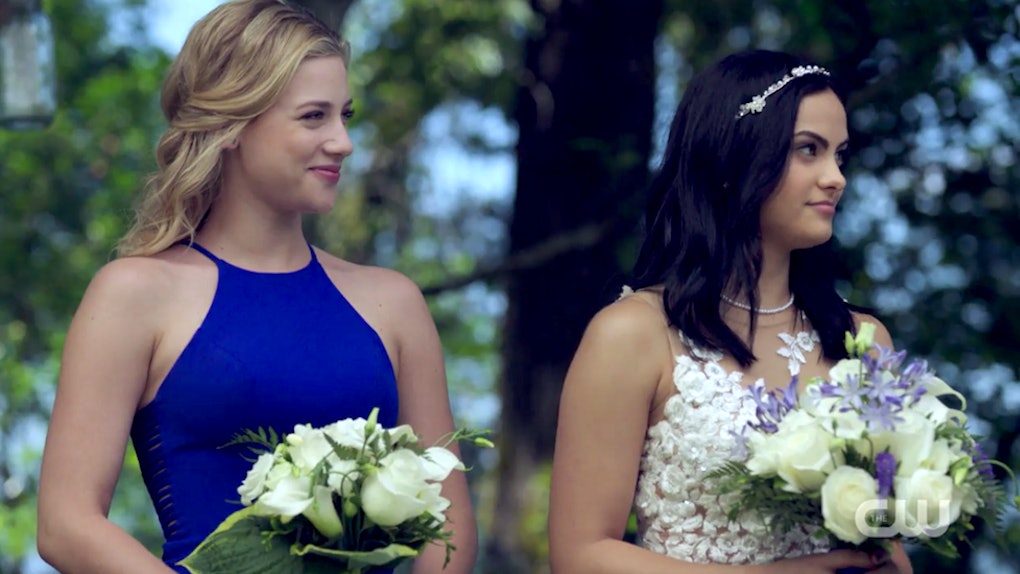 Mayor McCoy & Sheriff Keller Get Married In 'Riverdale' Season 3, So Break Out The Tissues

After all the serial killers and gang warfare, it sounds like there is finally about to be some good news in the town of Riverdale. Showrunner Roberto Aquirre-Sacasa let it slip that the upcoming season of Riverdale will include a wedding that might come as a bit of a surprise to fans of the show. Mayor McCoy and Sheriff Keller will get married in Riverdale Season 3, so get ready to hear wedding bells when the new season starts up in a couple months.

Riverdale showrunner Roberto Aquirre-Sacasa revealed the big wedding news at the Television Critics Association panel this week. As fans remember, Riverdale kind of staged a wedding scene once before, at the very beginning of Season 2. But as it turned out, the wedding between Veronica and Archie was just a dream sequence. Aquirre-Sacasa said that the show will finally feature a real wedding in Season 3:

We haven’t really had a wedding episode. But we might have one in the offing that involves a certain ex-mayor and a certain ex-sheriff.

Clearly, he is talking about Sierra McCoy and Tom Keller. It was revealed partway through Season 2 that Sierra and Tom were having an affair with one another, owing to all the time they spent with one another as the town's mayor and sheriff and the fact that both have distant relationships with their spouses.

Although both Sierra McCoy and Tom Keller are technically still married to other people right now, it sounds like they will both be getting divorces at the beginning of Season 3. Tom Keller's wife has yet to be named, and all we know about her is that she is stationed at a naval base in Bahrain. We have already seen how strained Sierra McCoy's relationship is with her husband Myles, who is rarely ever home due to his career as a jazz musician and when he is home, Myles is openly critical of Josie and fights with Sierra.

Sierra McCoy and Tom Keller will also find even more to bond over after the events of Season 2. Both former government employees are now out of a job thanks primarily to the Lodge family. Hermione Lodge and Cheryl Blossom called for Tom Keller's resignation as sheriff due to his failed attempts to capture the Black Hood, and Hermione also blackmails Sierra into resigning as mayor, taking her place shortly afterwards by winning the ensuing election. I guess we know one family who will not be invited to the wedding.

Along with the wedding news, Roberto Aquirre-Sacasa also teased another major episode that will be featured in Season 3: a flashback to when the Riverdale parents were in high school. Aquirre-Sacasa confirmed that Episode 4 of the new season will be an homage to The Breakfast Club, entitled "The Midnight Club," and it will feature the show's teen cast playing their own parents in the flashback: KJ Apa as Fred Andrews, Lili Reinhart as Alice Cooper, Camila Mendes as Hermione Lodge, Cole Sprouse as F.P. Jones, and Madelaine Petsch as Penelope Blossom.

More like this
When Will 'Riverdale' Season 5 Return In 2021? Its Mid-Season Break Is Long AF
By Rachel Varina
These Clues 'Grey's Anatomy' Is Ending With Season 17 Will Break Your Heart
By Abby Monteil
Are Chloe & Mitchell Dating After 'The Circle'? Chloe Has An Update — EXCLUSIVE
By Dylan Kickham
Stay up to date