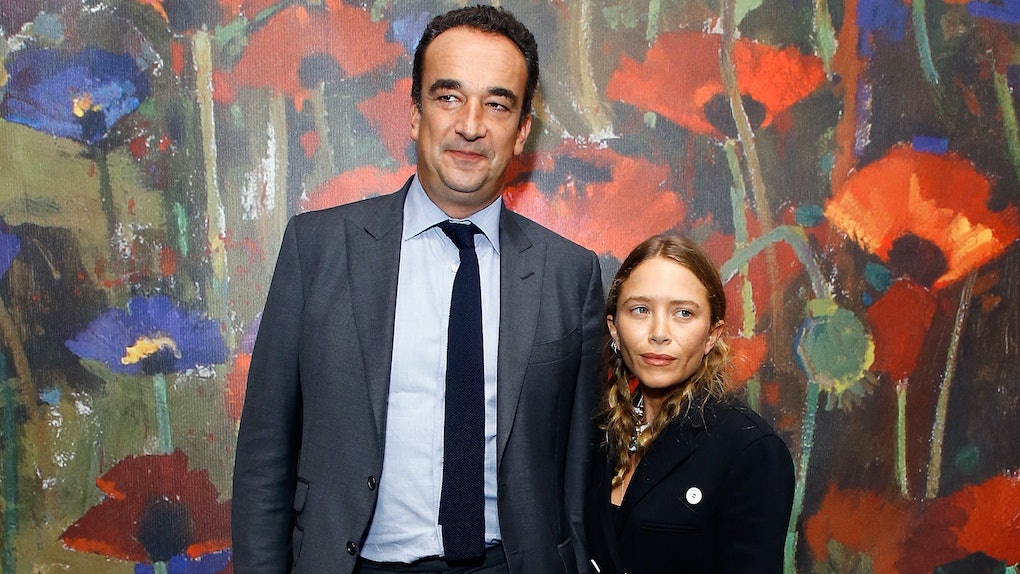 A worldly French banker and a child star-turned-fashion mogul may not seem like the most likely couple, but Olivier Sarkozy and Mary-Kate Olsen certainly seemed to make it work for the five years they’ve been married. It’s not just their varied backgrounds that make their relationship unique, either. Mary-Kate Olsen and Oliver Sarkozy's relationship timeline is packed with endearing quirks — their cigarette-themed wedding (more on that later), their appreciation for equestrian competitions, and their notorious PDA at Knicks games. Fortunately for you, I’m going to delve into them all.

First, though — a little background. Oliver Sarkozy is actually the half-brother of the former president of France, Nicolas Sarkozy. He has two teenage children from his previous marriage who lived with him and Olsen in New York. Ever since he and Olsen were first romantically linked in 2012, they’ve kept their relationship pretty private — which is no surprise, given that Olsen has retreated from the Hollywood spotlight and chosen to focus on her Elizabeth & James fashion line.

Over the years, their public appearances have been few and far between — occasionally arm in arm at fashion industry parties or snuggling and smooching in the stands at NBA games — but rarely red carpet events. And since Olsen doesn't maintain a public Instagram account, fans aren't privy to behind-the-scenes glimpses into her personal life.

So, when Olsen signed a petition for divorce on April 17, the news came as quite a shock to many. (Elite Daily has reached out to the couple's respective representatives for comment on their split, and did not hear back in time for publication.)

While we may not know all the deets about why their marriage didn't work out, let's take a little walk down memory lane — because their relationship history is full of intriguing bumps along the way.

While not a whole lot is known about Olsen and Sarkozy's undoubtedly epic meet-cute, they reportedly first crossed paths at a party in April 2012. The sparks must have been seriously flying because one month later, they were seen celebrating Memorial Day together in the Hamptons. By May 31, a source confirmed their relationship to Us Weekly. So, yeah, they didn't waste any time before getting serious.

As they say, opposites attract — and that definitely seems to have been the case with Olsen and Sarkozy. According to a source who spoke with ET Online, the shy and somewhat introverted Olsen was drawn to Sarkozy's "outgoing personality."

November 2012: They're Photographed Together For The First Time.

It wasn't until six months after they started dating that the paparazzi photographed the couple. Their first pics together were at a New York Knicks versus Dallas Mavericks game at Madison Square Garden in November 2012. The two looked smiley and cozy AF, with Sarkozy's arm lovingly draped around Olsen for almost the entire game.

It didn't take long for Sarkozy to realize Olsen was "The One." In March of 2013, a source revealed to Us Weekly that the multimillionaire wanted "to lock her down for life."

"He calls her 'smart as a whip' and says she's mature for her age," the source told the magazine at the time.

However, she wasn't in any rush.

“Mary-Kate wants to give it more time,” the source said, according to Us Weekly.

In fact, it was later revealed that Sarkozy did attempt to put a ring on it around this time, and Olsen turned him down.

“He tried [to propose] about a year ago, and she wasn’t ready,” an insider told Us Weekly in March 2014. “She didn’t need to be wined and dined. She wanted to make sure he would be good to her.”

More than a year after they started seeing each other, Sarkozy and Olsen finally made their first public appearance together at the Fourth Annual Apollo in the Hamptons Benefit — a star-studded event that benefits the Apollo Theater's education, community and artistic programs.

October 2013: They Attend An Art Auction.

On Oct. 8, 2013, the couple made another rare public outing — to attend the Take Home a Nude Benefit art auction and party at Sotheby's in New York City.

Olsen was reportedly late to the VIP dinner after the auction because she was waiting for the black porcelain sculpture she bought, “Venus of Willendorf Study,” to be wrapped up. I can't think of a cooler reason to be fashionably late, TBH.

February 2014: Sarkozy And Olsen Get Engaged.

After just under two years of dating, Sarkozy popped the question, and the massive vintage engagement ring was just — wow. The Cartier sparkler was purchased at a Sotheby's jewelry auction for $81,250. The 1953 ring features a center European-cut diamond (estimated to be around 4 carats) surrounded by 16 sapphires and single-cut diamonds set on the petals.

At the time, a source told Us Weekly that Olsen's loved ones thought highly of her fiancé.

"Mary-Kate's family thinks Olivier is the best thing to happen to her," an insider told the magazine. "They love him."

Gotta say — after scoping that ring, I have a pretty high opinion of him, too.

Olsen and Sarkozy made their first post-engagement appearance at Diane von Furstenberg's release party for Bob Colacello's book about Andy Warhol. They were full-on #twinsies in all-black ensembles at the NYC event, and at one point, Olsen stopped to get a copy of her book signed by the author.

Not long after the couple got engaged, Us Weekly reported that Olsen and Sarkozy were "talking about trying to get pregnant."

"Mary-Kate has made him a better father," a source told the publication. "She remembers all the kids' special events. ... She thinks he's a great dad."

May 2014: Olsen Discusses Her Wedding Plans.

The Olsen twins' 2014 interview with WWD was mainly about the opening of the flagship store for their fashion brand, The Row. Still, Mary-Kate did pepper in some info about how the wedding planning process was going. When asked if she'd ever consider designing her own wedding gown, she said:

“I’m, like, not even there yet. I think it may be a matter of getting five or six or making two or three and being stressed out. That seems kind of far away. We’ll take one step at a time.”

November 2015: Sarkozy And Olsen Say "I Do," Celebrate With Bowls Of Cigarettes.

Once the vows had been said and the champagne had been popped, new details about Sarkozy and Olsen's nuptials emerged. The swanky Manhattan ceremony, which took place on Nov. 27 at a private 49th Street residence was described as “small and lovely" with about 50 guests, according to Page Six. A source told Page Six that cocktails were served in a rear garden before dinner was served, and all attendees were required to turn in their cellphones beforehand.

As for the decor, it reportedly included "bowls and bowls filled with cigarettes," with everyone smoking "the whole night." Not sure how the guests felt about the environment but I love this for Olsen — TBH, nothing has ever been more on-brand.

March 2017: Olsen Offers A Glimpse Into Her Relationship.

Olsen rarely spoke about her relationship with Sarkozy, which is why her March 2017 interview with Net-a-Porter's The EDIT magazine was so eye-opening. In it, she shed some light on their dynamic, and how they've found some balance between their careers and personal lives.

“I think we’re lucky — [working hard] comes quite naturally for us," she said, referring to her sister Ashley. "But then I have a husband, two step-kids and a life; I have to go home and cook dinner. I ride horses on the weekends. You find the thing that helps you relax and if you don’t have it, look for it. Or you get burned out and then you’re not productive.”

May 2019: The Couple Cozies Up At An Equestrian Event.

The Longines Global Champions Tour in Spain appears to be Olsen and Sarkozy's last public sighting together. Olsen actually participated in the international showjumping competition with her horse Naomi and came in sixth place. Sarkozy was spotted watching his wife from the sidelines, and the two shared a sweet kiss at one point in the Club de Campo Villa. No signs of trouble in paradise here.

June 2019: Olsen Celebrates Her Birthday With Her Boo.

Olsen and her twin sis went all out for their 33rd birthday bash in NYC — which entailed meals at both at the Harry Cipriani restaurant at the Sherry-Netherland Hotel and the Greek restaurant Milos. Naturally, Olsen's husband was in attendance, along with his daughter Margot. Really the only detail you need to know, however, is that the Olsen twins rocked matching "BIRTHDAY GIRL" tiaras, like the total bosses they are.

When news broke that Olsen had signed a divorce petition in April 2020, lots of people were — in a word — shook. After all, a source had just recently told Entertainment Tonight that Sarkozy was "always doting on" Olsen and "making her happy," and they obvi looked blissful as can be on their last public outing.

While Olsen's reasons for wanting to end their five-year marriage are unclear, a source told Entertainment Tonight that the breakup has been "brutal." Complicating matters is the fact that New York City courts are not accepting filings due to the coronavirus pandemic. Apparently, Olsen wants to move on with her life ASAP because she's reportedly asked for an emergency divorce order to hurry the process along.

Here's where it gets a little messy. According to TMZ, Sarkozy's attorneys contacted Olsen's attorneys and demanded that she remove her belongings from their shared NYC abode by May 18. Due to the stay-at-home mandate, Olsen reportedly said requested to extend the deadline to May 30. She has also allegedly claimed that Sarkozy is trying to "force her out" by terminating their lease behind her back. Documents acquired by TMZ show that her emergency court order would help to protect her possessions by preventing her ex from disposing of them.