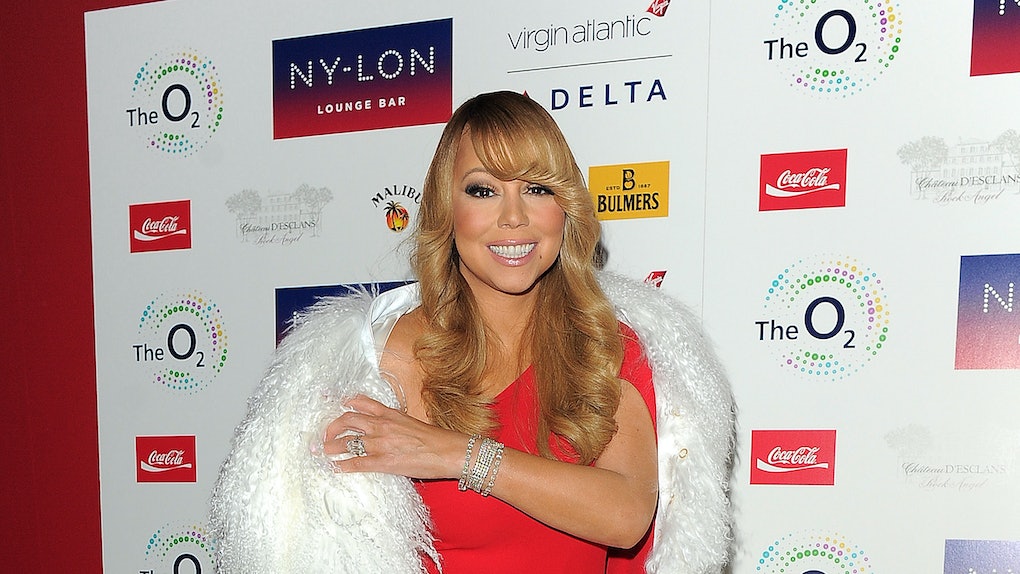 On Sunday, Nov. 1, the queen of Christmas hilariously marked the changing of Halloween season to the holidays with a festive Instagram post. True to form, Mariah Carey’s video announcing Christmas season 2020 showed no one loves the holiday as much as the singer, and she was ready to kick of the holly-jolly festivities immediately after Halloween ended. Get ready to start blasting "All I Want For Christmas Is You," because it's officially the most wonderful time of the year in Mimi's world.

The Grammy award-winning singer gave fans the go-ahead to say goodbye to spooky season and start decking the halls for a Christmas countdown. As Carey's modern Christmas classic "All I Want For Christmas Is You" re-entered the Billboard Top 150 on Nov. 1, she took to Instagram to remind fans to put their scary movie marathons and PSLs behind them with a video that'll make you want to skip over Thanksgiving.

In the Instagram video, a masked man can be seen going through what looks like a haunted house. He opens a door with the words "not yet" all over it, and then Carey can be seen in a snow-filled room next to a Christmas tree. The singer, who is wearing festive red onesie pajamas, excitedly shouts, "It's time!" and pumps her fists in the air. The end of the video reads, "But let's get through Thanksgiving first."

It's not the first time Carey has acted as a festive harbinger. Last year, the singer illustrated her transformation into the Christmas spirit after attending Heidi Klum's annual Halloween party as an '80s rocker. In the video, she falls asleep with her phone, which reads 11:59 p.m., in her hand. At midnight, she's woken up by a call from Santa Claus, who begins playing "All I Want For Christmas Is You." Carey is then seen wearing festive red pajamas as she sings, "Santa, it's time" and blows a kiss at the camera.

As an added treat this year, Carey also employed everyone's favorite witches in welcoming the holidays. In an Oct. 31 Hocus Pocus special, Winifred Sanderson (aka Bette Midler) came knocking on the singer's door, only to have Carey tell her to "scat" because Halloween was almost over and "it's my turn now!"

While it's likely "All I Want For Christmas Is You" will be on repeat in many households until the end of the year, fans have also been speculating that the singer could be working on a new holiday song with Ariana Grande and Jennifer Hudson. Back on Oct. 9, she posted a photo on Twitter that shows three director's chairs with the initials "AG," "MC," and "JH" on the backs of them. She simply captioned the photo with a Christmas tree emoji.

Although Grande and Hudson have yet to confirm if they're working on project with the singer, some fans did notice that Grande's friend Alfredo Flores retweeted the post, then removed the retweet, signaling that he could have accidentally revealed something. Meanwhile, Hudson showed she had the holidays on the mind when she responded to Carey's Nov. 1 video, writing in the comments, "No need, let's go! My Christmas music starts today!"

Only time will tell whether Carey is planning an "All I Want For You" remix or a brand new single, but the queen of Christmas wants us all to know it's officially Mariah Carey season.