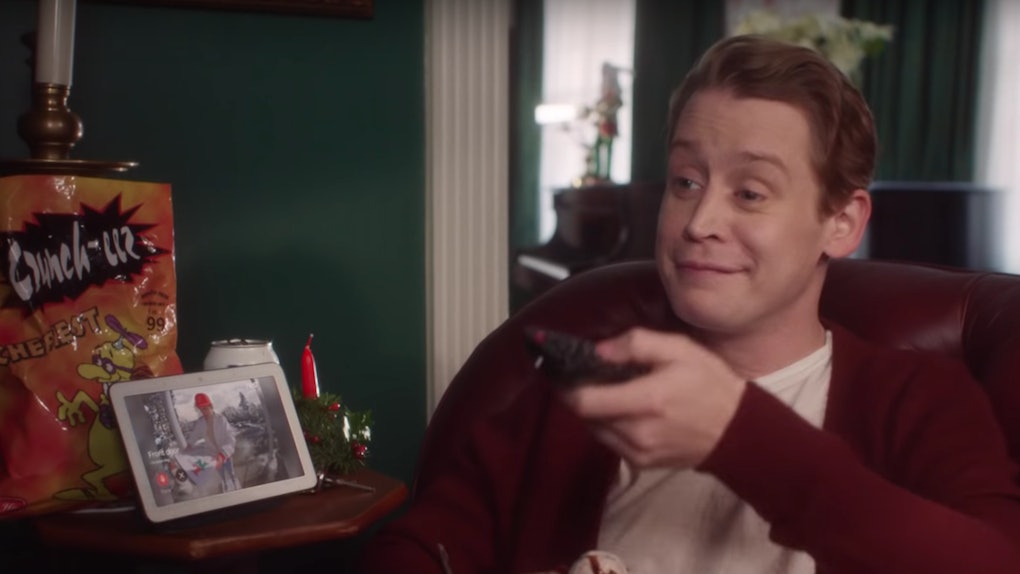 There may be about a million Christmas movies that exist now (thank you, Hallmark Channel), but it is safe to saw that Home Alone will always stand out as a true modern classic. The 1990 comedy was basically every kid's dream come true: total freedom to run around your house and do whatever you want for the entire Christmas holiday. Sure, there were some pesky burglars, but they were nothing that a carefully placed bowling ball couldn't take care of. And now, Macaulay Culkin has recreated Home Alone 28 years later, to show that no matter how much we grow up, we are all still kids at heart when the holidays come around.

The new video comes courtesy of a Google ad. The commercial features Macaulay Culkin back in character as a grown-up version of Kevin McCallister, as he recreates some of the most iconic scenes from Home Alone. We see Culkin wake up in what appears to be the exact house from Home Alone and realize that his parents have once again left town without him. Cue the fancy mac and cheese dinner, the bowl overflowing with ice cream, and some jumping on the bed... although that ends in a slightly different way now that Kevin is no longer a child.

And of course, we also get the iconic scene of Kevin ordering pizza and telling the delivery guy to "keep the change, ya filthy animal" via the movie he is watching. The spot-on recreation works as an ad for Google Assistant, showing how Kevin's time home alone would have been even better if he could have used the "Hey, Google" voice feature to activate security cameras, control the temperature, and even cue up his plans to thwart the Wet Bandits. Check out the full "Home Alone Again" ad below:

And the commercial itself is only part of the fun. Google also uploaded a quick behind-the-scenes video to show the making of the commercial and how Macaulay Culkin felt being back in such a familiar setting. The making of video also gives fans some truly impressive side-by-side images of the original movie and the commercial scenes to show just how precisely they match up. Check it out here:

This is not the first time that Macaulay Culkin has portrayed what a grown up version of Kevin McCallister might be like. A few years back, Culkin played a more crazed and trauma-riddled version of his iconic character in a web series called :DRYVRS. Let's just say that the Google commercial version of adult Kevin is much more wholesome.

And bringing back Home Alone seems to be a trend, because Ryan Reynolds revealed that he is signed on to produce an adult-comedy movie that riffs on Home Alone. The movie is called Stoned Alone, and it will star a twenty-something stoner bro who becomes paranoid that thieves have broken into his home after getting too high. There have not been any casting announcement for that movie yet, so we have yet to know if Macaulay Culkin may pop up in that as well. I think we can all agree that it is always nice to check back in with Kevin McAllister.