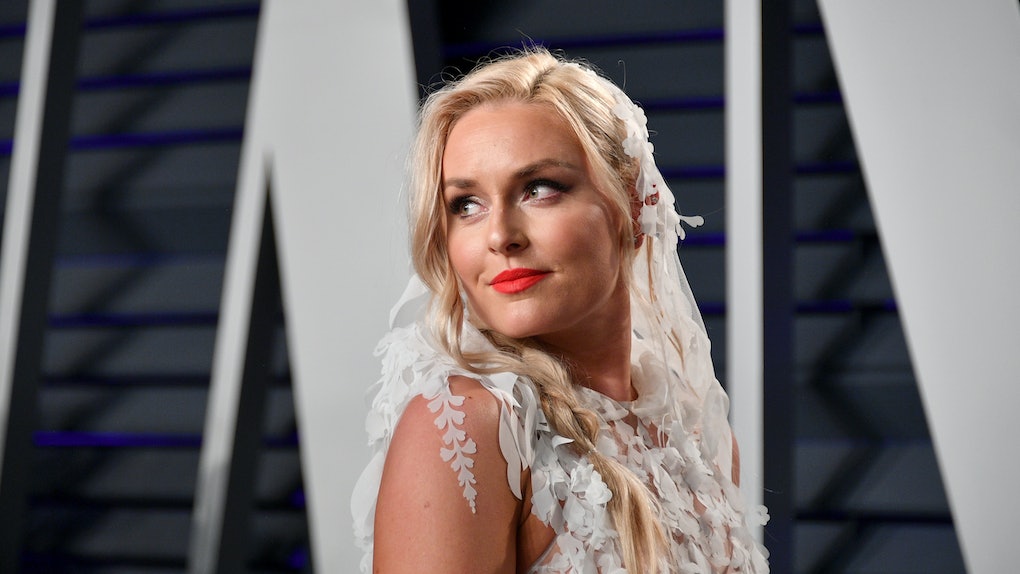 It'd be foolish to assume that, just because someone is a successful athlete, it must mean they never struggle with self-confidence. After all, confidence (and the occasional lack thereof) is something that literally every human being grapples with at some point in their life. Even a three-time Olympian medalist like professional skier Lindsey Vonn has been put to the test: on the slopes, in the media, and yes, in terms of her self-confidence, too. In Lindsey Vonn’s “Letter To My Body” video for Glamour, the athlete read a heartfelt message she penned to her body, and it’s every bit moving as it is emotional. Rather than let criticisms be the focus of her note, the message reads like a touching love letter, in which the 34-year-old athlete says "thank you" to her body for all that it's helped her achieve.

Enduring a series of injuries over the course of her career, Vonn has always persevered. To say that the competitor eats, breathes, and lives the mantra “dust yourself off and try again” would be an understatement at best. In a new feature, Glamour described the retired Olympian as her own “fiercest critic and biggest fan,” and TBH, I couldn't have said it better myself.

But even though Vonn can be highly critical of herself, she's also incredible self-aware. After taking a major spill and enduring yet another knee injury back in February, The New York Times confirmed Vonn's retirement from competitive skiing. It was the tip of the iceberg, so to speak; Vonn was being forced to listen to her body, and simply let go.

“It’s been an emotional 2 weeks making the hardest decision of my life, but I have accepted that I cannot continue ski racing," Vonn announced on Instagram, alongside a collage of photos capturing some of the best moments from her career. She wrote in the post's caption,

My body is broken beyond repair and it isn't letting me have the final season I dreamed of. My body is screaming at me to STOP and it’s time for me to listen.

Vonn went on to note that, for her, retirement itself isn’t upsetting; having to retire “without reaching my goal,” she wrote on Instagram, is what’s truly heartbreaking about her current situation. But if Vonn has any reservations toward her tired body, she’s clearly choosing not to harp on them. Instead, Vonn composed a humbling letter from her heart to her body in a video for Glamour, as an expression of gratitude for all that her body has endured, and all it has helped her accomplish.

To start off, Vonn framed the letter as a “little note” to remind her body of its strengths and resilience. “During the course of your 34 years, you’ve conquered the mountains more times than you can count,” she explained, reminiscing about the times when she’s fallen down, broken bones, underwent surgery, and endured countless stitches. But, through it all, “even after two ACL, MCL, and meniscus reconstruction surgeries,” Vonn continued, her body “stood back up,” looking to finish what she’d started creating: a legacy on the slopes.

"Even though you finally had to stop skiing because you tore your LCL, you still found your way back onto the podium one last time," she wrote, almost as a little reminder to herself that she — as a person, as a body, as a mind — is resilient. Vonn continued,

In the position she finds herself in now, having retired from the sport she's known and loved her entire life, Vonn could easily fixate on the hardships, on the loss, and blame her body for giving out before her mind and heart were ready to turn in (and, TBH, I'm sure no one would judge her for it). But instead, through this letter to her body, in which she's painted a beautiful picture of the bond between her mind, body, and spirit, Vonn seems to be choosing gratitude, not resentment, moving forward.

“I’ve always said, ‘When I can’t ski how I want to ski, that’s when it’s time to finish,’” she told Glamour. Even though there were plenty of people who disagreed with her decision to retire, and even though she, too, seems to be struggling with accepting that this chapter of her life has come to a close, in a sense, writing a letter to her body was the perfect means of closure.

Now the biggest question for Vonn, she told the glossy, is, well, what comes next? What will give her a personal challenge, fill her "with the passion that skiing has always given me," she wondered. Only time will tell what's in store for the gold medalist, but no matter what, with her adaptability and go-getter nature, I have no doubt Vonn will come out a champion.