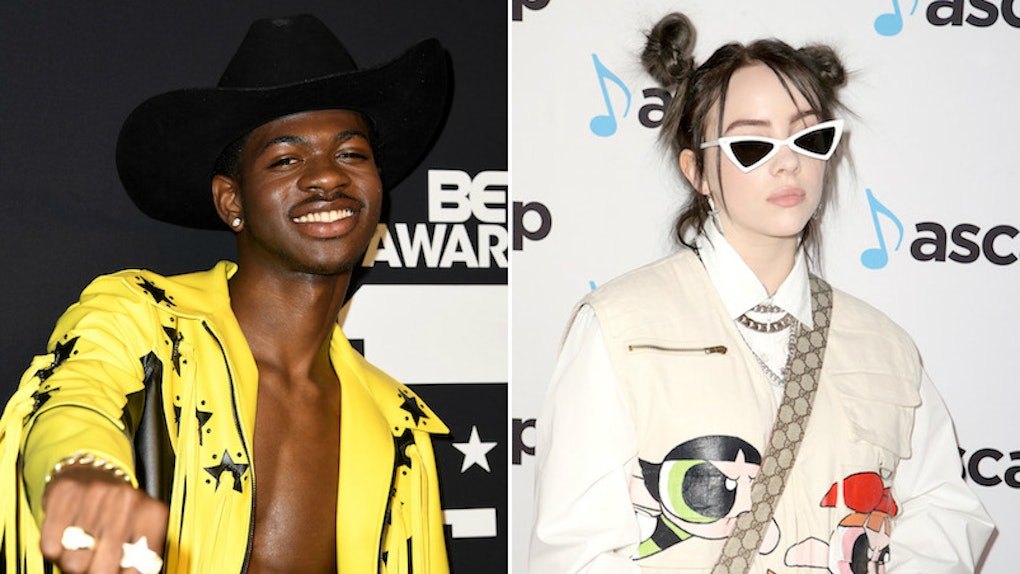 Young people are the future, everyone! I can't say it enough! After spending 19 weeks at the No. 1 spot on the Billboard Hot 100 Chart, Lil Nas X has finally been bumped. Swooping in to take the throne is 17-year-old Billie Eilish and her eery song, "Bad Guy." Lil Nas X's reaction to Billie Eilish dethroning "Old Town Road" is super funny and light-hearted, and came with a little "congratulations" on the side. So sweet.

Lil Nas X and his unlikely partner Billy Ray Cyrus set the record for the longest-running No. 1 song on the Billboard Hot 100 in late July 2019. The thing about hanging out at the top is there is only one place to go from there! Eventually, someone was going to come in and sneak "Old Town Road's" place on the chart, and it's just so much fun that that person happens to be Eilish. She and Lil Nas X's musical vibes couldn't be more different, but that hasn't stopped them from forming a friendly relationship. In fact, along with a congratulatory tweet, Lil Nas X shared a picture of him and Eilish on Instagram. His tweet said, "congratulations to billie eilish!! u deserve this!!" and his Instagram post echoed the sentiment.

However, once all of the niceties were out of the way, Lil Nas X had to throw in at least one self-aware joke.

After congratulating Eilish, he shared a hilarious clip of Squidward, the iconic grumpy animated squid from Spongebob Squarepants, asking for spare change on the street. He captioned the clip, "me when columbia drop me from the label because billie eilish took the number 1 spot."

To be honest, the pressure is a little bit on, Lil Nas X! What's the next single, babe?!

While I'm certain there is an omnipresent fear of dropping off the charts, Lil Nas X certainly seemed to soak up every moment of his outstanding run. When he lapped Mariah Carey and her song “One Sweet Day," which chilled at the No. 1 spot for 16 weeks between 1995 and 1996, he posted an emotional message about his come up. He reflected on "losing faith in what he could be," before finding inspiration one night on his sister's porch. He continued:

...did i know it would become the longest running number 1️⃣ song of all time? 🤔NO! ‼️ but i am so thankful🙏🏾 that this blessing ✨ has been placed upon me🤠. this song has changed my life🤩🤩🤩 and the way i see the world🌎🌍around me🙋🏾‍♂️ in less than a year📈. thank you to every single person☝️ who has been apart of this journey🌄. as i said😯 before, it’s just the beginning! 🖤🤠🐎⚡️

For his part, Billy Ray Cyrus also congratulated Eilish, tweeting, "@billieeilish Well deserved. Your persistence paid off. Thanks everybody. It was a hell of a ride." Very sweet, Bill. (Can I call you Bill?)

Congratulations, everyone! I think you're all good guys!