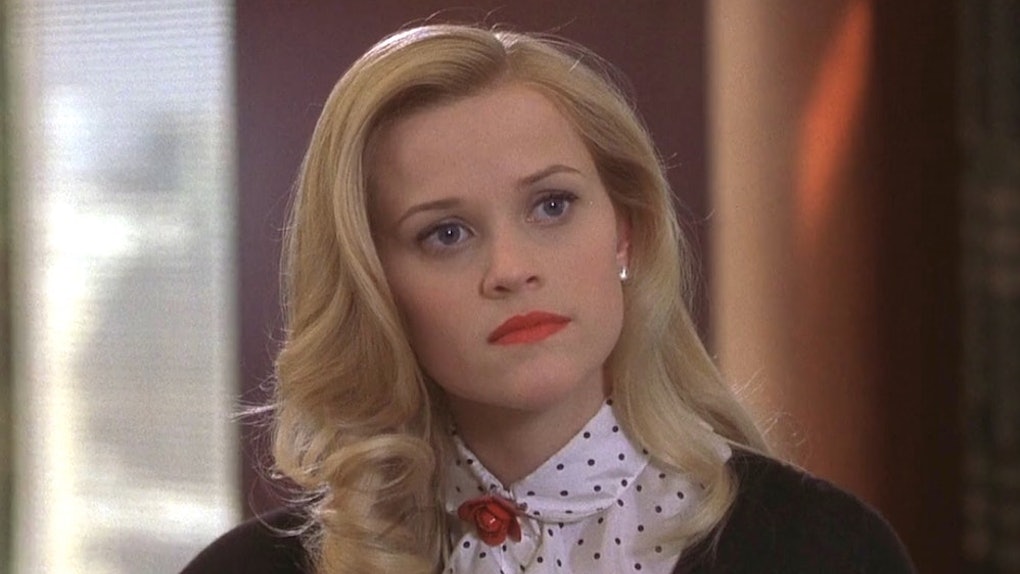 When you hear Legally Blonde come up in conversation, what’s the first thing to come to mind? Blonde hair, chihuahuas, and a lot of pink? The story of a headstrong underdog who came out on top? Personally, I judge a movie not by its characters, but by its memorable soundbites. I can always identify a film by its classic monologues, the heart-hitting one-liners, and sometimes, even if the entire movie was a wash, all it takes is one stand-alone quote to make the whole thing amazing. Legally Blonde may have helped a fan cope with depression with one of Elle Woods' most popular phrases, which just goes to show that even storylines with seemingly silly undertones can be monumentally influential on someone. All it takes is one person to hear the right words at the right time.

Legally Blonde is one of those movies, like Mean Girls or The Notebook, that’s just so quotable. You’ve got the “bend and snap,” virtually any time Elle put ex-beau Warner in his place, and Enrique calling out Elle’s last-season Prada shoes (burn). But then there’s the scene where Elle and the rest of the summer interns are hashing out the details of the alleged murder case, and Elle states, matter-of-factly,

Being a journalist and not a lawyer, I really can’t attest to the fact that happy people never shoot their husbands. What I can attest to is that endorphins really do make you happy, and for one Legally Blonde fan, this nugget of wisdom cleverly strung into the dialogue was apparently enough to change their life for the better.

Legally Blonde co-writer Karen McCullah told Entertainment Weekly she received a letter from a fan explaining their gratitude for the quote that may have saved their life.

One of the things I personally love about film — or any art form, really — is that the artist originally creates it with a goal in mind, and whether that’s to entertain or spread awareness of an important cause, once it’s out in the open, they can never really know how it’s going to affect someone. The fact that this specific quote — spoken by Woods (played by Reese Witherspoon) at a time when she felt desperate to make her fellow interns see that her friend and accused murderer, Brooke Windham (played by Ali Larter), was being unfairly accused of a serious crime — apparently made such a huge impact on someone’s life, McCullah told EW, “blew my mind.”

In an interview with the news outlet, McCullah explained she received a letter from a man who claimed to be suffering from depression, and was reportedly contemplating self-harm when he watched Legally Blonde. A friend later called to invite him to go out dancing, and he told McCullah he declined at first, as he was apparently planning to hurt himself that same night. When he hung up the phone, however, he said he thought back to Elle's one-liner, “endorphins make you happy.” With a change of heart, McCullah explained, he decided to give his friend a call back, go out dancing, and have an amazing time. “That line,” he reportedly wrote to McCullah, “saved my life.”

Not every clever turn of phrase in a film is going to be factual, but according to doctor of psychology and licensed clinical social worker, Dr. Danielle Forshee, the endorphins you release during exercise really can make you happier overall.

“Endorphins are linked to what we know to be a ‘runner’s high,’" she tells Elite Daily, "and they are produced in large quantities during high-intensity cardio and strength training.”

Endorphins are, essentially, pain-killing molecules that signal your brain to feel good, Dr. Forshee explains, and things like exercise and orgasm help release these feel-good-chemicals in your body.

From what I understand, happiness is the result of a few different factors. It’s an emotion, sure, but it’s also a choice; it ebbs and flows as a result of outside influences, and it’s also very scientific. Endorphins definitely have something to do with it, but as far as sport and exercise psychologist, J. Kip Matthews, Ph.D, is concerned, the neurotransmitters serotonin and norepinephrine play a larger role.

So what sort of exercises should you do to reap all the mood-boosting benefits?

It would be all too easy for me to list foolproof exercises guaranteed to make you feel your best all day every day, but the truth is, what works for me may not work for you. I know myself, and personally, I cannot stand repetition. I’m not the type of person who finds a workout they love and sticks to that linear routine for years and years. I love to mix things up; one day, I’ll be following along to a Zumba class, and the next day, I’m sprinting on a treadmill in between lifts at the weight rack.

The best advice I can offer you when it comes to reaching your own endorphin high, is to find workouts you love. Think of exercising like a dessert table: There are a wide variety of options that may or may not tickle your taste buds, but you should at least give everything you’re even slightly interested in a taste. Take a bite out of yoga, pilates, cycling, even swim aerobics. Find what works for you and stick to it. When something no longer resonates with your schedule or interests, dive into something new.

More like this
These 40 Clever Vaccine Selfie Instagram Captions Deserve A Shot On Your Feed
By Rachel Chapman
17 Tweets About Simu Liu In The 'Shang-Chi' Teaser, From Proud 'Kim's Convenience' Fans
By Dylan Kickham
Kristen Wiig Is Making A Musical About Cinderella's Evil Stepsisters For Disney
By Dylan Kickham
Stay up to date