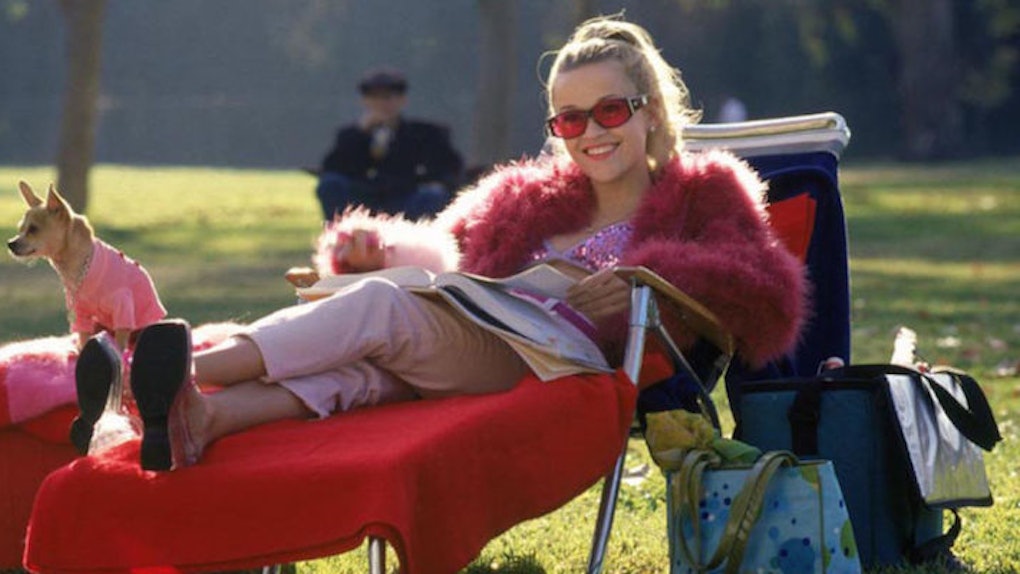 Think really hard and squeeze your eyes closed tight, and you can probably still picture the opening scene: the synth notes of Hoku's "Perfect Day," a blonde sorority sister running through a California mansion and a brush sliding through silken platinum hair.

Although it's been 15 years since "Legally Blonde" hit movie theaters, it feels like yesterday. That's how hard we rooted for bikini-clad legal ingenue Elle Woods.

Watching the movie as a full-fledged adult with a diploma under my belt and bills to pay, I can spot way more value hidden in Elle's journey to lawyer-dom. (As a teenager, I only had eyes for Luke Wilson and his support of Elle's career.) Yes, "Legally Blonde" might be the film predecessor of sharper girl comedies like "Mean Girls," but that doesn't make it vapid.

Don't we all want to root for the unlikely heroine? The girl who's consistently underestimated because of her looks and sexuality? That, my friends, is a oddly modern idea. It sounds like the SlutWalk, like Lean In and every other buzzy quasi-feminist movement we love to follow.

A decade and a half after Reese Witherspoon's Elle Woods and her chihuahua Bruiser first sashayed into our collective conscious, let's take another look. Elle can teach you more about dropping everything for dreams than half the self-help books you already own.

1. Don't get stuck on others' preconceived ideas about you. Elle Woods didn't.

Elle's doting parents and her sorority sisters made a last-ditch effort to keep her from applying to Harvard Law. That didn't stop her.

2. Laser focus is the name of the game.

How many pool parties and Boats 'N Hoes gatherings did Elle have to turn down to keep studying? She prioritized her goal ahead of everything else.

3. Bask in success, but don't let it kill your drive.

Elle has a bit of a lapse period when she first gets to Harvard. Warner may have been her first goal, but it's quickly apparent walking the same marble floors as him isn't enough.

4. Pay attention to others' critical mistakes.

When Elle hears the truth about Brooke's false workout promises ("I WAS GETTING LIPOSUCTION," she scream-whispers), her first instinct is to panic. In reality, girlfriend can learn a lot from the downfall of a person who built her career on lies.

Maybe this one isn't so much career advice as it is general existence on planet Earth guidance, but adult me can't get over that scene in which Professor Callahan calls Elle into his office under the guise of congratulating her. Nobody should have to endure sexual harassment to get to the top.

6. Surround yourself with people who support your goals.

Elle might have found plenty of detractors at Harvard — Vivian and her dull cashmere sweater collection, for one — but she made a point to lean on her team, which included manicurist Paulette, as well as Margot and Serena. Not to mention Emmett, who's positively dreamy, but I digress.

7. Don't be afraid to take the reins.

Elle had a way to win the case. She knew it, but everyone else wasn't convinced. Still, that tiny, blonde firecracker pushed to take center stage. If you know you're doing the right thing, push for it.

8. Reach out to the people who helped your dream happen.

Networking is crucial when you need something or plan to make a career move, but after you've reached your goal, what do you do? Thank your connections, just as Elle did with Paulette.

In the final scene of "Legally Blonde," Elle delivers her commencement speech and shares all the ways she made her dream happen. Always be on the lookout for ways to pass on what you've learned.