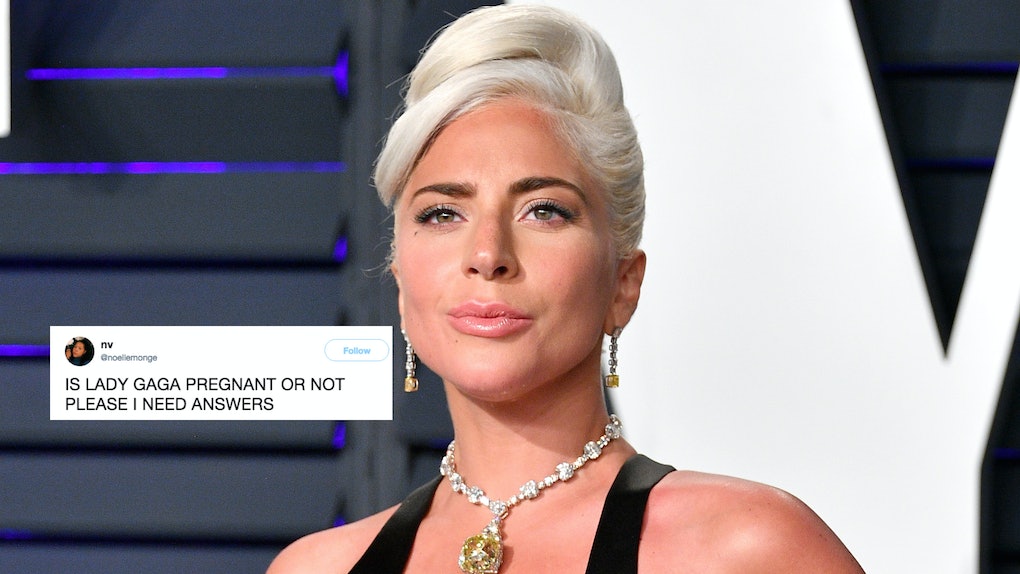 Yesterday, I was in Rite Aid getting some makeup. When I got to the checkout counter, nearly every magazine on the stands had headlines like, "Lady Gaga Is Pregnant!!! And It's Bradley's!!!" splashed across them. When I got home, Gaga (the mystical queen she is) had already tweeted about the rumors, as if she had read my damn mind. And Lady Gaga's response to pregnancy rumors is the most Gaga response ever. Spoiler alert: she's not.

Rumors have been floating around in the tabloids — and as a result, social media — ever since Gaga and Bradley Cooper's steamy performance of "Shallow" at the Oscars. Suffice it to say, the internet was (and is still) shipping these two hard, but no, she's not pregnant with Bradley Cooper or her ex-fiancé Christian Carino's baby.

What she is expecting, however, is her next album! Praise the Ga-Gods! In a tweet on March 12, Gaga responded directly to the pregnancy chatter and said,

I CAN ALREADY SMELL THE GRAMMYS.

So yeah, to make things really clear for everyone, the only thing Lady Gaga is pregnant with, according to Gaga herself, is musical genius. The Joanne and Star Is Born follow-up is coming.

So enough of this chatter about whether or not she's pregnant with a baby.

She's pregnant with an album!

Gaga's little monsters (including me) are already freaking out.

So no, she's not pregnant with any man's baby. She's pregnant with her own musical one! And she and Bradley Cooper are definitely not a thing.

During an appearance on Jimmy Kimmel LIVE the week following her Oscar win, Gaga made it clear that what fans saw go down on the Oscars stage between her and Cooper was acting. People were really shipping them hard after that performance, but come on, dudes. They were literally both nominated in the Best Actress/Actor categories that night. Good acting looks real! They were acting!

"Yes, people saw love," Gaga said to Kimmel with her Oscar sitting with her. "And guess what? That's what we wanted you to see. This is a love song — 'Shallow.' The movie, A Star Is Born — it's a love story."

"So, everything that you saw, the way that it was shot, the way that they pushed the piano out, you saw them put the piano together, us walk up on stage no intro, all of it, that was all him," she continued to tell Kimmel. "And he even also was the one that was like, 'I think that the audience should be lit, so that we're not just lit. The audience is lit.' So then I called Roy Bennet who I work with and he does my lighting and I'm like, 'We need to light the entire room with amber lights because Bradley wants honeycomb and we've gotta give him what he wants.'"

Was it what Cooper wanted, or what they knew we needed? Makes you think.

"From a performance perspective, it was so important to both of us that we were connected the entire time," Gaga went on. "Look, I've had my arms wrapped around Tony Bennett for three years touring the world. When you're singing love songs, that's what you want people to feel." Yeah! How come no one is shipping her with Tony Bennett?!

Gaga closed things off by saying, "I'm an artist and I guess we did a good job. Fooled ya!"

Now that we're all caught up, let's focus our collective energy on the fact that a SIXTH LADY GAGA ALBUM IS COMING.

I'd say I'm so happy she's back, but she's been back. Here's hoping she turns herself into her Oscar for the album cover art.