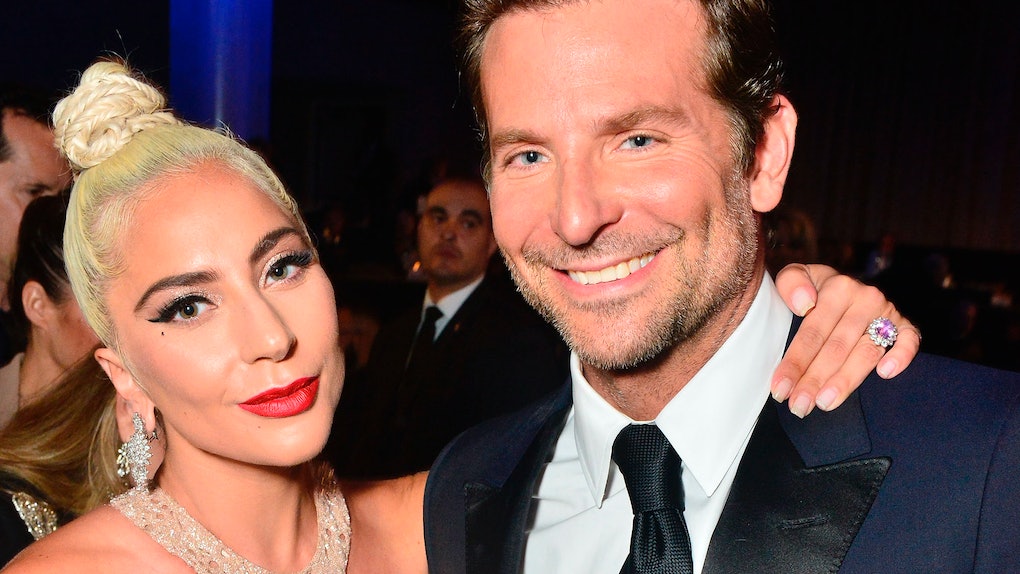 A star has been born, but their name isn't Bradley Cooper. The 2019 Oscar nominations were announced by Tracee Ellis Ross and Kumail Nanjiani on Tuesday, Jan. 22, and Bradley Cooper's name was not among the list of names nominated in the Best Director category. He, Lady Gaga, and Sam Elliot were nominated for their acting performances, but Lady Gaga's reaction to Bradley Cooper's Best Director Oscar snub makes all the snub feelings feel better.

Gaga has been Cooper's biggest supporter of his directorial debut in all of the months since A Star Is Born came out. (We've all seen that 100 people in a room meme by now.) In a statement to the Los Angeles Times on Jan. 22 following the Oscar nominations, Gaga remained just as supportive.

“Well, you know, you never know what’s going to happen," Gaga told the outlet. "But at the end of the day, he knows that he’s the best director in my eyes, and in all of our eyes as his cast. I know that he’s so happy that we’ve all been nominated and that the film was recognized and we all feel really, really beyond elated for the recognition.”

She also told the story of how she heard about the nominations. She revealed that because of her Vegas residency she's now operating on "showbiz time," aka working late nights and sleeping in in the mornings. Because of that, her agent and fiancé, Christian Carino, has been leaving her notes in the mornings telling her if A Star Is Born has been nominated for anything during the awards circuit, but he didn't do that this time, so she thought the film got zero nominations. Oh, Gaga, no!!

"I literally just found out about the nominations a little while ago," she said. "I'm on showbiz time right now, because my shows go so late that usually Christian will leave me a note in the morning if there's nominations."

In total, the film snagged 8 nominations. Not too shabby!

But fans of the film still feel Cooper was snubbed for Best Director.

I guess another one bites the dust. Oh, wait... wrong movie. Oops! Moving on!

Cooper could still win big on Oscars night in the Best Actor category. He's up against Rami Malek, Viggo Mortenson, Willem Defoe, and Christian Bale. The 2019 Oscars will broadcast live on Sunday, Feb. 24, at 8 p.m. EST. And Bradley, remember, there could be 100 people in that Oscars room and 99 of them don't believe in you, but Lady. Gaga. Does.

More like this
Where Is The 2021 Oscars Ceremony Being Filmed? The Location Is So Different
By Umber Bhatti
Here's How To Stream 'Nomadland' So You Can Finally Get The Hype
By Rachel Varina
'He's All That': Premiere Date, Cast, Trailer, Filming News, & More
By Dylan Kickham
Stay up to date