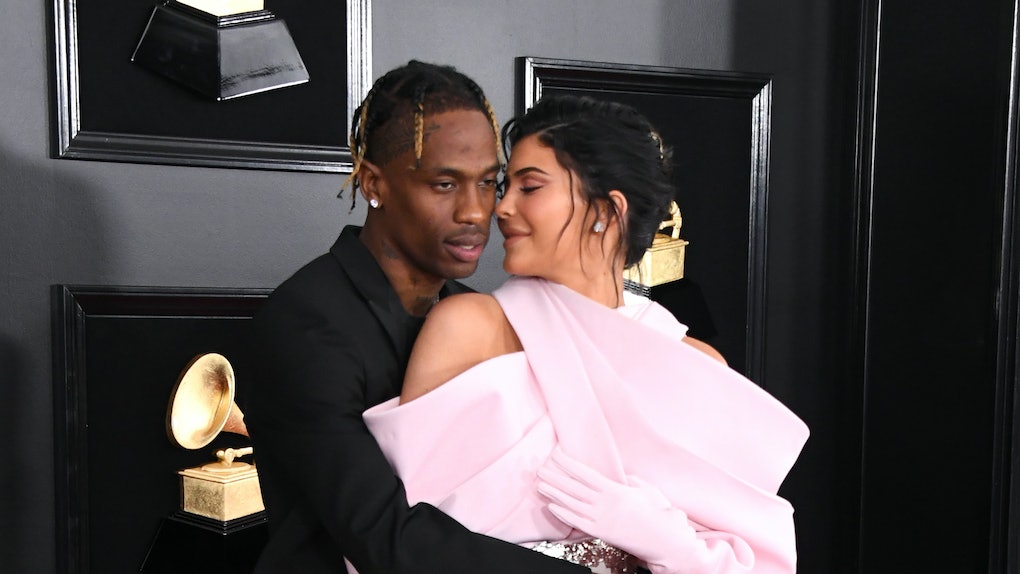 Relatable might not be the first word that comes to mind when I think about Travis Scott and Kylie Jenner, but the "Sicko Mode" hitmaker's latest Instagram is proof that the powerhouse couple loves Game of Thrones just as much as the rest of us. In an Instagram post shared on Saturday, April 20, the rapper took his GOT fandom to the next level by donning some on-theme threads that you'd likely see on John Snow or Jaime Lannister, and judging from her response, his leading lady is ~stanning~ this look. Kylie Jenner's comments on Travis Scott's GOT-themed Instagram photo are definitely here for the fun role play. For starters, he calls himself Jenner's "husband," and their exchange gets so flirty in the comments section

Just in case you needed some more reassurance that Jenner and Scott's relationship is fully back on track, the parents-of-one's social media interactions have been on fire recently. In addition to showing some major PDA on Instagram while jet-setting into Indio, California for Coachella, the couple have been flirting it up in the comments section — and Throners will definitely be feeling their latest repartee.

Now that the final season of Game of Thrones is underway, I've been jamming out to an on-theme banger that The Weeknd, SZA, and Travis Scott recently dropped as part of Columbia Records' upcoming For The Throne album. The trio appears to be hard at work on an accompanying music video to "Power Is Power," the title of which is inspired by Cersei Lannister's motto from the show, and Scott took to Instagram on Saturday to gift fans a sneak preview of the visual accompaniment to the song.

Alongside three photos of himself stoically posing in some Jaime Lannister-esque armor, the rapper made fans lose it when he just oh-so-casually dropped a reference to himself as Jenner's husband in the caption. Comments by Celebs captured the oh-so-flirty convo.

"House of Flame Son of lord Jacques B Webster the 1st Husband of the Goddess K," he wrote, using Jenner's signature butterfly emoji. "Protector of the Seven Kingdoms Blatt."

While the makeup entrepreneur played coy about those "husband" comments, she did have something to say about his sexy cosplay look.

Playing along, she commented, "Oh lord Webster!!" then added, "Protect my realm."

While an inside source recently told US Weekly that "[Jenner] and Travis are in a great place and she has no intention of breaking things off with him," things were on the rocks there for a little bit. Back in February, infidelity rumors swirled around the couple shortly after the whole Jordyn Woods and Tristan Thompson cheating scandal.

At the time, a source told People in March, "She is still devastated about Jordyn and had an argument with Travis after she checked his phone and saw something that she didn’t like."

However, the source maintained, "Travis says he didn’t cheat." Elite Daily previously reached out both Jenner's and Scott's reps for comment on the speculation, and did not hear back.

However, after a romantic getaway together and countless flirty Instagram interactions, it looks like this powerhouse couple is back on track and more smitten with each other than ever. Proof that the couple that GOT roleplays together, stays together? That remains to be seen, but I'm sure I'm not the only one wondering if they could please address those "husband" comments ASAP.