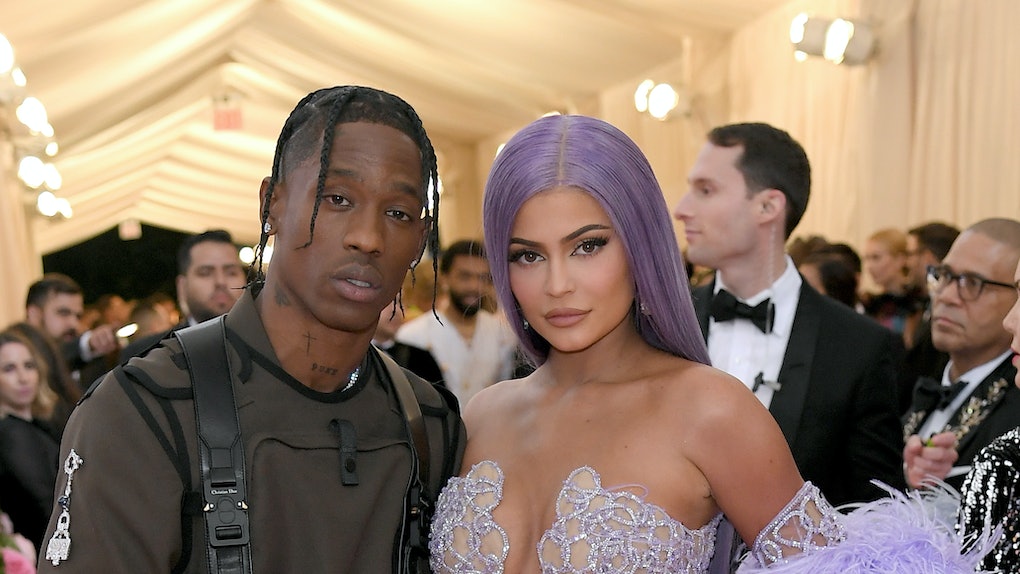 Kylie Jenner Shaded Travis Scott On Instagram, According To Fans

Is a breakup really a breakup if you don't shade your ex on Insta? I'm still not over the fact that Kylie Jenner and Travis Scott have reportedly split, you guys, but I'm not gonna lie — I'm so here for watching all the drama play out on social media. Don't hate the player, dolls. Hate the game. Anyhoo, in case you're somehow not up to speed on the latest Kardashian family drama, the couple has reportedly been dunzo for several weeks now. Elite Daily reached out to Jenner's team previously for confirmation, but did not hear back by the time of publication. And while neither party has publicly addressed the reported breakup yet, Kylie Jenner shaded Travis Scott on Instagram, according to fans, and I am so here for all of this scalding hot tea.

Taking a page right out of her sister Khloé Kardashian's post-Tristan Thompson-breakup book, the makeup mogul hit up her IG story on Oct. 2 to share a video of herself lip-syncing to "Stretch You Out" by Summer Walker. Jenner used a "Louis" filter in the clip that superimposed pink dollar signs all over her face, and the whole thing is just too perfect.

So what are the lyrics our girl chose to mouth to the camera and share with her 147 million followers? Brace yourselves, fam.

And here are the exact lyrics she's singing:

What you on your last breath, your last sweat, your last dime?/ Out of your f*cking mind/ Can't you see I'm f*cking trying/ You want p*ssy six times a week/ And you never wanna clean up

Dayummmmm, sis! The apparent shade was not lost on Jenner's followers, with one fan commenting, "I mean honestly can Travis do better than Kylie? Noooo," on fan account KylieSnapchat's upload of the post.

So how on earth did we get here? Weren't little Stormi's parents just happily vacationing in Italy with their adorable 1-year-old, like, five minutes ago?

According to People, things got tense because Jenner was ready for kiddo No. 2 with Scott, but he reportedly wasn't ready to settle down and, instead, wanted to focus on his music career. Elite Daily previously reached out to both Jenner's and Scott's reps for comment on this claim but did not hear back in time by the time of publication.

"There were several issues that made them decide to take a break," a source told the publication. "Kylie is all about family life and really wants a second baby."

They do make beautiful children, don't they? But Scott reportedly had no interest in adding onto the fam.

"He hasn’t been giving her the commitment that she needs," the source said to People. "Travis isn’t ready to give her all that she wants."

News of Jenner and Scott's rumored split was first reported by TMZ on Oct. 1. A source told the outlet that the couple of two years had reportedly been broken up for "several weeks" and reportedly hadn't been seen together since the Aug. 27 premiere of Scott's Netflix documentary Look Mom I Can Fly.

Whether that's true or not, I don't know. But Jenner did just attend Justin Bieber and Hailey Baldwin‘s South Carolina wedding solo. And in an Instagram post on Oct. 1, she gave fans a look at her smokin' gold gown:

I really hope Stormi's parents can work things out and come back together for their little girl's sake. But in the meantime, the single life sure looks good on you, KyKy!