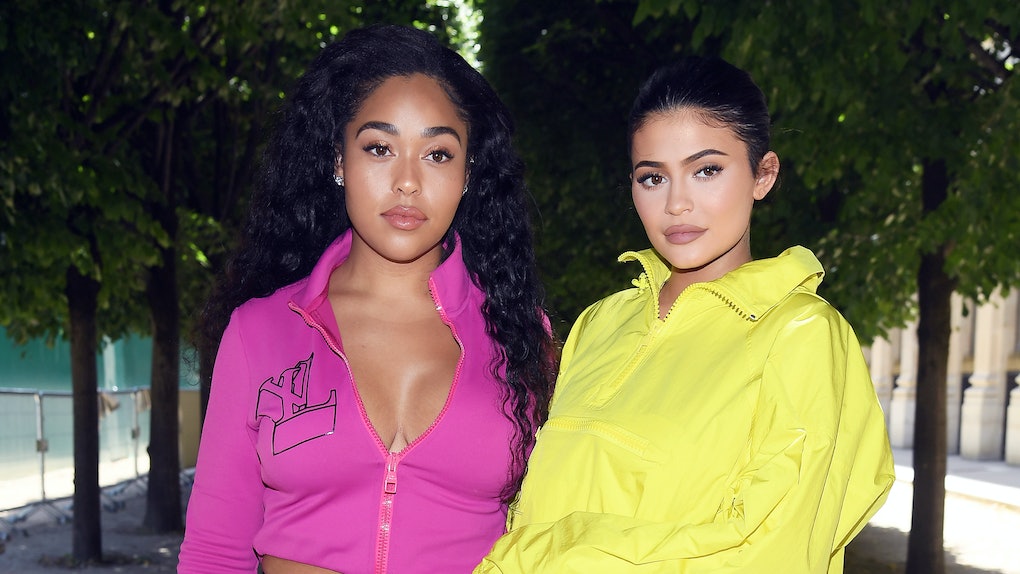 Kylie Jenner & Jordyn Woods' Relationship May Be Over For Good, According To Reports

I'm sorry to say it, Kylie and Jordyn stans, but it looks like Stormi's Aunty Jordyn isn't moving back in. Kylie Jenner and Jordyn Woods' relationship status has been a big "it's complicated" ever since the bombshell news that Tristan Thompson reportedly tried to hook up with Woods at a party at his house in February. Woods reportedly moved out of Jenner's guest house immediately after the drama became public and seems to be living her best life now, but according to reports, Jenner and Woods' future together isn't looking bright.

Both Jenner and Woods are now back to posting on their Instagrams as usual following the intense month that was February, hinting that their lives as individuals are getting back into routine. But those routines no longer include each other, and according to TMZ, that might be the case for good.

A source told TMZ that Jenner and Woods have not made any improvements in healing their broken friendship ever since Woods' appearance on Jada Pinkett Smith's Red Table Talk. Elite Daily reached out to Jenner and Woods' teams for comment on the report, but did not hear back by the time of publication.

According to the source, the two reportedly haven't spoken at all, and Woods' hopes that her Red Table Talk confessional would bridge the gap between her and Jenner apparently didn't work. The source claimed that after that appearance, Jenner was only more convinced that she was right to cut Woods out of her life and that "their friendship would never be the same."

The source noted that there's a possibility the two could be cordial with each other in the future, but Jenner reportedly has no interest in being best friends again.

This report comes not long after a similar report claimed the future of their friendship depended on Khloé Kardashian's feelings.

"Kylie is still figuring out where Jordyn fits into her life," a source told Entertainment Tonight. Elite Daily previously reached out to Jenner and Woods' teams for comment on this report, but did not hear back.

"The biggest reason is because Kylie wants to respect her sister, Khloé," the source said. "Khloé was initially irate at Jordyn and wanted nothing to do with her ever again. However, Khloé is a forgiving person and she's just trying to see if she can get over being hurt by someone she considered a sister."

They continued, "It gets better for [Khloé] every day, but nothing more than accepting what happened at this point. Kylie loves Jordyn, but she loves her sister, Khloé, more and the future of the friendship is directly associated to Khloé's happiness."

Woods told Smith in her Red Table Talk interview that Kardashian's happiness is exactly what she was thinking about when she didn't tell her that Thompson reportedly kissed her at the infamous party.

According to Woods, she was at an afterparty at Thompson's house after a long night of partying. She had gone to the house with the group of people she had spent the night out with. They all reportedly stayed until the early hours of the morning, then as she was leaving, Thompson reportedly kissed her. Woods said that nothing else happened beyond that, but when asked by Kardashian if anything concerning happened at the party, she didn't tell her about the kiss. When the family found out that the kiss had happened, that's reportedly when the trust in Woods was broken. Elite Daily reached out to Woods' and Thompson's teams previously for comment on Woods' side of the story, but did not hear back by the time of publication.

Woods told Smith that she held back the truth to protect Kardashian's feelings. She said,

I know I was trying to protect Khloé's heart. She doesn't deserve this either. People have even dehumanized her in this situation to where they can't feel for her, and it's not fair that she has to deal with this either. And the last thing I wanted to do was be that person. I'm no home-wrecker, I would ever try to hurt someone's home, especially someone I love ... I really just hurt so many more people by not telling the truth ... I know I'm not the reason Khloé and Tristan are not together.

Protecting Kardashian's feelings clearly wasn't the right move, though. Kardashian tweeted that she felt betrayed by someone she loved dearly.

"What’s been harder & more painful is being hurt by someone so close to me," Kardashian tweeted on March 2. "Someone whom I love & treat like a little sister. But Jordyn is not to be blamed for the breakup of my family. This was Tristan’s fault."

Season 16 of Keeping Up With The Kardashians starts airing on Sunday, March 31, on E!, so we'll no doubt hear about this entire fiasco at some point during the season. Hopefully, the new episodes will show fans how Jenner and Kardashian really feel about Woods now.