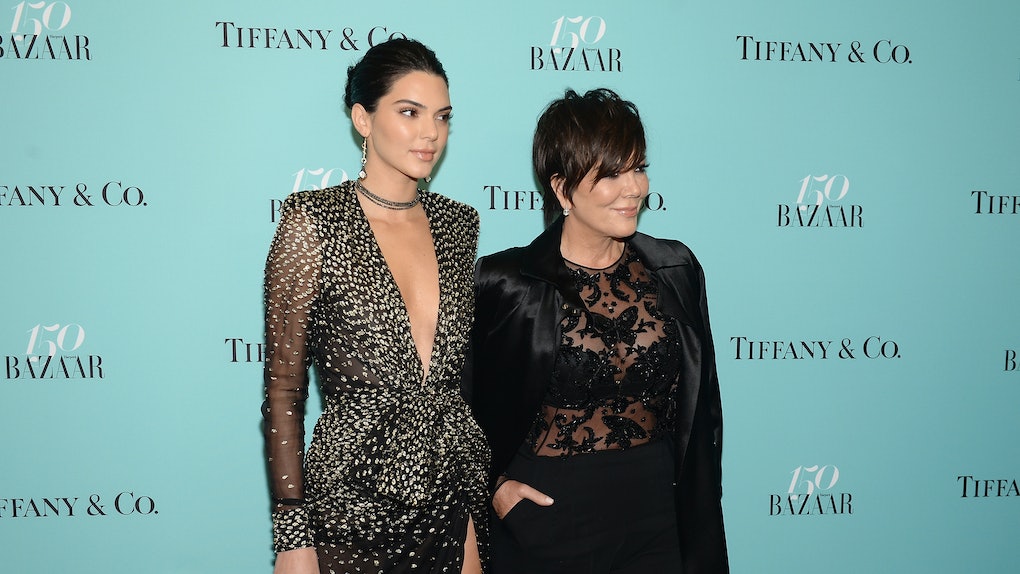 No matter how close you are with your parents, knowing when to tell them about a new boo in your life can be tricky (and, quite frankly, a little awkward). Sometimes, you're not sure if it'll last — and other times, you aren't entirely positive that your parents will approve. So, naturally, you end up waiting a little while before spilling the beans. It looks like this might also be the case for the Jenners, because Kris Jenner's response to Kendall Jenner reportedly dating Ben Simmons shows she might not be totally in the loop yet.

On Thursday, May 31, Terri Seymour from Extra spoke with Kris Jenner at the premier of “American Woman," a new comedy from Paramount TV. According to Extra, Seymour asked Kris about the recent rumors that her supermodel daughter, Kendall, is reportedly dating Philadelphia 76er's basketball player, Ben Simmons. While the reality star's family usually tends to be pretty gossipy on camera, Kris' response shows that the 22-year-old model might not have filled the fam in on her new boy, and her answer was so mom-like.

According to Extra, Kris reportedly responded to Seymour's question about what she thinks of the rumored romance, and said, “I have no idea. You're telling me everything first, right here!”

On the other hand, Kris may have simply been playing dumb on purpose. One time in high school, I went on a painfully boring date, and I texted my mom to call me with a fake emergency. And I'll be completely honest, her performance was impeccable. Tony award-winning, maybe. In this case, it looks like Kris could know absolutely everything going on between her daughter and the NBA star, but since Kendall might not yet be ready to have it widely-publicized, she may have managed to save the day with a tiny little lie. Moms have so many years of experience, and they're almost always down to defend their daughter's honor. Who really knows?

This has me wondering if the dating rumors between Kendall and Simmons are, in fact, true. Many sources claim that Simmons and Kendall have actually been dating for a few weeks, per Page Six. And honestly, are you at all surprised? The couple has been seen together in Los Angeles' Beverly Hills Hotel, as well as in New York City, at Vandal, a trendy restaurant in the Lower East Side. When the two were in New York City together, one source told Page Six, "Security measures seemed to have been taken to ensure Kendall and Ben enjoyed their night hassle free. They were smiling the night away with their friends." So it looks like these smitten kittens may be happy as ever. But again, all of this remains unconfirmed.

This isn't the first time the momager has defended her daughters in the public eye. Earlier in March, when Kylie's pregnancy was still unconfirmed, Kris fought for her youngest daughter's honor. During an interview on Australian radio show Kyle and Jackie O. on 106.5, the host, Kyle Sandilands, mentioned the rumor that Tyga was Kylie's baby daddy, per E! News. Sandilands said that "Tyga was chiming in saying maybe it was his baby," and Kris reportedly shut it down immediately, saying, "Oh no, no no. I think that was just a bunch of silly rumors as usual." Referring to the rumor, Kris added, "Yeah you guys know better than that." Case and point.

It's unclear if Kris is in on Kendall's reported relationship with Simmons, or if she's just playing coy. Regardless, fans still have no idea as to what's actually going on, and I'm not going to be able to sleep until I find out.