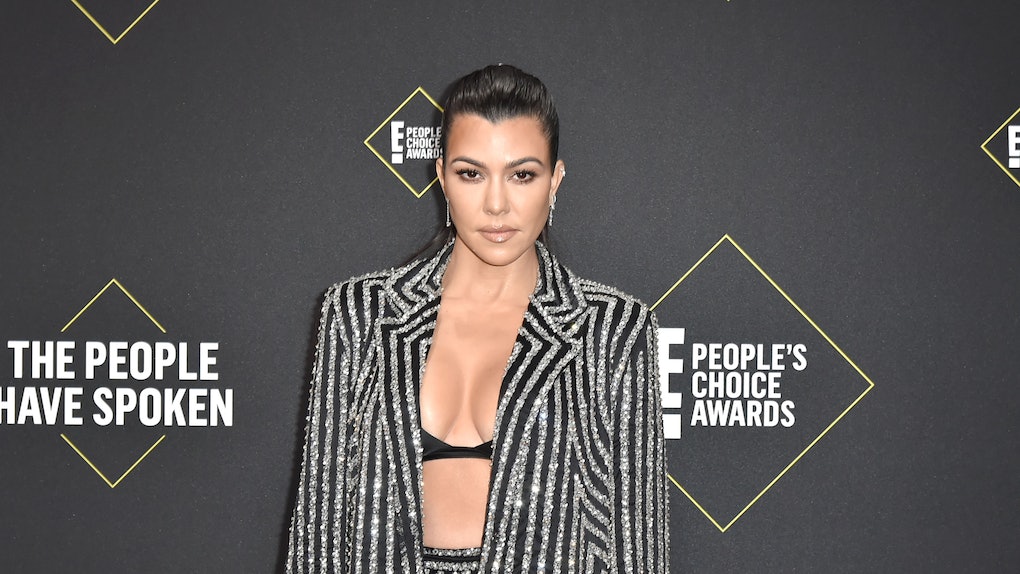 Kourtney Kardashian doesn't hold back when it comes to calling out her sisters for doing something she doesn't agree with. Kourtney's outspoken opinions about other's lifestyles are often a major point of contention on Keeping Up With the Kardashians, making it hard for the Poosh founder to escape criticism when she goes against the very things she's criticized others for. That's exactly what happened to Kourt on Sunday, Dec. 1, when a comment she made about Kim Kardashian came back to bite her in the butt. Kourtney Kardashian's tweet defending drinking bottled water makes a lot of sense. Here's what happened.

During the latest episode of KUWTK, Kourtney lectured Kim about using plastic water bottles. However, as the show went on, one eagle-eyed fan noticed the oldest Kardashian sister sipping from a non-reusable water bottle, and, just like that, she was busted.

"If we're trying to save the world, you need to change, too," Kourtney said to Kim who agreed she'd stop using plastic water bottles.

Pointing to her boxed water, Kourtney added: "I'm only having these from now on."

Kourtney's claim came while she and Kim discussed their mission to help clean the Santa Susana Field Laboratory, but it wasn't more than a few scenes later when Kourtney went against her word and used a plastic water bottle.

Kourtney quickly replied: "I was in Kim’s office and that’s all that was there and no I’m not perfect, but I could have brought a reusable bottle for the day, this is true. #KUWTK."

This isn't the first time Kourtney and Kim have butt heads over their different lifestyles. Fans will recall a hectic season 17 episode of KUWTK that showed the siblings in a heated debate over their daughters' combined Candy Land-themed birthday party. Long story short, Kim wanted the bash to have real candy, while Kourtney was hoping for healthier alternatives to sweet treats. You can revisit the banter below.

For what it's worth, Kourt really does seem to be making an effort to eliminate reusable plastic from her everyday life. She announced in a February Instagram Story that she banned plastic in her home.

While Kourtney's effort to only drink out of reusable bottles is still a work in progress, at least she embraced her slip-up and admitted she isn't perfect.

More like this
Travis Barker Tattooed Kourtney Kardashian's Name On His Chest
By Joyann Jeffrey
Why Did Addison Rae Deactivate Her Twitter? Fans Think This Is The Reason
By Brandy Robidoux
Britney Spears' Instagram Message To Fans "Concerned With Her Life" Is So Positive
By Brandy Robidoux
Stay up to date