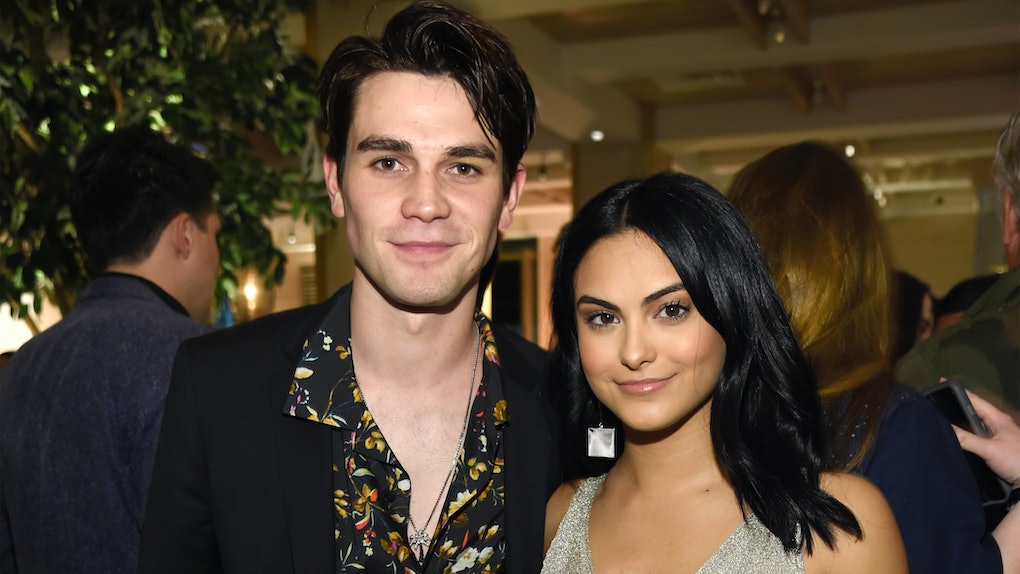 The coronavirus pandemic has led to more sanitizing and less touching than ever before. And apparently, if you're an actor who participates in a lot of kissing scenes, 2020 also calls for good oral hygiene (though IMO, makeouts should always call for a clean mouth). For instance, KJ Apa and Camila Mendes' Riverdale makeouts are prepared for a little bit differently now due to the pandemic, and Apa showed exactly what their new post-smooch prep routine looks like in a Sept. 23 Instagram video. Spoiler alert: It's probably the most 2020 thing you'll see today.

In the vid, Apa and Mendes link arms and chug mouthwash together, which they proceed to gargle for 55 seconds. (I timed it so you don't have to.) Apa captioned the video, "Our new normal is washing our mouths before every take of a make-out scene." The best part: When they're done, they spit the mouthwash out into plastic bags handed to them by a disembodied gloved hand. At least there won't be any smelly breath on that set!

Their co-stars took to the comments section to join in the fun. Lili Reinhart commented, "That sh*t burns 😅," while Nathalie Boltt (who plays Penelope Blossom) wrote, "Ohhhhh. Sexy." Bernadette Beck (Peaches 'N Cream) asked, "Can this become the new standard for make out scenes? 😂," but it was Skeet Ulrich (FP Jones) who may have had the best comment: "Spit don't swallow."

Season 4 of Riverdale was cut short in March 2020 due to the coronavirus pandemic, so fans rejoiced when series creator Roberto Aguirre-Sacasa posted a pic on Instagram of him and the main cast in Vancouver on Sept. 14. "After fourteen days of quarantining and months of prep, #Riverdale Season 5 starts shooting tomorrow," he wrote. While it's unclear what Season 5 will bring (besides a major seven-year time jump), it's clear the cast and crew are taking precautions to make sure everyone stays healthy while filming.

Season 5 of Riverdale is set to premiere on The CW at the beginning of 2021, so until then, I'll keep enjoying sneak previews from set (and probably start gargling more often).