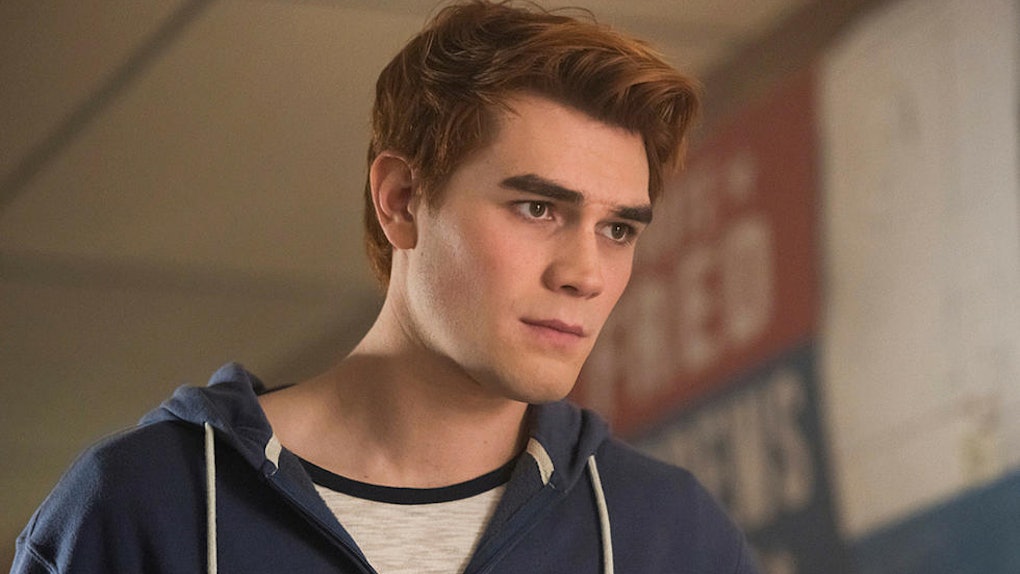 When Season 4 of Riverdale was cut short due to the coronavirus pandemic, fans were left in the lurch waiting to find out how senior year ends for Archie and the gang. Luckily, fans won't have to wait too much longer, since Riverdale production has picked up again and the first photo of Riverdale Season 5 has been released. Series creator Roberto Aguirre-Sacasa tweeted a photo straight from the series' set in Vancouver, and it shows Archie in a pretty ~steamy~ situation.

Aguirre-Sacasa first let fans know the Riverdale cast and crew were back together in person with a photo posted Sunday, Sept. 13. The photo shows Aguirre-Sacasa with several cast members. He wrote:

After fourteen days of quarantining 🇨🇦 and months of prep, #Riverdale Season 5 starts shooting tomorrow. Spent the night in the bubble, reminiscing with these lovely people and celebrating @lilireinhart 24th birthday 🎂 How time flies. Looking forward to seeing the rest of the gang this week. Here we go…🚀

Then on Monday, Aguirre-Sacasa gave fans the first sign of life straight from the set of Riverdale. The photo shows KJ Apa as Archie, doing his usual Archie thing: looking good shirtless in a steam room, of course. Aguirre-Sacasa tweeted: "Annnnnd #Riverdale is back. First scene up of Season 5: Archie in a steam room. Even in a Covid world, some things never change..."

Since production on Season 4 was cut short, the last three episodes of the season went unaired. Season 5 will begin with those three episodes to close out the Season 4 storylines, so this steam room shot is most likely from one of those first few eps. Audiences will see the end of the gang's senior year, including their prom and the conclusion of the Season 4 videotape mystery storyline. After that, Riverdale will jump ahead in the series timeline... a whole seven years into the future.

During an appearance on The Tonight Show, Lili Reinhart said of the new season: "We're taking the first few episodes to finish Season 4 technically, and then Season 5 we're actually doing a, I believe, seven-year time jump in the future. We're not gonna be teenagers anymore. I'm psyched about it... I think it will be nice to play an adult."

It'll be exciting to see how Riverdale handles such a a big change in Season 5, but one thing is certain: There are sure to be some steamy moments in Season 5.

Season 5 of Riverdale is set to premiere on The CW at the beginning of 2021.

More like this
When Will 'Riverdale' Season 5 Return In 2021? Its Mid-Season Break Is Long AF
By Rachel Varina
This 'The Handmaid’s Tale' Season 4, Episode 5 Promo Shows June In Chicago
By Ani Bundel
'Stranger Things' Season 4: Cast, Premiere Date, Trailer, & More Info
By Ani Bundel
Stay up to date