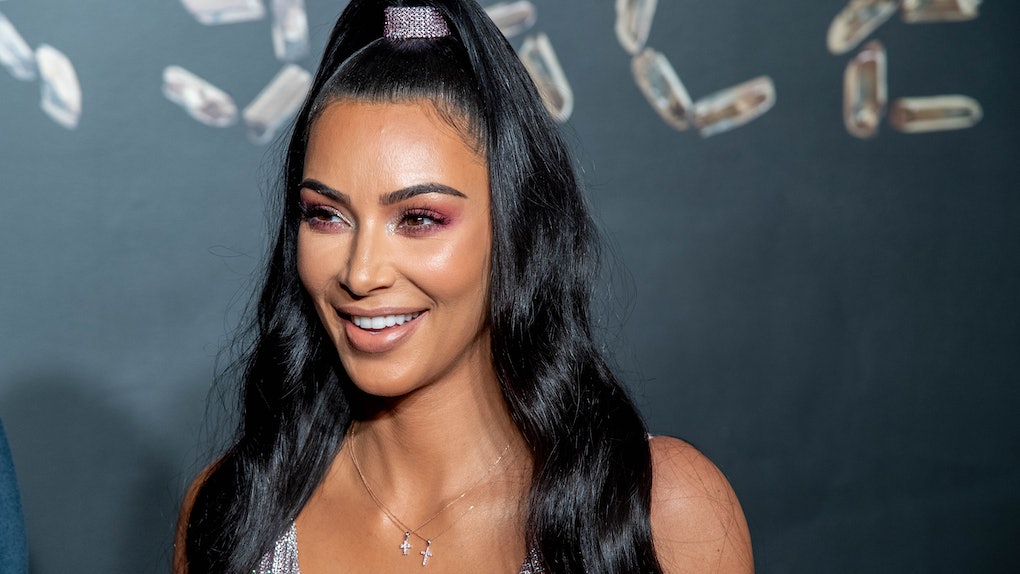 The internet has had a bone to pick with Kim Kardashian and Kylie Jenner lately. The sisters have been accused of repeatedly lifting Naomi Campbell's past looks without crediting the model for the inspiration. Elite Daily previously reached out to Kardashian and Jenner's teams for comment on these accusations, but did not hear back. Now, Kim Kardashian's response to accusations she's copying Naomi Campbell is here. And while it's simple as hell, it nips these accusations in the bud. (Or at least, Kim probably hopes it does.)

Kardashian and Jenner are always posting photos of their latest fashion looks to the 'Gram. Their looks as of late, however, have looked eerily similar to that of Naomi Campbell's past looks. They haven't been referencing the supermodel as the possible inspiration throughout these posts, leading fans to believe that they were just copying the model with hopes that no one would notice. But fans have noticed, and they have been calling out the sisters on social media whenever they post another picture of another seemingly Campbell-inspired look.

"Once is an accident. Twice is a coincidence. Three times is a pattern," one person tweeted on March 11, including a video that showed side-by-side paparazzi images of Campbell and Kardashian wearing almost identical clothes.

Kardashian and Kanye West attended Chance the Rapper and Kristen Corley's wedding on March 11, and Kardashian wore another dress Campbell wore years ago to the event. This dress is one of those featured in the video the fan posted above.

Instead of saying nothing about this, Kardashian posted to her Instagram on March 24 a series of photos of her look for Chance the Rapper's wedding and gave a shoutout to Campbell.

"Naomi forever," she captioned the post. So there it is. She has admitted that she is emulating Campbell in at least this look. She has not yet commented on the other various looks fans have accused her and Jenner of lifting, but she probably thinks this caption is comment enough.

Before this, people on Twitter were pretty heated that Kardashian was wearing what appeared to be the same exact dresses as Campbell without mentioning her name at all.

"Kim stealing the exact same looks that miss Naomi Campbell wore in the 90s and trying to pass them off as her own. Literally what," another Twitter user tweeted, including more pictures of Campbell and Kardashian.

This is one of the dresses/looks fans of Campbell were calling Kardashian out for.

She wore it to a Versace show in 2018. It's very similar to a dress Campbell wore way back when.

As well as this dress that Kardashian wore to the premiere of Broadway's The Cher Show.

And let's not forget about this head-to-toe leopard number, that was also similar to a Campbell runway look.

And Kylie Jenner wasn't free of this criticism, either.

On March 16, she posted a photo of herself posing in diamond sunglasses and a diamond necklace.

Campbell posted a photo of herself wearing a nearly identical set not long after, saying "MOOD" in the caption. Jenner did not mention Campbell in her caption. Jenner has not commented on any of the accusations like Kardashian has.

It's safe to say that Kardashian and Jenner are getting serious inspiration from Campbell's past iconic looks. It's good that Kardashian finally credited the model in at least a small way, but people on Twitter will probably still be keeping a watchful eye on their Instagrams in the future.