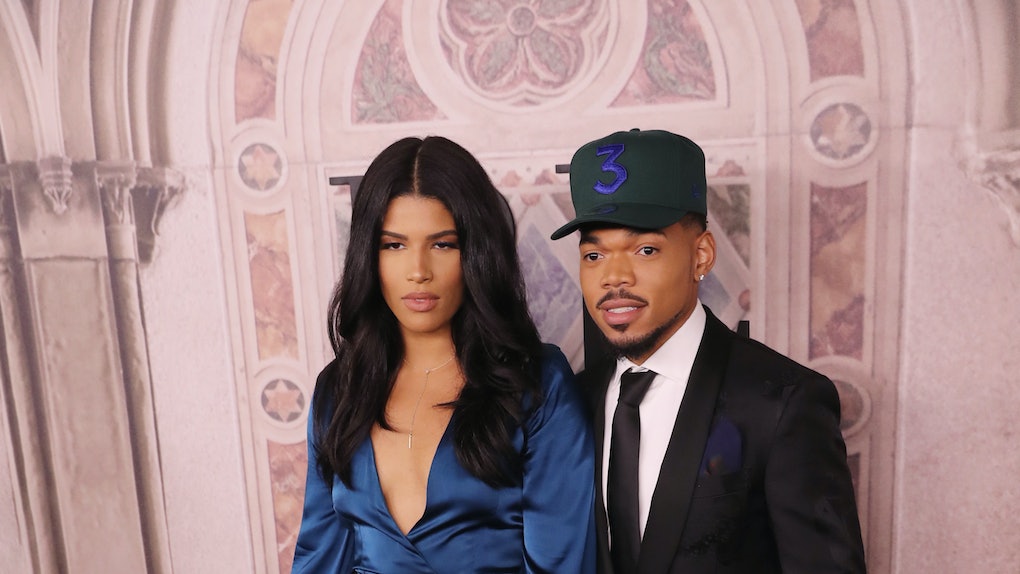 Chance the rapper took to Twitter to share photos from his weekend wedding on Monday, March 11, and the photos are really sweet and showcase the couple’s love for each other.

While the wedding photos don't reveal too much about the actual ceremony, Corley looked gorgeous in a beautiful shoulderless gown and Chance looked sharp in a tux with a white blazer and black pants. In one photo, Chance is holding their daughter Kensli as he goes in for a kiss with Corley. All in all, it seems like the wedding was exactly what Chance and Corley had been dreaming of. And they seem really happy, so it's definitely something to celebrate!

You can tell from the photos of the big day that Chance and Corley had been waiting for this moment for a really long time. Although Chance has called Kirsten his wife for a long time, based on his simple caption on their wedding photos, which reads, "The Bennets," he's simply overjoyed to be able to call Kirsten Mrs. Bennett for real, for real.

The 25-year-old rapper actually revealed to fans on Wednesday, March 6, that he and Corley were going to marry. Chance shared the news on Twitter along with a very heartwarming story about how he and Corley met.

Apparently, the two were just little kids when they met in 2003. The first time they laid eyes on each other, Corley was lip-syncing to a Destiny’s Child song with some of her friends. Chance, who was just 9 years old at the time, was standing watch and basically fell in love at first sight. Here’s how he described what it was like watching Corley lip sync that day:

"This is where my memory comes back in a photographic manner. We were instructed to make way for an exclusive performance by DESTINY'S CHILD!" he said. “This office full of adults, Taylor and myself formed a semicircle and from the back stepped out 3 young girls. Who were not Destiny’s Child.”

So, Destiny’s Child wasn’t there, but Chance was enthralled all the same.

“‘QUESTION. TELL ME WHAT YOU THINK ABOUT ME.' Now I'm locking eyes with the prettiest girl I ever seen in my almost-a-decade of life on Earth," Chance wrote. "I shouldn't even say locked eyes 'cause really, I was just staring at her; as she and her girls were conquering this choreography."

Read Chance the Rapper’s story about meeting his wife down below:

Now, Chance was a performer himself as a kid and when his dad told him to show the crowd what he could do, he shrunk back. And he had a really great reason for doing so.

"It's 'cause I knew I was gonna marry that girl. And I ain't wanna jump the gun," Chance wrote on Twitter. "So I shook my head with anxiety, moved to the back of the crowd and never even introduced myself. 16 years later it's happening. This wknd is the time, and the place is my wedding. I'm gonna dance with my wife because this is my destiny."

Well, he absolutely followed his pre-destined path because now he’s a married man and Corley is the only one that has his heart. So sweet!