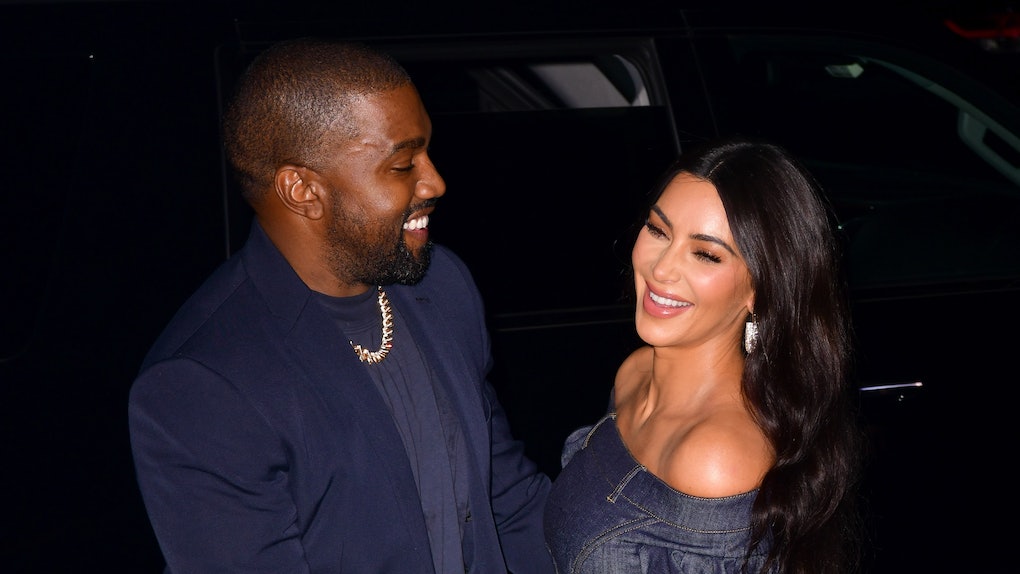 Kim Kardashian’s Quote About Kanye West's Happiness Is So "Simple"

If I had to guess the key to Kanye West's heart, I might imagine packed Sunday Services, Yeezy drops that get snatched up in seconds, and universal acknowledgment that he was, in fact, right about Beyoncé having the best music video of all time. But Kim Kardashian’s quote about making Kanye West happy is actually surprisingly relatable. Apparently, the key to the rapper's heart is a warm brownie à la mode. "He's very simple," Kardashian reportedly shared in the November issue of Stellar magazine, according to the Daily Mail. "If I bring him a warm brownie and ice-cream, he's very happy, and that'll win me points for, like, a good week."

I mean, did you ever think you would have so much in common with a multi-platinum rapper who legitimately refers to himself as "the greatest artist God has ever created" and a full-time reality star/part-time law student? Trust me, I didn't either. But showing love with warm brownies and Dateline re-runs might just be the most relatable anecdote I've ever heard.

In addition to understanding what makes each other happy, Kardashian opened up about the way in which she and West practice compromise in their relationship during a Nov. 5 appearance on The Real.

"I obviously want to honor him and what he's feeling," she told the show's hosts. "And he's been going through this life change."

She continued by explaining that, since having their fourth child, Psalm, in May, West has become a little more careful with the sort of "imagery" he wants around their home.

"He's had this epiphany of being ... a little bit more strict as a dad and being very forceful on the imagery that's in the household and what they see," she explained. "I actually agree with it."

That being said, Kardashian made it clear she's going to stick to her guns when it comes to the topics she doesn't agree with her husband on. "But, I'm always going to be me," she maintained. "So, we had that discussion and that fight. I think, at the end of the day, that's what marriage is." The "fight" she was likely referring to was the one they had over West's reaction to the Thierry Mugler corset dress Kardashian wore to the 2019 Met Gala.

(BTW, she ended up rocking the dress on the pink carpet with West by her side.)

Despite their differences, Kardashian maintained that she's proud of her husband. "Just where he has gone in his life and maybe things that he did a year ago, he probably wouldn't be doing today," she explained on The Real. "And I love that beautiful journey as well and I think that's a great example for our kids. But, you know, there's also that fine line of staying firm and doing what you feel comfortable with. And I take a little bit of him and I hear what he's saying and I totally compromise."

OK, so to recap, the key to a happy marriage for the Kardashian-Wests seems to be a combo of compromise, TV, and yummy food. Relatable.