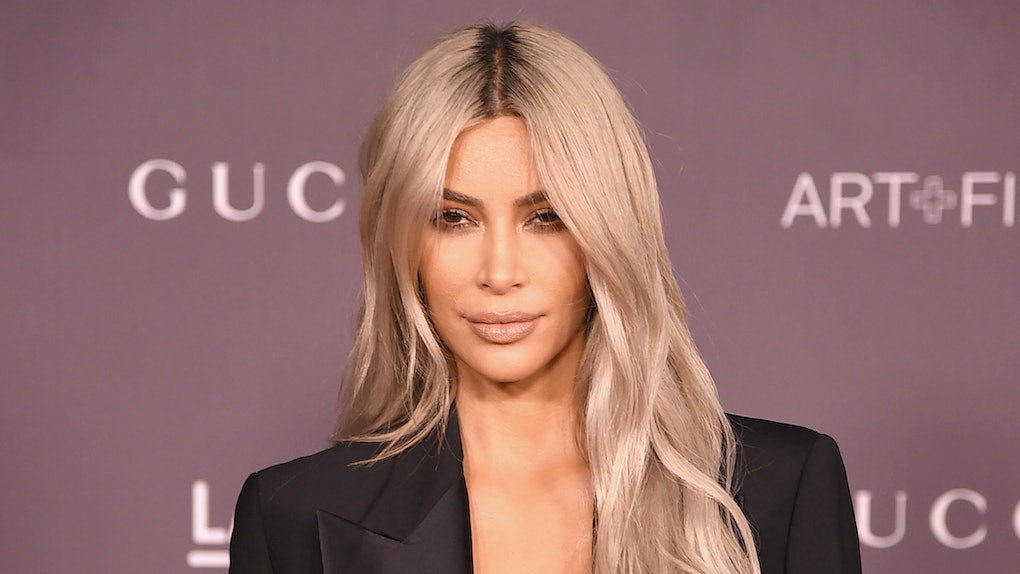 Kim Kardashian's Haircut Is So, So Fierce & Fans On Twitter Are Already Obsessed

Is there anything that Kim Kardashian can't do? The answer is an absolute, positive no, you fool. Kim K is perfection, and everything she touches is basically the equivalent to Midas touching gold. So, when she dyed her naturally gorgeous dark locks platinum blonde in September, it was an OMG moment in like, the best sense. Stunning. Fantastical. You're getting an A+, Kim, well done. But did we really think she'd just give the world a new hair color, then bounce? Of course not. She recently attended a launch party for a children's line called The Tot, and her hair was way, way shorter than her normal waist-length 'do. And when I say that Kim Kardashian's haircut is actual #hairgoals, I am not lying.

Let's start with the fact that her silvery-blonde hair now has deep, dark roots, and it looks freaking spectacular. Sure, when Kim Kardashian has roots it's fashionable and trendy, but when I have roots, I look like the human-version of a garbage can. Sigh.

But the visibly dark roots aren't the biggest part of this bold new hairdo, because, hello, A LITERAL FOOT OF HAIR IS GONE! Like, gone, chopped off, disappeared. And. It. Is. So. Damn. Fierce.

Seriously, just look at this lob.

I'm also going to *completely* ignore the fact that she looks beyond slamming in that cut-out dress, because this post is purely dedicated to that mane of hers. (But seriously, look at her abs. It's not even fair.)

People on social media were shook, confirming that obviously Kim can pull off any haircut and look fantastic:

Vogue Runway is wondering if this cut is Kim's "best haircut to date:"

Don't get me wrong, Kim has had a pretty epic hair history, and there are a few times that previous cuts might come close to this new lob, but I think this one ultimately takes the cake. But, for your consideration, let's take a quick look at some game-changing hairdo's from Kim's past.

When she flaunted hair piercings:

Some people loved it, some people hated it: Back in 2016, Kim debuted a new ~lewk~ called hair piercing, which involves metal bling being braided or woven into your hair.

Yes, if I'm being honest, it looks a little bit like she's channeling her inner Jack Sparrow, but I think it somehow works. Is it the cornrows? The lace-up, thigh-high boots? That "Don't even think of messing with me" gaze? Whatever it is, girl is killing it in my opinion.

When she channeled her inner mermaid:

The Met Gala is a time where celebrities can hold nothing back in terms of fashion. Considering dressing up as a human feather duster? Go for it, Rita Ora! The world is your oyster!

But Kim Kardashian slayed the Met Gala's Red Carpet in 2016, looking chic as anything with her long, dark hair slicked back, like she just walked fresh out of the shower.

Some even thought she looked so good that she crushed all of her competition, including our other perfect human, Beyoncé:

Not gunna lie, that's a tough call right there.

And of course, lest we not forget when her hair "grew overnight," aka when Kim took to Snapchat to show off her thigh-length mane, but understandably, everyone knew it was just a wig — albeit a kickass one.

I think what we all can learn from Kim's new lob haircut is that no matter who you are or what you do, you're eventually going to get a haircut that will be devastatingly awful — that is, of course, unless you're Kim Kardashian. Because every cut, every color, and every trend she tries is pure fire.

This is Kim's world, and we're just living in it.