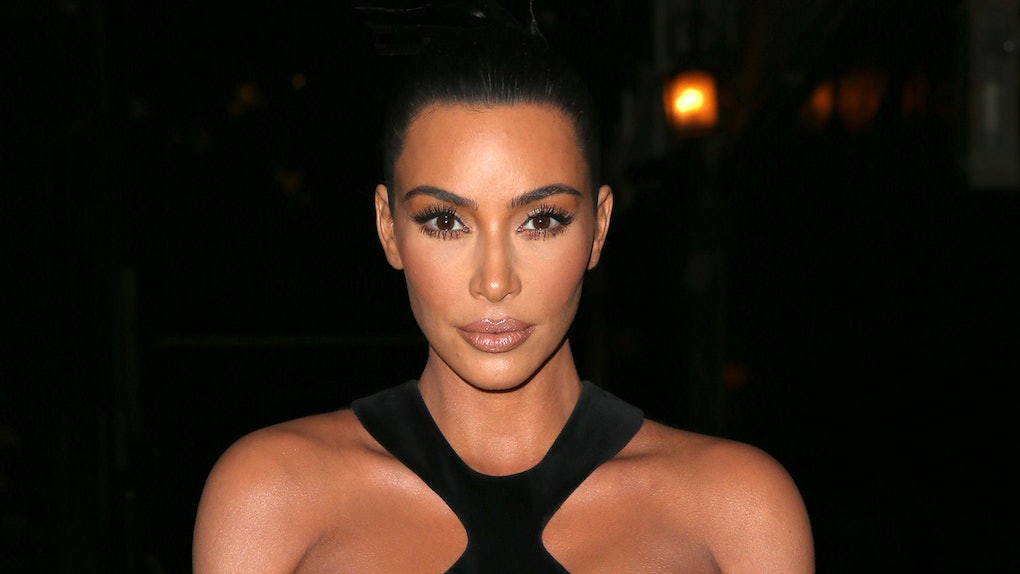 It's not uncommon for celebrities to push the limits with their sartorial choices, especially when black tie soirees and buzzy award shows are involved. But Kim Kardashian wearing a vintage Thierry Mugler dress to last night's Hollywood Beauty Awards went far beyond pushing the limits, instead completely redefining what fearless red carpet fashion looks like. Kardashian is no stranger to pulling out daring looks for industry events (just last week she wore a knockout sequined snakeskin dress while on Jimmy Fallon's Tonight Show) but once you see the Mugler gown you'll certainly understand why it's a step above anything the beauty mogul-slash-fashion icon has worn before.

The dress was pulled from the archives of Thierry Mugler, having originally appeared on the French designer's haute couture spring/summer 1998 runway. Featuring a halter neckline and generous chest and body cutouts, the bodice of the gown completely redefines the word "strappy." One look at it might leave you seriously short breathed, seeing as the dress is basically a wardrobe malfunction waiting to happen. Naturally, Kardashian rocked the look without a hitch all night, cementing her as the absolute queen of audacious style that packs a sexy punch. A thigh-high slit on one side of the skirt finished off the dress, which Kardashian paired with the same futuristic black Mugler bangles that it was originally shown with.

In true social media maven form, Kardashian took to Twitter hours before the event and wrote, "You know that mood when you’re really feeling your look," undoubtedly referring to the gutsy look.

Kardashian was attending the Hollywood Beauty Awards to present the award for Hair Dresser of the Year, which went to her friend, personal hairdresser, and date for the night, Chris Appleton. "I’m so excited to announce this award because I respect glam teams so much,” said Kardashian while on stage before announcing the winner. "They give us life. They truly mean so much to me and so many people in the industry have become some of my closest friends.” Once Appleton claimed his award, Kardashian finished with, "This man changed my life, so I’m so proud of him!"

Kardashian's Mugler dress is the latest such piece to be pulled from the designer's couture archives. Last week, Cardi B wore not one but three vintage creations by Mugler for her appearances at the 2019 Grammys. For the red carpet, the rapper donned the "Birth of Venus" dress by the iconic brand, which you most definitely saw all over your social media feeds. Featuring a sheer sequin bodice, uncountable pearl details, and a skirt that bloomed into a fan of ruffles and created a seashell like effect, the fall 1995 haute couture runway gown completely stole the sartorial spotlight for the night.

For her performance at the Grammys, Cardi B wore a crystal-embroidered tiger-print catsuit from the same 1995 collection. It featured a removable crinoline skirt embellished with peacock feathers and was paired with a hooded purple cape.

And to accept her award for Best Rap Album she wore a white fringe dress that was decidedly more subtle than the other two looks but no less glamorous.

Mugler's having a moment—a very, very exciting one.