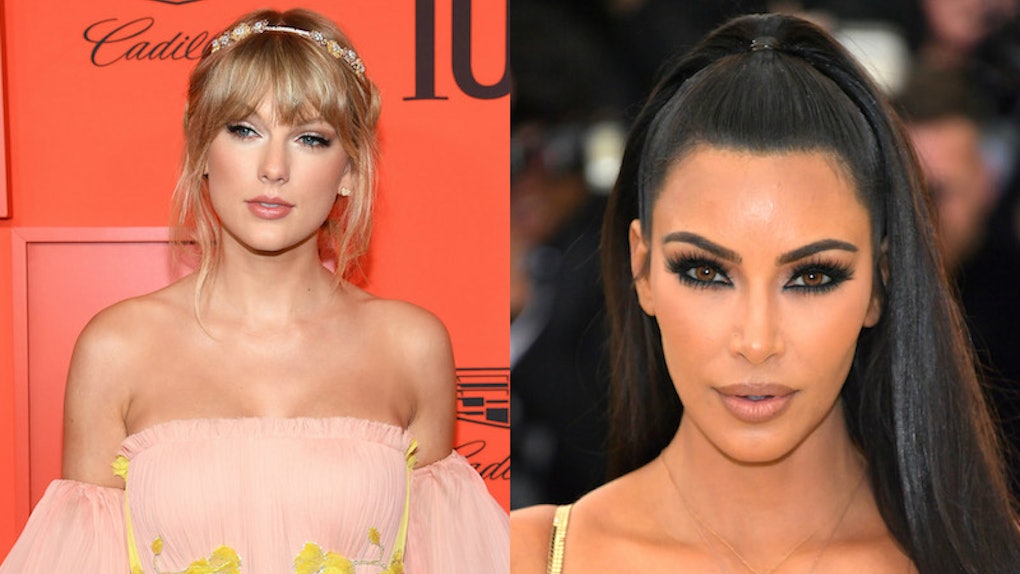 Kim Kardashian Seemed To Shade Taylor Swift's "ME!" With This Instagram Photo

So, the "bad blood" might not be over with Taylor Swift and Kim Kardashian. While it appeared that the two had come to some kind of ceasefire over the past few months, things have started to look different in recent days following the release of Taylor Swift's new song, "ME!" Kim Kardashian seemed to shade Taylor Swift's "ME!" with an Instagram of snake-shaped jewelry, which fits right in line with their beef. Elite Daily reached out to Kim Kardashian about fan speculation she was shading Swift, but did not hear back at the time of publication.

According to Us Weekly, Kardashian shared the post just around the release of "ME!" which dropped at midnight on Friday, April 26. Coincidence? Maybe. After all, the reality star seemed genuinely excited about her new jewels, which include a gold chain with snake charms and snaked-shaped earrings. She wrote in a caption that she was "obsessed" with the gems that appeared to be a gift from from model Sita Abellan.

But get this: The video for Swift's song opens with the snake that defined her deep, dark 2017 album Reputation bursting into a flurry of butterflies. The track, which features Brandon Urie of Panic! At The Disco, is all about individuality and self-love. And it appears to show Swift in a new place — a happier place.

So was Kim K trying to slip in a slithery dig à la the summer of 2017 when Swift's Instagram was spammed with snake emojis? Eh, you be the judge.

While we're on the subject, I'd like to point out that the internet also suspected that Kardashian shaded Swift on April 16. That day, Kardashian announced that she and her lil sis Kylie Jenner were dropping a joint fragrance on April 26 — the same day Swift was set to launch something (which we now know was "ME!") Elite Daily reached out to Kardashian's team for comment on the speculation at the time, but did not hear back. Swifties flooded Kardashian's social media, saying things like, “Honey, nobody cares about your fragrances. 26th of [April] is miss Taylor Alison Swift's day, and And whatever you do, you will not take Taylor's day away." Yikes. (The launch date of the fragrance has since been pushed back for unrelated reasons.)

But Kardashian herself has pushed back on speculation about the Swift feud, which stems from Kanye West's 2016 song "Famous." If you maybe aren't aware, Swift claimed she didn't know of its lyrics about her (West rapped in the song that he "made that b*tch famous" in reference to Swift) before its release. Kardashian, however, claimed otherwise, providing a video that appeared to show that Swift had indeed known about the lyrics in advance. More back-and-forth ensued, with Kardashian fans trolling Swift with snake emojis and Swift saying she had been "falsely painted as a liar." The singer eventually went into reclusion before making her big return with Reputation.

After years of feuding, Kardashian has suggested that she's ready to let bygones be bygones. While appearing on Watch What Happens Live in January of 2019, Kardashian even said she was "over it."

"[I haven’t had any communication with Taylor], I feel like we’ve all moved on," she continued, according to ELLE.

ELLE also notes that Kardashian had posted a Snapchat jamming out to Swift's song "Delicate" the same month.

So again, coincidence? Could be.

More like this
Shanna Moakler's Instagram Comment About The Kardashians Is Peak Shade
By Candice Jalili
Is Taylor Swift's "Mr. Perfectly Fine" About Joe Jonas? Sophie Turner's Instagram Has Fans Curious
By Brandy Robidoux
Travis Barker's Birthday Instagram For Kourtney Kardashian Was So Extra
By Lydia Wang
Stay up to date