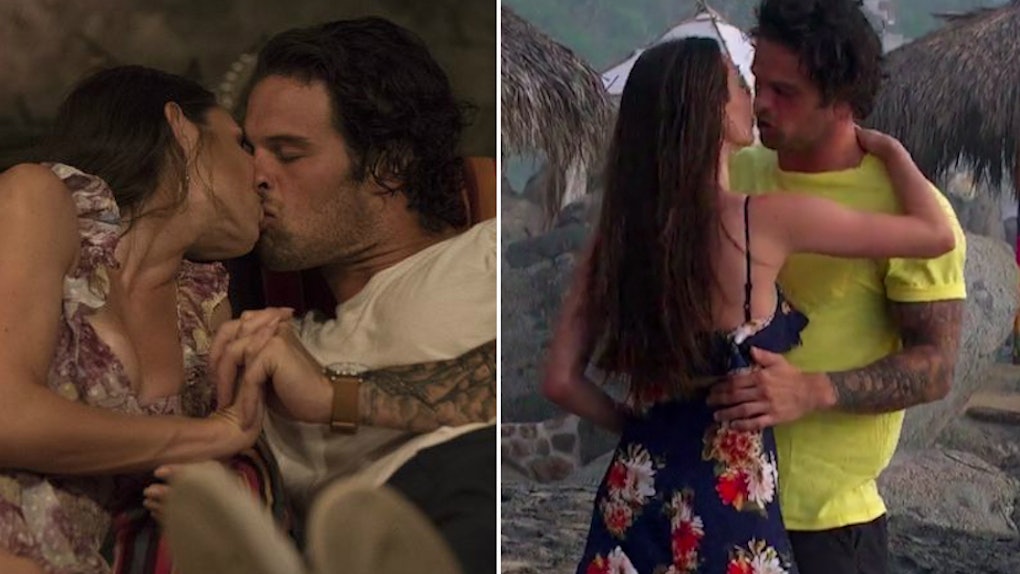 Ah, Bachelor In Paradise — the best of the Bachelor franchise to ever exist, in my personal opinion. The reality show basically consists of attractive people drinking on a beach while desperately trying to form love connections to avoid getting sent home and back to actual reality. It's the most entertaining, and while some of it is certainly more fun to watch than truly realistic, certain couples have definitely captured the hearts of audiences, much like Kevin and Astrid. We can tell a lot about their bond by looking at Kevin and Astrid's body language on Bachelor In Paradise. Namely, is it real? And will it last?

If you aren't familiar with Kevin and Astrid's love story, then allow me to fill you in. The two former Bachelor franchise contestants have been a solid couple since the very beginning of this season of Paradise. Even though Kevin thought he wanted to pursue Krystal at the start of the season, once Astrid arrived, he was hooked.

Fast forward to last week's episodes, when Kevin told Astrid he felt insecure because, on both of the Bachelor franchise shows he was on, he left with relationships that failed. He told her he wished she would have dated other guys instead of just only being with him, so they could be sure of their connection. Astrid (understandably) didn't take this well, but they ultimately made up and things went back to normal.

Here's what experts have to say about the couple's body language on the show, and what awaits them after cameras stop rolling. Does Kevin have a greater chance of making this relationship last? Only time (and body language) can tell!

1. While they were fighting, Kevin seems unhappy.

Obviously, viewers will remember how shocking it was to hear Kevin tell Astrid that he wanted her to go on dates with other guys.

"They're fighting, so he's scowling," body language expert and author Traci Brown tells Elite Daily. It wasn't a pleasant conversation to have, and Astrid was definitely caught off guard. So really, Kevin's facial expression is "natural," according to Brown.

2. Toward the end of their fight, Kevin was still unhappy.

After Kevin explained why he was feeling that way, Astrid started to understand where he was coming from. After all, the hunky fireman has had his heart broken twice before in a short amount of time. But, Brown says that Kevin isn't as ready to move on as Astrid is.

"She's trying to show some empathy and connection," she says. "He's still stuck in his negative feelings."

3. During their date, there was a disconnect.

After the couple made up and unfortunately didn't get a date card, Kevin set up their own little romantic date night on the beach to watch the sunset. However, Brown says that Astrid might not have completely gotten over the fight they had had earlier. "She's only got one arm around him," Brown says. "That's not real commitment."

Yikes. So maybe their fight was more intense than it looked.

4. Their date wasn't all romance.

The date Kevin set up seemed super sweet and romantic to me, but according to Brown, it might not have been as well received as we thought. "There's that pillow between them," she says of their setup on the beach. "That's a barrier."

Again, it seems as though Astrid might have been pretty hurt by what Kevin had said earlier, so maybe she wasn't fully present on their date.

5. Their kiss at the cocktail party wasn't super romantic, either.

Again, at the party before last week's rose ceremony, I personally thought that the two were having a great time. But Brown tells Elite Daily that their body language was off.

"He's not even smiling," she says. "It's more of an angry kiss. Their bodies are separated." Basically, they might not actually be feeling it, y'all.

6. Kevin could also be super controlling.

Last, but certainly not least, Kevin and Astrid shared (what I thought to be) a lovely embrace on the beach. But, according to Brown, that might not have been the case. In fact, "he's trying to control her," she says, explaining that "how his hands are on her mid to upper back," is a sign of control and dominance.

It seems like despite their Paradise romance, these two aren't as meant to be as we thought. Maybe they're both just in it for the summer, or while they were filming they both really thought they could make it work. Sadly, their body language says it all. For Brown, this couple won't last.

More like this
Lauren Speed-Hamilton Is Hosting 'Match Me If You Can,' Your New Favorite Dating TV Show
By Hannah Orenstein
10 'Gossip Girl' Actors Who Dated Each Other IRL
By Corinne Sullivan
Are Olivia Lux & Utica Dating After 'Drag Race'? Olivia Gave An Update
By Dylan Kickham
Stay up to date