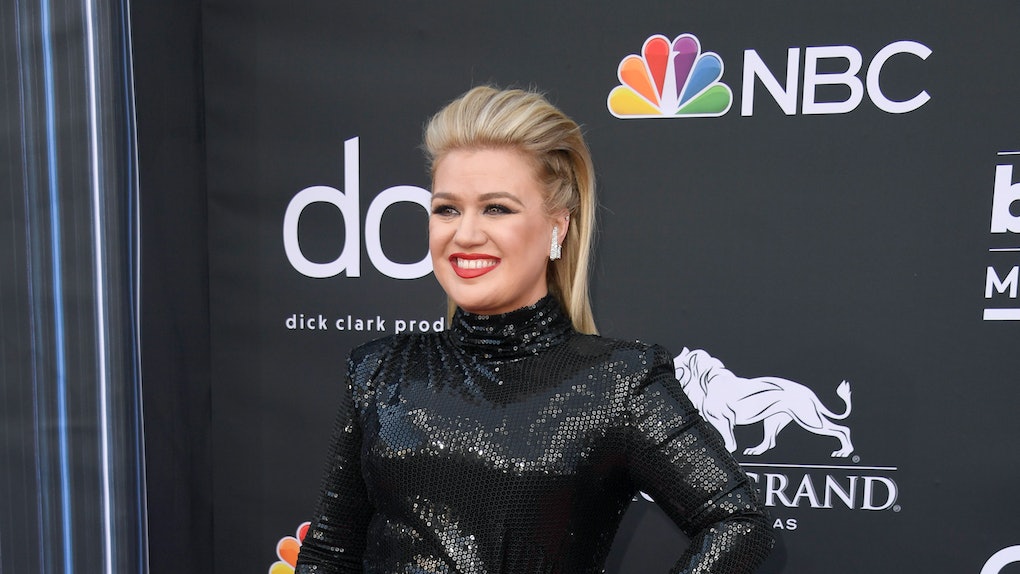 Tonight, it seems as if the host of one of music's biggest annual events might have just stolen the spotlight on the red carpet for a very unexpected reason. Kelly Clarkson's 2019 Billboard Music Awards look featured earrings that legitimately looked like Apple AirPods when viewed from far away, and honestly, it's all I could look at while she was being interviewed by E!. It's no secret that tech and fashion can combine in truly stunning and game-changing ways, but these earrings interpreted the merging of the two industries in a completely different manner.

Clarkson arrived to the awards show looking gorgeous as usual, wearing a floor-length black gown that was covered in sequins and boasted a turtleneck neckline, long sleeves, and a thigh-high slit. It was gathered and ruched in the middle, allowing it to take on a cool amorphous quality, and it was a standout look amongst the sea of purple and ruffles that have been dominating the red carpet thus far. To accessorize the dress, Clarkson opted for heeled sandals featuring straps that span the hues of the rainbow — peeking out from underneath the dress, they're a welcome pop of color. And then, there were the earrings.

While I highly doubt that AirPods were actually the inspiration behind Clarkson's earrings, I do wonder if their designer noticed the aesthetic similarity between the two. From far away, all you can see are two small white objects that drop below each earlobe and certainly don't begin where normal earrings do. Upon closer inspection, it becomes clear that they're not mini plastic speakers at all, but rather, bedazzled earrings in the form of long crystals. The shape of the jewelry is what's confusing — the top of each earring extends up toward the actual ear hole (ear canal?), hence their interesting appearance.

Once you understand the baubles, they actually look quite stunning with the rest of Clarkson's look. (And with Clarkson's giant wedding ring — Brandon Blackstock, you did well!) They offset the black dress nicely while still sticking to a shimmery theme and also look great against her cherry red lips. The singer finished off her beauty look with a smoky eye, which added to her glamorous old Hollywood aesthetic. Seeing as Clarkson is the sole host of the awards show tonight, it makes sense she'd want to incorporate something extra unique into her look.

Clarkson's look tonight is pretty similar to the one she wore to last year's Billboard Music Awards. Both were black, both were long-sleeved, and both boasted thigh-high slits. Both were also glamorous AF, so I understand why she would want to stick with a theme. Why stray from a good thing?

I'll be eagerly awaiting to see if Clarkson will change outfits at any point during the show, but until then, I'm sure my sartorial craving will be satisfied by whatever Taylor Swift, Ciara, Madonna, and more wear when they take to the stage to perform. It's going to be a great show, especially with Clarkson in charge.